If it stars Jessica Chastain, I am IN.

Can you imagine my excitement when the duo star in a dramatic vehicle like ‘Scenes From a Marriage’ together? Off the charts. 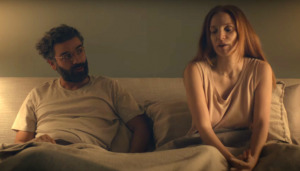 It’s not an easy or fun watch, which is in my wheelhouse.

I’ll choose to watch a dramatic bummer movie or series over a rom-com any day. I want to cry, feel the characters’ pain, suffer with them, and be moved all while glued to my couch.

And that’s exactly what I’m getting so far from the HBO limited series ‘Scenes From a Marriage.’

The five-part series is a modern adaptation, or a remake if you will, of Ingmar Bergman’s 1973 Swedish TV miniseries about a couple’s failing marriage and airs Sunday nights on HBO.

“It re-examines the dilemmas probed by the original, and flips the script on traditional gender roles to explore love, hatred, desire, monogamy, marriage, and divorce through the lens of a contemporary American couple.”

They had me at Chastain and Issac.

‘Scenes From a Marriage’ Cast

Chastain and Isaac have been friends since attending drama school, and their on-screen chemistry was already apparent in ‘A Most Violent Year’ — they are clearly comfortable with each other and that’s immediately apparent in ‘Scenes From a Marriage.’ 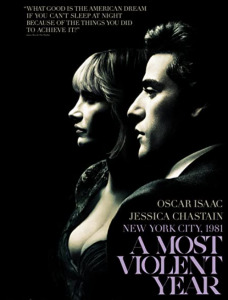 From the jump, you are rooting for the couple. That speaks to the actors themselves, as shown by the viral clip of Chastain and Isaac on the red carpet premiere promoting the show — a candid moment that captures their chemistry.

“In a slow-motion video, Isaac can be seen looking at Chastain and kissing her inner arm, resulting in an internet fixation on the moment,” said The Hollywood Reporter.

God bless the person who decided to slo-mo this video of Oscar Isaac and Jessica Chastain in Venice.

The tender arm stroke, eyebrow raise… they are giving us the red carpet chemistry that we didn’t even realise we needed pic.twitter.com/lFEu9mTc1B

“After the video went viral, Chastain posted a picture of Gomez Addams (John Astin) similarly kissing his wife Morticia (Carolyn Jones) on the arm in an episode of ‘The Addams Family,’seemingly poking fun at her and Isaac’s red carpet moment.”

“Let me just say, though, this is a slow-motion video, and everybody is super sexy in slow motion,” she joked. “I think it was really funny because when you look at it in regular speed, I’m looking straight ahead and he looks over at me. He just kind of goes to give me a peck on my elbow, and at the same time, I’m going to give him a hug. So all of a sudden, his face ends up in my armpit.”

The tone of the show is intimate, as it takes place almost entirely in the couple’s home and has a limited supporting cast. Almost all of the scenes are with only Jessica Chastain and Oscar Isaac — their daughter, Ava, appears intermittently.

Only two episodes have aired, but it’s abundantly clear from the previews that there is trouble ahead. 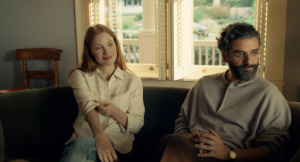 In the first episode, the couple take part in a study on monogamous marriages while seated side by side on their couch. Mira is preoccupied, while Jonathan does the heavy lifting and answers most of the questions.

It continues with them having a unique couple over for dinner, which quickly goes south for their guests, who argue while Mira and Jonathan play peacemakers.

By the end of the first show, Mira reveals why she was preoccupied and she and Jonathan encounter bumpy territory — but they are kind with one another.

If I didn’t know what the series was about, I’d have no inkling of of how the drama plays out.

The next episode explodes as the couple begins to implode and you realize that all was not well in the first place.

About 10 minutes into the second episode, Mira returns home from a business trip and drops a brutal bomb on Jonathan, setting the tone for the beginning of the end as he grapples with what she has divulged. 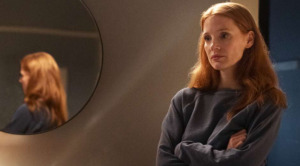 It’s then that the couple’s long-dormant hostility and untapped resentments boil over and detonate — their once-peaceful suburban home turns into a war zone.

I can’t say any more without spoiling the show, but when relationships end, the injured party tends to lash out and say the most hurtful, devastating things — it’s hard to hurt gracefully.

And we get to watch the brutal fallout, masterfully performed by Chastain and Isaac.

What Critics Are Saying

Most of the reviews are focusing on how fantastic Chastain and Isaac are — their acting carries the show.

But the reception for the substance of the series has been lukewarm. 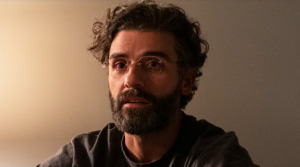 Linda Holmes wrote in her NPR review that “It’s tempting to see this as an extension of HBO’s run of shows about horrible affluent people being … horrible and affluent. To some degree, it is that.

“But the tone is much more intimate and less satirical than in something like ‘The White Lotus’ or ‘Succession,’ and the focus is so much on this one marriage that it doesn’t have those shows’ sprawl.”

“It also doesn’t provide the opportunities other shows do to throw different characters together. Instead, you’re trapped with just these two and their arguments and their spiraling misery,” Holmes added.

Jessica Chastain and Oscar Isaac Make it Worth the Watch

“I don’t think people who sit down with this series will regret the time spent with these actors,” said Holmes.

“There are moments that really do have an impact, and there’s some fine work lighting and shooting the house to emphasize the state of the relationship. (In one scene, Chastain seems to blend into the wall so seamlessly that she’s an unhappy beige blur.) 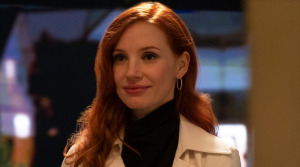 “But don’t expect to leave this show with much of a takeaway about marriage or relationships. As much as anything, it’s a study of how mundane the curdling of love can really be.”

Meh Reviews Will Not Sway Me

Lukewarm or negative “stay only for the acting” reviews never deter me.

It’s actually why I’ll be watching every Sunday night — I LIKE real. I steer clear of sitcoms and movies that end happily (to me, unrealistically), all tied up with a pretty bow after 30 minutes.

I want gut-wrenching, gritty, raw emotion that will leave me WRECKED, feeling as bad as the characters when it doesn’t end well.

Everyone needs a good cry, and I’m excited to spend the next few Sunday nights cleansing my tear ducts with Jessica Chastain and Oscar Isaac.

Are you hooked on ‘Scenes From a Marriage’ or do you prefer lighter TV fare? Let us know below!

For More On The Entertainment And Media Industry, Check Out These Articles:

“Together” Is The COVID Movie No One Asked For, But It’s Fairly Enjoyable

‘What Happened, Brittany Murphy?’ Does Little To Celebrate Her Legacy Keep Reading
Beware! These 10 Terrifying Ghost Stories Will Make You Hide Under Your Covers Keep Reading
Looking For A New Book? This Quiz Will Tell You Which One You Should Read Next Keep Reading
Justin Bieber Superfan Diane Keaton Stars In His New Music Video Keep Reading
Jonah Hill Does Not Want Your Comments On His Body, Good Or Bad Keep Reading
Leave A Comment
Share
Join the Conversation
Cancel reply
shesafullonmonet_ Follow
View Open