This morning, speakers ranging from doctors to athletes to preachers all highlighted the need to advocate for reproductive justice. Now, thousands fill the DC streets and are marching from Freedom Plaza to the Supreme Court. #RallyForAbortionJustice pic.twitter.com/DHBq9zE0d4

This year’s march was organized by groups that included Planned Parenthood Federation of America, the Service Employees International Union, and Abortion Care Network.

We won’t let lawmakers or the Supreme Court take away our reproductive freedoms. Find a march near you: https://t.co/iT1ZFbtaU1 pic.twitter.com/QIU4YKfouj

Across the country, hundreds of other sister marches took place with this year’s focus on reproductive rights after new restrictive abortion laws were passed in Texas and other states.

“We are witnessing the most dire threat to abortion access in our lifetime,” the Women’s March Network said on its website, noting the Supreme Court’s recent refusal to block Texas’ 6-week abortion ban.

“We need to send an unmistakable message about our fierce opposition to restricting abortion access and overturning Roe v. Wade before it’s too late.”

Protesters met at Freedom Plaza, close to the White House, for a “Faith Gathering” at 10 a.m., and a rally hosted by comedian and activist Cristela Alonzo began at noon.

The march began around 1:30 p.m. and continued to the steps of the U.S. Supreme Court. 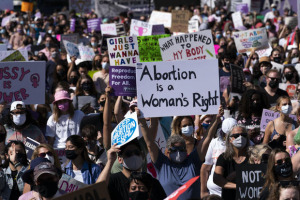 “The reason that many of us are here today is because we want to let people know that we are capable of deciding what is best for us,” Alonzo said. “We can decide what is best for us. We can decide what to do with our own bodies. What we’re asking for is the right to be treated as a person with their own brain, their own heart, to make decisions that are right for us.” 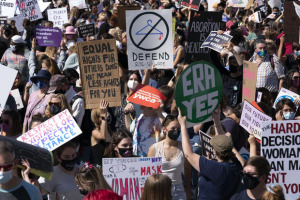 “We demand the human right to survive and to thrive,” Perritt said to a roaring crowd. “We demand reproductive justice and we will not rest until we get it. Join me in saying that enough is enough.”

History Of The Women’s March

The annual Women’s March began in 2017 following the inauguration of former President Trump.

“This march comes a day after the Biden administration urged a federal judge to block the nation’s most restrictive abortion law, which has banned most abortions in Texas since early September,” according to fox7austin.

It’s one of a series of cases that will give the nation’s divided high court occasion to uphold or overrule Roe v. Wade.

“The mission of Women’s March is to harness the political power of diverse women and their communities to create transformative social change.

It continues: “A women-led movement providing intersectional education on a diverse range of issues and creating entry points for new grassroots activists & organizers to engage in their local communities through trainings, outreach programs and events and committed to dismantling systems of oppression through nonviolent resistance and building inclusive structures guided by self-determination, dignity and respect.”

On Twitter, #rallyforabortionjustice was the hashtag users tweeted to show support for the event.

All across the nation today, people are marching to #RallyForAbortionJustice. In DC, organizers say they expect up to 10,000 people to participate as they make their way towards the US Supreme Court. pic.twitter.com/WxkdCcghNW

Comedian Chelsea Handler, who has become an outspoken activist since Trump’s election, made a video thanking people turning out for the march.

We agree with @chelseahandler: *every* person should be standing up for abortion rights, and we’re so honored to have over 120,000 of you alongside us in this fight. #RallyForAbortionJustice pic.twitter.com/PuDPSQyMMi

Senator Elizabeth Warren showed her solidarity with the marchers, saying “The American people support the right to a safe, legal abortion. We’re not going back — not now, not ever.”

The American people support the right to a safe, legal abortion. We’re not going back—not now, not ever. #RallyForAbortionJustice

Some marchers even showed up with their kids — one woman brought her 11-month-old daughter.

The woman told ABC’s Lalee Ibssa “She’s 11 weeks old and mom tells me this is her 1st rally. Her dad is also here.”

We might’ve found our youngest demonstrator! She’s 11 weeks old and mom tells me this is her 1st rally. Her dad is also here. “I’m a father, but I don’t think you have to be to care about these issues..I’m fighting for my daughter’s right to choose.” #RallyForAbortionJustice pic.twitter.com/g8FufIQ3xt

“I’m a father, but I don’t think you have to be to care about these issues … I’m fighting for my daughter’s right to choose.”

Other Marches Across The Country

In Austin, Texas, thousands showed up to stand up for women’s reproductive rights.

Reporter @Newzysteph is on the ground in Austin #Texas at one of many Women’s Marches as thousands of women nationwide protest today for reproductive equity and justice. #CrossConnection pic.twitter.com/6fIivhDvhS 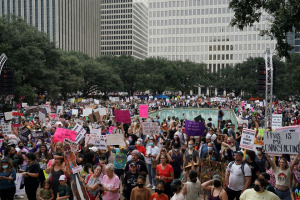 In Stuart, Florida, as part of nationwide rallies organized by Women’s March, pro-abortion rights protesters took to the streets.

And in California, a huge crowd of protesters began their march at Pershing Square and headed to City Hall in downtown Los Angeles.

These are just a few of the scenes from more than 600 rallies planned in all 50 states with over 70,000 people expected to show up.

It’s been said before, but it bears repeating: Banning abortions won’t stop abortions, it will just make women seek out unsafe procedures that could very likely result in death.

Patriarchy & Capitalism: You Can’t End One Without Ending The Other—Revolution, Nothing Less!

BREAK ALL THE CHAINS! UNLEASH THE FURY OF WOMEN AS A MIGHTY FORCE FOR REVOLUTION!

If we return to the days before Roe v. Wade, women are in grave danger. We deserve access to safe healthcare — and abortion is healthcare.

Did you or anyone you know go to a march today? Let us know below.

Women Are Tackling New Opportunities In The NFL