“I can escape to this canvas and create any illusion I want.” -Bob Ross

I’m sorry, what whole thing? Did I spend my nights falling asleep to the soothing voice of a painter icon blissfully unaware of some sort of Ross-ian scandal?

I finally got around to watching Bob Ross: Happy Accidents, Betrayal, & Greed (I know, I’m terribly late to the game) and these quotations threw me. What salacious past could be hidden behind the seemingly innocuous happy little trees, the soothing sounds of brush on canvas that practically invented ASMR?

I can’t help but think that Bob Ross wouldn’t be entirely pleased with the release of this documentary, not only because it unearths some private details, but because it’s pretty clear he was a genuinely humble man who just wanted to teach people how to paint.

I wish everything seemingly mired in innocence could stay that way. Sometimes it seems that all our safe places, all those places of refuge we’d run to in times of chaos, eventually become tainted by some uncovered truth.

I’ve recently (and embarrassingly late in life) learned that reality is messy. Rarely are things ever what they seem on the surface, and when those moments come that rip off my rose-colored glasses and chuck them into the ocean, it’s uncomfortable, to say the least. Can’t things that seem good just be good?

Not here, apparently, and not with Bob Ross’s claim to fame, The Joy of Painting. Even the painter with the “liquid tranquilizer” of a voice wasn’t immune to illness, 80’s sexcapades, and the corporate messes of copyright and profitization.

Bob and the Kowalskis 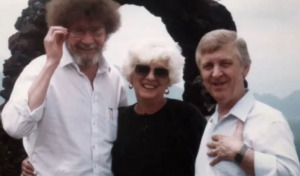 IMO, everything in Bob’s career life started going downhill the minute Walt and Annette Kowalski entered the picture. They saw Bob’s talent and seized upon it, seeing mutual opportunity for profit (for the Kowalskis) and emotional fulfillment (for Bob). Well, they weren’t wrong, but they got a little too into it.

I could go on about the love affair between Bob and Annette, but she seems like a genuinely terrible person, and I don’t want to give her any more exposure than I have to.

Sexcapades aside, it appears that Bob really was a pawn to be played however the Kowalskis wished. The documentary is interspersed with clips from The Joy of Painting, during which Bob says over and over again that the canvas is the one place in his life where he has total freedom, where he can do anything he wants.

Great metaphor about the liberation of creative expression? Hardly. He meant it — the Kowalskis dominated all of his career endeavors, even trying to get Bob to sign the rights of his name over to them on his deathbed. When he refused, the Kowalskis went into panic mode, and Annette blatantly stole the floral-painting techniques of Gary and Kathwren Jenkins to continue turning a profit, effectively running the two out of business.

On the whole, Bob’s life wasn’t as scandal-ridden as the documentary’s trailers and intro made it seem. But hey, that got me watching, and the real scandal — what happened to Bob Ross’s brand (and name) posthumously — is definitely interesting enough to stick around for, even though it only takes up the last half hour of the film.

What’s In A Name?

Bob Ross signed over the rights to his name to his half brother, Jimmie Cox (51%), and his son, Steve Ross (49%). When the Kowalskis sued for the rights to his name, Jimmie signed it over rather than trying to fight them, and the communist regime that ensued is nearly as interesting as my favorite cult documentaries.

HEY DONT BUY BOB ROSS PAINT PRODUCTS!
his family doesn’t own the name and the people who do (The Kowalskis) harassed Bob Ross on his deathbed to sign over his own name to them

Then wouldn’t let Ross’ own son use his name on paint products
They’re evil. Don’t feed your oppressors pic.twitter.com/psmVvHBqpu

The Kowalskis continued to try to expand the brand by certifying up-and-coming painters as a “Certified Ross Instructor.” Meh, that doesn’t seem gross on the surface — passionate painters can continue carrying his legacy. But the classes had a cult-like mentality of obedience, rules and control, even including a box where participants were encouraged to report anyone out of line. Shit really hit the fan when it was discovered that members of the company were signing Ross’s name on paintings in secret and then passing them off as real Bob Ross paintings.

Just watched the Bob Ross doc on Netflix. Only takeaway is the Kolowskis are absolute scumbags as well as Jimmie Cox for signing Bob’s name over. Well produced doc and very eye opening. pic.twitter.com/YD6Ky6hhDd

Steve Ross seemingly disappeared for a little bit, until he realized his father wouldn’t want him to be entrenched in the scandal over the right to his name (HIS OWN NAME) after his death. When he picks up a brush again and starts laying down some pinks and blues on a canvas, he instantly relaxes — it seems like he’s home.

The documentary ends with a few personal accounts of lives being saved by Bob’s comfort in The Joy of Painting. Steve reflected on his impact: “He was going to teach people that they were valuable. That they could be important in this world.”

I hope Bob’s influence and message of joy and happiness for all continues forever.

Thank you for not only being the original ASMR creator but for being such an incredible, genuine, and happy person. ❤️ pic.twitter.com/E2zAdMtHYH

Even in the midst of his last wishes being outright denied, of losing ownership to his name, I can’t help but think that Bob would have wanted to discard all that scandal as a minor inconvenience. His legacy lives on and continues to transform lives, even if only for a moment. Steve continues to teach painting, and the Kowalskis continue to profit millions via Bob Ross Inc. Maybe Bob would have called his decision to sign over the majority of his name to Jimmie a “happy little accident” — one to learn from, to paint over and move on, leaving room to create something more beautiful than before.

Have you ever watched The Joy of Painting? What are your thoughts on the Bob Ross documentary? Share with us below.