Revenge dressing sounds like a mean, slightly poisonous vinaigrette you pour over a salad for a foe. Not like poison poison, but maybe tainted with a little salmonella.

There is a reason the saying goes, “Revenge is a dish best served cold,” and a salad is not hot – you can see where I’m going with this, but it’s in the wrong direction.

Let’s get back on track: revenge dressing comes on the heels of a breakup. Hell hath no fury like a woman scorned, and is there a better way to show someone what they’re missing than to show up looking absolutely stunning? Not in our opinion. And if photographers just happen to capture your revenge ‘fit and plaster it everywhere, that’s a bonus.

Such is the case with the first woman recognized for a revenge dress: Princess Diana. Although we are sure she didn’t come up with the concept, she was the catalyst for the term and the ultimate example of revenge dressing. 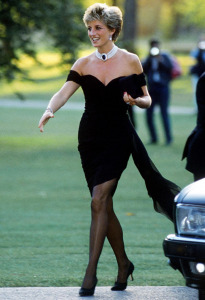 You’ve seen the LBD – for the uninitiated, that stands for little black dress – and Princess Di chose a stylish black, curve-hugging, off-the-shoulder dress by Greek designer Christina Stambolian to attend a party at the Serpentine Gallery in London.

“In November of 1994, Princess Diana was in the middle of a publicity storm following her separation from Prince Charles. Instead of going into hiding (which, let’s face it, would’ve been much easier), the royal made headlines for an entirely different reason — her dress,” says InStyle.

With that iconic moment, clothing became a weapon meant to exact vengeance on an enemy.

What Is Revenge Dressing?

Revenge dressing has captured the public psyche because of Princess Diana’s “revenge dress.” And for people adopting fashion, it offers a sly “fuck you” to social, political, and economic turmoil.

“I dress for revenge…” pic.twitter.com/VW8Zr0C1Un

RIP Princess Di, you would have loved Vigilante Shit pic.twitter.com/yXlvlcXpm9

Listen, any Swiftie will tell you that the singer knows a little something about revenge from her lyrics, so it’s extremely on brand for Taylor to be a revenge dresser.

Since the 1990s, people have been interested in revenge dressing because they have seen it achieved and are eager to attempt it themselves. But how does this translate into accessible pieces for people in the real world?

“On TikTok, there’s a few options: skin-tight casual dresses, glittery nightclub-ready frocks, opera gloves, leather trench coats, thigh-high boots, and open-back maxi dresses are all in the mix. It’s clear that revenge fashion is allowing people to reclaim negative experiences and giving the middle finger to the past,” explains Refinery29.

“All of the outfits in this collection are very revenge-worthy,” Bonollo says. “A revenge outfit, to me, really is something that makes you feel super powerful and confident on your own. The pieces all exude a sense of showstopping glamour: from a red leather corset, paired with pink trousers to an all-black mermaid gown with a chest cut-out.”

Bonollo drew on her personal life experiences for motivation as she designed the collection.

“Years and years ago, I had this one ex who absolutely hated it when I showed any sliver of skin, hated any time I would dress even remotely sexy, or when I felt confident either in myself or just my clothing,” Bonollo remembers. “So this collection is kind of the antithesis of that in both style and who the woman wearing those clothes is.”

The LBD worn by Princess Diana in 1994 is still a point of inspiration for those who design their own revenge dressing clothing today.

In the end, the most effective tactic for revenge dressing is to style it so you feel good. And if it happens to make an ex regret the end of the relationship, that’s just a bonus.

Tell us what you think about revenge dressing in the comments!

The 11 Best Stylish Brands To Buy If You’re Over 40 Keep Reading
The Best 8 Loungewear Items For Every Closet Keep Reading
Winter Layering Guide: How To Stay Warm But Not Overheat Keep Reading
10 Matching Sweatsuits & Lounge Suits To Keep You Cozy All Winter Keep Reading
Styling Flannels: Here Are Some Out Of The Box Ideas Keep Reading
Leave A Comment
Share
Join the Conversation
Cancel reply
shesafullonmonet_ Follow
View Open