Writer-director Ol Parker and fellow screenwriter Daniel Pipski set out to give us a traditional, good old fashioned, carefree romantic comedy that’s reminiscent of the 1990s with this month’s Ticket to Paradise. And I have to admit, mission mostly accomplished. The new romcom hits ALL of the tropes that became synonymous with the genre in the ‘90s – both in good and bad ways.

We have respected movie stars George Clooney and Julia Roberts reuniting as the leads of Ticket to Paradise, since Clooney’s Confessions of a Dangerous Mind (2002), Jodie Foster’s Money Monster (2016) and, of course, Steven Soderbergh’s Ocean’s Eleven trilogy (2001-04). Critics darling Kaitlyn Dever and social media fave Billie Lourd follow up Olivia Wilde’s Booksmart (2019) together again; and, like any good romcom should, we get a beautiful location for the story’s setting [in this case, Australia made up as Indonesia’s Bali].

David (Clooney) and Georgia (Roberts) only lasted five years of marriage right out of college, but during that short time, they managed to produce a daughter, Lily (Dever). Twenty-five years later, the divorced pair are forced to socialize at Lily’s law school graduation, and only two months after that, they get an email from the graduate revealing she’s already engaged to be married very soon to a local Bali seaweed farmer, Gede (Maxime Bouttier). Expected to participate in another family gathering, David and Georgia secretly plan to sabotage Lily’s wedding, feeling she’s about to make the same mistake they did.

The Cast Will Charm Audiences

Along for the ride is Lourd as Lily’s roommate and best friend, Wren, and Lucas Bravo as Georgia’s young, attractive boyfriend, Paul. Ticket to Paradise feeds into every nostalgia bait tactic that exists, while coming across like a modern mix of George Cukor’s The Philadelphia Story (1940) and Vincente Minnelli’s Father of the Bride (1950), as well as Charles Shyer’s 1990 remake of the latter. We get the good looking cast, stunning locales, the cheesy jokes [some of which don’t land], the token melodramatic moment and the typical enemies-to-lovers scenario between our stars. For the most part, a lot of these aspects worked for me, as someone who is a genuine, longtime romcom fan. 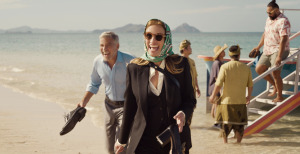 I like Clooney and Roberts both as a pair and on their own as actors, and I hope we get Dever and Lourd cast as friends in more future movies. The cast’s charms and chemistry almost make up for the barely decent script. But Park and Pipski also lean into some of the more dated gags from old romcoms that aren’t really necessary anymore; such as the familiar joke of a foreigner making a very long comment, and then the translation in English is interpreted as a couple words. For a romcom going for old school vibes too, it’s a little odd there’s little physical love shown in Ticket to Paradise with only a couple kissing scenes and one only played for laughs. Call me a sap, but I miss a nice, romantic love scene once in a while.

While I generally prefer Cooper Raiff’s Cha Cha Real Smooth of the few romcoms we’ve gotten this year, I hope the success of Ticket to Paradise helps continue the momentum for more modern romcoms. And no, unfortunately, Eddie Money’s ‘Two Tickets to Paradise’ doesn’t appear on the soundtrack.

Have you seen ‘Ticket to Paradise’ yet? Are you ready for romcoms to return? Tell us in the comments!