But while Prey is a prequel in the Predator universe, Aubrey herself also has a just as interesting and impressive movie out right now: John Patton Ford’s Emily the Criminal. The indie crime drama is also about predators, but in a completely different, realistic context, and certifies Plaza as one of the most intriguing actors working today.

Right off the bat, we know Emily Benetto (Plaza) isn’t exactly a great person. She has a past aggravated assault charge on her public record that, in return, is making it hard for her to get a nice paying job to end her student debt. She even snorts coke in a club bathroom while meeting up with an old high school friend, Liz (Megalyn Echikunwoke). When Emily’s co-worker at a food delivery service gives her an anonymous number to contact for easy money, she takes up the offer and finds herself involved with the seedy, underground crime scene of Los Angeles through credit card scams and theft.

Theo Rossi plays Emily’s criminal mentor and lover, while Gina Gershon appears as Liz’s boss. Like with Quinn Shepard’s recent movie, Not Okay, Emily the Criminal unapologetically focuses on a woman who knows what she’s doing and isn’t duped into her bad choices. A modern day anti-heroine, so to speak. Here, we are given Emily as both understandably frustrated but also on the edge of psychopathy. 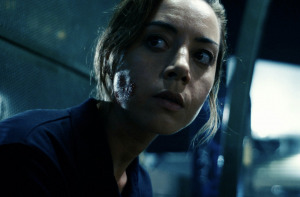 Plaza, who has come very far from playing comic relief in movies like Judd Apatow’s Funny People (2009), and her most famous role of April Ludgate on NBC’s “Parks and Recreation” (2009-2015), gives probably her best performance to date. Along with Matt Spicer’s Ingrid Goes West (2017) and Lawrence Michael Levine’s Black Bear (2020), Emily the Criminal shows Plaza is really in her element when she’s starring in a satirical or gritty indie flick.

Her portrayal and instinct help us believe Emily as a character, especially during a couple of moments that might have seemed a bit too convenient on the page. There are genuine moments of tension where we’re reminded just how much danger Emily has gotten herself into, with both Plaza’s acting and Ford’s writing and direction successfully reminding us crime is constantly living in fear. We really shouldn’t like or root for Emily, but it’s hard not to since the people she gets in trouble with are so much worse.

The only thing in Emily the Criminal I had trouble with was the relationship between Plaza’s Emily and Rossi’s Youcef in the second half of the movie. I didn’t buy that either of them would be interested in each other beyond a fling; and in real life, both would realize getting involved with a fellow criminal could be risky. But beyond that, Emily the Criminal has one of the best female performances and characters of 2022, so far, and is a solid feature film debut from Ford.

Are you a fan of Aubrey Plaza? Do you have any interest in ‘Emily the Criminal?’ Let us know in the comments!