Jordan Peele’s new sci-fi horror flick, Nope, is groundbreaking, and not for sci-fi or horror filmmaking – for horse movies. Like anyone who’s ever watched movies centered on the species, you think of racing pictures like Gary Ross’ Seabiscuit (2003) and Randall Wallace’s Secretariat (2010); or family tales like Carroll Ballard’s The Black Stallion (1979) and Caroline Thompson’s Black Beauty (1994).

But here with Nope, we have a brother-sister duo – played by Keke Palmer and Daniel Kaluuya – of professional horse trainers and loaners for rodeos and film/TV sets. Pretty unique set-up for a major studio release, which I’ll admit drew me to the new feature.

In the outer desert lands of Agua Dulce in LA County, Emerald (Palmer) and OJ Haywood (Kaluuya) take over the Haywood Hollywood horse ranch after their father, legendary trainer Otis Haywood, Sr. (Keith David), mysteriously dies while wrangling one of the horses. OJ doesn’t mind keeping things simple and lowkey with the ranch, while Em has bigger ideas of fame and fortune. After lending one of their best horses to a local rodeo themed carnival, the siblings’ other horses start running away or disappearing.

Steven Yeun co-stars as the carnival host and organizer who’s also a former child star, while Brandon Perea plays an electronics store employee who believes he knows why strange things keep happening. Nope is the third major motion picture from comedian-turned-filmmaker Peele following Get Out (2017) and Us (2019), and second co-starring Kaluuya. While Get Out was a smash hit that showed a ton of potential for Peele’s new career move, and Us was big with critics and audiences as well; the final act of the latter did make me concerned retrospectively. 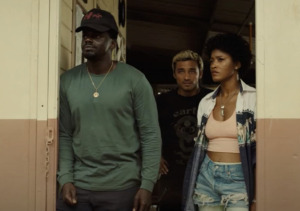 Us, along with Nope, make me slightly worried of how within enough time, Peele might gain the same reputation as another supernatural-horror writer-director: M. Night Shyamalan. Both started with impressive breakthroughs, and fortunately, Peele reels back and refrains himself from any M. Night-esque wacky plot twists with Nope that he almost hit with Us. But if I were the newer director, I might be a little cautious or aware of the possibility of becoming a parody of my own style.

Despite the originality of placing a diverse cast and aliens in a neo-western, I wasn’t completely in love with Nope as a whole, probably because simple alien abductions are a bit pedestrian these days. I will say though, I did enjoy that Peele and composer Michael Apels opted for a traditional, orchestral music score that’s both effective and fresh, rather than leaning into now-common digital heavy scores in these types of movies. Nope might seem a little basic to Peele fans who loved Get Out and Us, but it fits the bill for a nice popcorn flick over the weekend.

Do you like subversive horror movies? Does Jordan Peele’s ‘Nope’ look like a movie you’d enjoy? Tell us in the comments!