Anita Hill is a lawyer and educator who became a national figure in 1991 when she was called to testify at the confirmation hearing for U.S. Supreme Court nominee Clarence Thomas. Her testimony was particularly troubling and controversial because she was accusing Thomas of sexual harassment. Up until that point, Thomas was considered a slam-dunk nominee, but her testimony called into question his moral character.

Beyond inappropriate comments, she testified, “I began to be concerned that Clarence Thomas might take out his anger with me by degrading me or not giving me important assignments. I also thought that he might find an excuse for dismissing me.”

In her new book, Believing: Our Thirty-Year Journey to End Gender Violence, due out September 28th, Hill explores the origins of gender violence and the course it has taken over the years. She draws from her personal experiences in what has become a cross between a memoir, social analysis, and personal account to inspire a new awakening and reckoning for the assaults and abuses that have gone on too long. 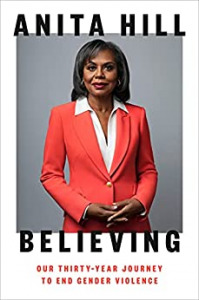 Since Hill’s first foray into the world of gender violence, silencing, and public humiliation in 1991, she’s been an advocate, scholar, and teacher. Everyone knows the part she played all those years ago. It’s not been so clear how she went on to learn from her experience. How did she transform that traumatic hearing incident into something more positive?

Instead of giving up, she used her knowledge and experience to search for solutions. She didn’t need validation, but she still demanded recognition. She wanted to shed light on the issues and prove that her experience and the reprehensible response were NOT isolated or rare incidents but widespread, cultural, and endemic.

If you’re at all puzzled as to why the US Supreme Court seems so hell-bent on undermining women’s rights, there are two people who might be able to shed some light on it for you. Their names are Anita Hill and Christine Blasey Ford. #Texas https://t.co/N9pVIJjYJ5

Hill wanted our leaders to take the situation seriously, to stand up and say: “I understand that this is a serious problem, that women are not safe in the workplace. They’re not safe in our schools. They’re not safe on our streets. And we are going to use the government resources to eliminate the problems.”

Hill already knows firsthand how gender violence affected her life, but she also draws on the life experiences of thousands of people who have shared their experiences with her over the years. In her book, she shows how patterns of behavior have affected every aspect of our lives, including not just our health, but also where we live, how safe we feel, and every other aspect of our very socially transparent and interwoven lives.

A post shared by We Do It Together (@wditogether)

I think we often like to think that we already have a solution, that it’s sitting like a Pandora’s box right in front of us. We might even think that if we just reach out and touch it, open it up, and embrace the chaos that we’ll never fear gender violence or inequity again. The truth is that it’s all such a bigger and more far-reaching problem.

Advocates like Hill have been working toward solving these problems for decades, and it still often feels like we’re putting a band aid on a gaping wound, just trying to stave off the worst of the hate, violence, and retribution that threatens to pour out and devour us all.

In an interview at Wellesley College in 2019, Hill said she wanted her superpower to be the ability to meet someone and know what has happened in their past. She explains, “It’s a curiosity in really getting into who they are and why they are the way they are, why they’re not able to experience equality and opportunity the way we want them to.”

What are your thoughts about Anita Hill’s new book? Are you planning to read it? Please share in the comments below!

For More In-Depth Articles On Social Issues, Read These:

The White House Is Bridging The Gender Pay Gap. Can The Rest Of The US Follow Suit?