Good morning! Nothing beats the smell of bacon and eggs cooking in the early morning. Actually, one thing does — no cooking in the morning! Mornings are busy and they can be stressful, so here are some make-ahead breakfast casseroles that you can just pop in the oven and serve to your entire family with no hassle.

Thanks to Taste of Home for this recipe! 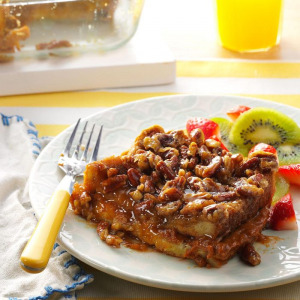 1. Preheat the oven to 325°F and place the Texas toast on an un-greased baking sheet. Bake for 15-20 minutes, or until the toast is light brown, then allow the toast to cool.

2. Arrange half of the toast in a single layer in the greased 8-inch square baking dish, trimming the toast to fit into the dish if necessary. In a small bowl, mix the cream cheese and the dulce de leche and spread it over the toast. Top with the remaining toast.

3. In another small bowl, whisk the eggs, milk, cream, sugar, and vanilla together. Pour the mixture over the toast, cover, and refrigerate overnight.

4. In the morning, preheat the oven to 350°F. Remove the French toast from the refrigerator while the oven heats up. In a small saucepan, combine the brown sugar, butter, and corn syrup or agave. Cook and stir over medium heat until the sugar has dissolved. Stir in the pecans and spread over the top.

5. Bake, uncovered for 40-50 minutes or until the casserole is puffed and golden and a knife comes out clean. Let it stand for 5-10 minutes before cutting.

Thanks to Southern Living for this recipe! 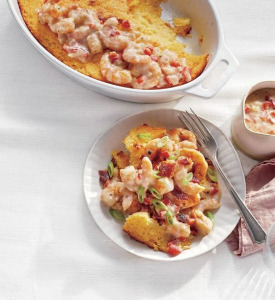 2. Bring the milk and 2 cups of heavy cream to a boil in a medium saucepan over medium-high heat. Stir in the grits and butter and let the mixture return to a boil, whisking often. Reduce the heat to medium and cook, whisking constantly until the grits are tender, about 5-7 minutes.

3. Remove the pan from the heat and stir in the egg, cheese, and 1 teaspoon of salt. Spoon the mixture into the prepared baking dish, cover, and bake until the mixture is set, 35-40 minutes.

4. While the dish is in the oven, cook the bacon in a large saucepan over medium-high heat, stirring occasionally until crisp, about 8 minutes.

5. Drain the bacon on paper towels, reserving 3 tablespoons of the drippings in the pan. Add the onion and bell pepper to the pan and cook over medium-high heat, stirring often until it has softened, about 3 minutes.

7. Spoon the shrimp mixture over the baked grits casserole using a slotted spoon. Sprinkle the top with scallions and cooked bacon. Finally, pour the shrimp gravy from the pan into a serving bowl to go with the casserole.

Thanks to Southern Living for this recipe! 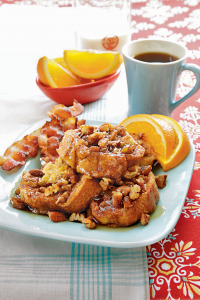 1. Grease a 6-quart slow cooker with 1 tablespoon of butter. Arrange the bread slices on the bottom of the slow cooker. Whisk together ¾ cups of sugar, 3 teaspoons of cinnamon, and the nutmeg. Whisk in the eggs, half-and-half, and vanilla. Pour the mixture over the bread, cover, and chill for 8-18 hours.

2. Whisk the remaining ¾ cups of sugar, 1 teaspoon of cinnamon, and flour in a bowl. Cut in the remaining 4 tablespoons of butter until the mixture is crumbly. Stir in the pecans, then cover and chill until ready to use.

3. Remove the bread mixture from the refrigerator and sprinkle the pecan mixture on top. Cover and cook on “High” for 1 hour. Reduce the heat to “Low,” cover, and cook for 3 + ½ hours, or until puffed and set.

Thanks to Allrecipes for this recipe! 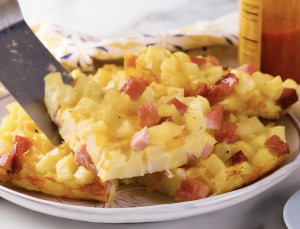 1. Preheat the oven to 350°F and grease an 8×11-inch casserole dish with cooking spray.

2. Mix the hash browns, eggs, ham, cheese, onion powder, salt, and pepper. Pour the mixture into the prepared dish. Shake the dish gently to level out the ingredients.

3. Bake, uncovered, in the preheated oven until the top starts to brown, about 40 minutes. Cool before you cut it into bars.

Thanks to Sally’s Baking Addiction for this recipe! 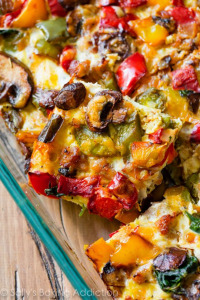 1. Set a large skillet over medium heat and coat it with nonstick spray or a drizzle of olive oil. Place the sausage in the skillet and begin to break it up with a spatula or a fork. Stir in the rosemary and brown the sausage for about 6-7 minutes.

2. Meanwhile, set a second skillet over medium heat and coat it with nonstick spray or a drizzle of olive oil. Add the peppers, mushrooms, spinach, onion, garlic, and sprinkle with salt and pepper. Begin stirring and cooking the vegetables until they’re tender, about 6-8 minutes.

3. Set the sausage and veggies aside.

4. Generously grease a 9×13 inch baking pan. Break the bread into pieces and place them into the pan in an even layer.

5. In a large bowl, whisk the eggs, milk, and ¼ cup of shredded cheese together. Pour half of this egg mixture over the bread. Top with the sausage and vegetables, then the remaining egg mixture and the last ¼ cup of cheese. Add a sprinkle of salt and pepper to the top.

6. Cover the casserole with plastic wrap or aluminum foil and refrigerate for 2 hours or overnight. Allow it to come to room temperature before baking.

Thanks to Carl’s Bad Cravings for this recipe! 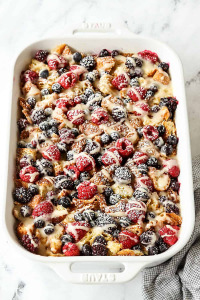 2. Add the cream cheese and sugar to a large mixing bowl and beat with a hand mixer until it’s smooth. Beat in the eggs until smooth, followed by the half-and-half, and finally the lemon juice, lemon zest, vanilla extract, and salt.

4. When the casserole is ready to bake, take it out of the refrigerator and let it sit on the counter while you preheat the oven to 350°F. Bake, covered with foil, for 30 minutes. Remove the foil and bake, uncovered, for an additional 15 minutes, or until a knife inserted in the center comes out clean.

5. While the breakfast casserole is baking, add all of the glaze ingredients to a medium mixing bowl and beat with a hand mixer until it’s smooth. Taste and add additional sugar for a sweeter flavor or lemon juice for a tangier flavor. Drizzle the glaze over the casserole.

Thanks to Scattered Thoughts of a Crafty Mom for this recipe! 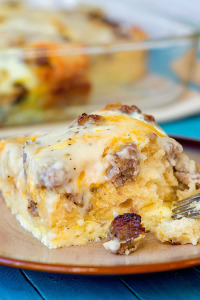 2. Brown the sausage in the skillet and drain thoroughly.

3. Cut the biscuit dough into 1” pieces and line the bottom of the pan.

4. Layer the cooked sausage over the biscuit piece, then layer the cheese over the sausage.

5. Whisk the eggs and milk together, then add the salt and pepper and pour over the biscuit laters.

6. Make the gravy according to the instructions and pour over everything.

7. Bake for 35-45 minutes, or until the eggs and biscuits are cooked through.

Okay, we’re ready for breakfast at your house after this! What make-ahead breakfast casserole are you most excited to try? Comment below!

For More Breakfast Recipes, Check Out These:

These Unusual Egg Hacks Will Become Your New Breakfast Obsession