The best way to make the most out of each season you’re in is to take advantage of the seasonal produce. Thankfully, we love food, so we’re eager to please on that front! One of my favorite dishes to make is a salad. It’s simple, it’s easy, it can be a side, or it can be the whole meal! Today, we’re highlighting our favorite fall salad recipes for you to enjoy all autumn long.

Thanks to two peas & their pod for this recipe! 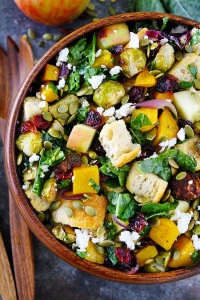 1. Preheat the oven to 375°F. Place the bread cubes on a large baking sheet and put them in the oven for 10 minutes, or until the bread is toasted. Remove the bread and set it aside.

2. Turn the oven to 400°F and place the butternut squash, brussels sprouts, and red onion on a large baking sheet. Drizzle with olive oil and toss until the vegetables are well coated. Season with salt and pepper to taste. Place the pan in the oven and roast for 30-40 minutes. Let it cool at room temperature.

3. While the vegetables are cooling, make the dressing. In a small bowl, whisk together the olive oil, lemon juice, apple cider vinegar, maple syrup, mustard, and garlic. Season with salt and pepper to taste.

Thanks to As Easy As Apple Pie for this recipe! 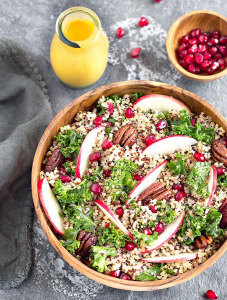 For the Apple Kale Quinoa Salad:

1. Rinse and drain the quinoa. In a small saucepan, combine the quinoa and water and bring it to a boil uncovered.

2. When it starts to boil, reduce the heat to the lowest setting, cover, and simmer for 20 minutes or until the water is absorbed and the quinoa is light and fluffy.

3. Remove the quinoa from the heat and let it cool to room temperature.

4. Put the chopped kale in a medium bowl with ½ tablespoon of extra virgin olive oil. Use your hands to massage the leaves until they soften and the color changes a bit.

5. Toss the pecans with maple syrup, cinnamon powder, and salt. Spread the nuts on a lined baking sheet in a single layer and bake at 400°F for 15 minutes or until lightly toasted and golden brown. Remove and set aside to cool.

6. Combine all the dressing ingredients in a blender and blend until smooth. Taste and adjust salt and pepper to your liking.

7. In a large bowl, combine the cooled quinoa, kale, and apples. Gently toss to combine.

8. Top the salad with pecans and pomegranate arils and drizzle with pumpkin turmeric dressing.

Thanks to Pinch of Yum for this recipe! 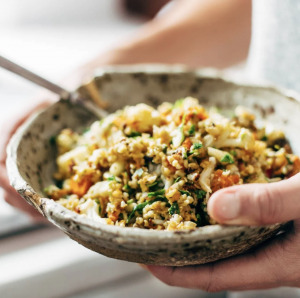 1. Rinse the grains and place them in the rice cooker with the appropriate amount of broth water (refer to the package). Set on the white rice setting.

2. Preheat the oven to 425°F. Chop the cauliflower into small florets, peel and chop the sweet potatoes, then place them on the baking sheet and drizzle with oil. Sprinkle with salt and pepper and add a few sprigs of thyme and other dried spices if you have some that you like. Roast for 20 minutes, stir, and roast for another 10-15 minutes. When the sweet potatoes are golden brown and soft, remove them from the oven and set them aside.

3. While the veggies are roasting, combine all the dressing ingredients in a jar with a tight lid and shake to combine. Chop the apple and set it aside.

4. When the grains and vegetables are done, toss everything together. 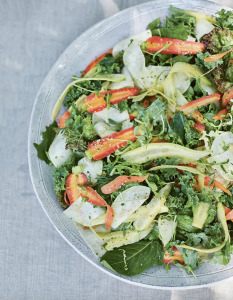 1. Put the ginger, scallions, garlic, benne seeds, vinegar, soy sauce, and honey in a blender and purée until smooth. Run the blender on low speed and slowly add the grapeseed oil.

2. Wash and dry the kale, dandelion greens, and lettuce. Transfer the greens into a serving bowl. Top with carrots, kohlrabi, and brussels sprouts. Sprinkle the salt over the salad and toss the benne seed dressing in the bowl.

Thanks to Love & Lemons for this recipe! 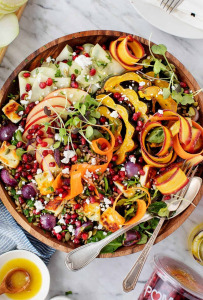 1. Preheat the oven to 425°F and line 2 baking sheets with parchment paper. Place the squash and onions on one sheet and the halloumi on the other. Drizzle the squash, onions, and halloumi with salt and pepper. Roast for 20-30 minutes, or until the squash is tender, the onions are soft, and the halloumi is golden brown around the edges.

2. In a small bowl, whisk together the olive oil, vinegar, garlic, mustard, maple syrup, salt, and pepper to taste. Set it aside.

3. In a small bowl, toss the kohlrabi with a drizzle of the dressing and toss to coat. In a medium bowl, combine the farro, herbs, and about ¼ of the dressing.

4. Assemble the salad on a large platter with the farro, mixed greens, squash, onions, halloumi, kohlrabi, carrots, apple, and walnuts or pepitas. Drizzle with the remaining dressing and sprinkle the pomegranate arils and feta cheese on top. Season to taste. Top with microgreens.

Thanks to Joyful Healthy Eats for this recipe! 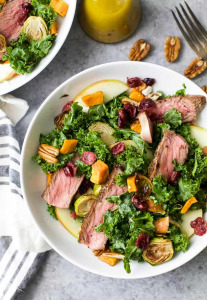 For the Apple Vinaigrette:

1. Preheat the oven to 400°F. Add brussels sprouts and sweet potatoes to a baking sheet. Drizzle with 1 tablespoon of olive oil and season with salt and pepper. Toss to coat all the veggies. Bake the vegetables for 20 minutes.

2. As the veggies are baking, add the torn pieces of kale to a large bowl. Add a pinch of salt and massage the kale leaves for 2-3 minutes. Set aside.

3. Generously season both sides of the ribeye with salt and pepper.

4. Heat a large skillet to medium-high heat. Add grapeseed oil to a skillet, then the ribeye. Sear each side for 4-5 minutes, remove from the heat and let it sit for 2-3 minutes, then thinly slice it.

5. Add garlic, Dijon mustard, maple syrup, apple cider vinegar, red pepper flakes, and salt and pepper to a small bowl. Whisk them together, then slowly pour the olive oil into the mixture, whisking the entire time until the dressing is blended.

Thanks to Julia’s Album for this recipe! 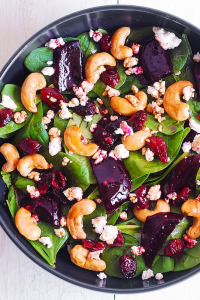 For the Honey-Lemon Salad Dressing:

1. Cook the beets by boiling them in water for 20-30 minutes. Let them cool, then peel and slice them.

3. In a separate small bowl, combine the salad dressing ingredients and whisk until combined.

Who says fall salads should be boring? How are you celebrating the autumn harvest through food? Comment below!

For More Fall Recipes, Read These:

These 9 Pumpkin Recipes Are Perfect For The Start Of Fall