One of the worst lies ever told is that the American capitalist complex is a meritocracy.

It’s so ingrained in our culture that it permeates everything: Someone in a low-paying job needs to ‘work harder’ to get a new, better-paying job.

People without housing or vehicles to transport themselves to or from work, often blamed and shamed for their current situation, are given vague advice about how to improve their lives.

Rachel Rodgers recently spoke to the New York Times about this phenomenon, especially as it pertains to women. Rodgers, who is the author of We Should All Be Millionaires: A Woman’s Guide to Earning More, Building Wealth, and Gaining Economic Power, outlined the roadblocks to wealth that disproportionately affect women (particularly women of color).

If you’re not surrounded by a personal network of people who are either cheering for you or mentoring you, it’s very, very difficult to get ahead.

Years ago, I read an article about the founders of the beauty company Birchbox.

The enterprising founders highlighted how they asked the alumni at their Ivy League school to help with a proof of concept and early funding.

While the founders made an extremely lucrative business decision that should be applauded, how is that replicable for people without an inside track to an upper-echelon brain trust? 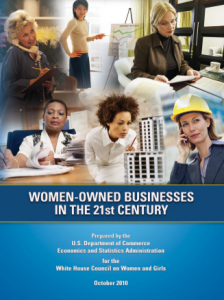 Support and mentor women who need the network and connections that help propel their male counterparts to success.

This could include helping connect a friend to a new client, telling a colleague about a new opportunity, or recommending women-owned businesses to your own personal network.

When women win, we all win.

Did you know there were so few women millionaires? Sound off in the comments!

For More On Women’s Issues, Check Out These Articles:

The White House Is Bridging The Gender Pay Gap. Can The Rest Of The US Follow Suit?

The “Nagging” Stereotype Causes Emotional Inequality, And It’s Time We End It

Easy Ways To Donate: Shop With These Companies That Give Back Keep Reading
The Reckoning For Racism in Healthcare Is Here: Is There Hope? Keep Reading
Anita Hill Advocates For An End To Gender Violence In Her Book, ‘Believing’ Keep Reading
Teaching Your Children About Consent? Here’s What To Know Keep Reading
What Does Gov. Cuomo’s Resignation Mean For Sexual Harassment Victims? Keep Reading
Leave A Comment
Share
Join the Conversation
Cancel reply
shesafullonmonet_ Follow
View Open