Maine passed the “Right to Food Act” on November 3, a Constitutional amendment allowing individuals to “have a natural, inherent and unalienable right to grow, raise, harvest, produce and consume the food of their own choosing for their own nourishment, sustenance, bodily health and well-being.”

It’s the first state in the US to take such a stance. Supporters advocated that it would allow smaller farmers to have ownership of their food supply, rather than handing over their freedoms to corporations. Those against the resolution included animal rights activists, who believed that the “vague” act would threaten animal welfare.

But, ultimately, Maine stood by its food sovereignty promise, with sixty percent of voters checking the “yes” box on the “Right to Food” act. A slimmer margin than expected? Perhaps.

Is it the start of a movement? Maine’s lawmakers hope so — but food sovereignty has been a hot-button issue for years.

What Is Food Sovereignty?

Food sovereignty is a movement that promotes the ability for food producers to reconnect with their land and harvest their own sustenance in sustainable ways. It doesn’t mean skirting the rules or breaking laws — it simply means giving small food producers the means to grow their own food, and to provide to those who want to eat it.

The term was first coined in 1996 at the World Food Summit by La Via Campesina, the International Peasants’ Movement. Their Tlaxcala Declaration stated that “We are united in our rejection of the economic and political conditions which destroy our livelihoods, our communities, our cultures and our natural environment. We are determined to create a rural economy which is based on respect for ourselves and the earth, on food sovereignty, and on fair trade.”

The organization even created a list of objectives, and strategies to achieve them, including “Develop[ing] appropriate regional responses to bilateral and regional trade agreements such as MERCOSUR, NAFTA, APEC, etc.” and “Promot[ing] initiatives which will contribute to the development of fair trade with direct participation of producers and consumers, beginning with an international anti-dumping campaign.” 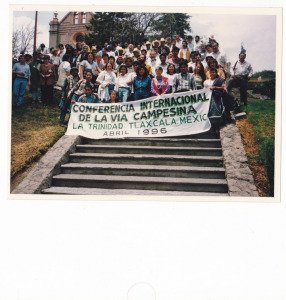 Their Bangalore Declaration in 2000 emphasized their dedication to the movement. “The Via Campesina is committed to achieving food sovereignty and will engage in a worldwide campaign against low priced food imports,” they wrote. “We, the peasant and small-scale farming societies are not defeated. We are strong and determined and we are the majority in the world. We are proud of our work, which is to produce safe foods for our families and humankind.

“We cherish our diversity, both biological and cultural. The future belongs to us.” 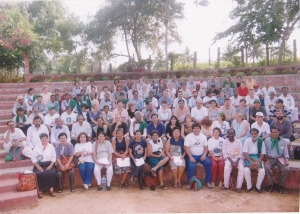 It took another nine years until Maine enacted its Food Sovereignty law, the first of its kind in the nation. A long time coming? Absolutely. And a huge step in the right direction — but only one step, one state, with 49 still undecided on where they stand in the movement.

Food Deserts and the Hope of Food Sovereignty

In 2020, the Yurok Tribe in California started the Yurok Agricultural Corporation (YAC). The goal: to move toward food sovereignty and escape food deserts, a common issue on Native Reservations. 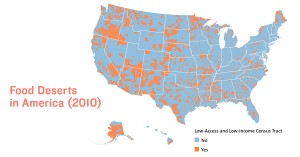 Native Reservations fall into this category; the Yurok Reservation only has two mini marts with limited stock. It’s common among Native Reservations, and tribes are beginning to rely on the hope of food sovereignty to provide them with the resources they need.

Toby Vanlandingham, president of the YAC, explains that “Food sovereignty to me is the people’s right to define their own healthy and culturally relevant food system that utilizes ecologically and sustainable methods for growing and harvesting.”

The Annie E. Casey Foundation has recommendations for fixing this problem: “Incentivizing grocery stores and supermarkets in underserved areas; Funding city-wide programs to encourage healthier eating; Extending support for small, corner-type stores and neighborhood-based farmers markets; Partnering with the community when selecting food desert measurements, policies, and interventions; [and] [e]xpanding pilot efforts allowing customers to use Supplemental Nutrition Assistance Program benefits to purchase groceries online.” (This article was posted in February 2021; as of August 2021, 48 states allow shopping online through the pilot programs, though the stores are limited.)

It hardly sounds revolutionary — why should sustainable methods be shunned and banned? Especially in areas which need it, such as food deserts?

Maine answered that question: they shouldn’t be.

The Future of Food Sovereignty in the US

Democratic State Sen. of Maine, Craig Hickman, is baffled by those who oppose the amendment, saying “It’s always a good idea to secure and protect an individual right in the world we live in. Food is life…. I don’t understand why anyone would be afraid of saying so out loud in the constitution.”

The youth are also getting involved. Young advocates for food sovereignty are a part of La Via Campesina, and in 2017, they wrote during La Via Campesina VII International Conference: “… [W]e reject claims that free trade increases the welfare of our society. We demand that agriculture be excluded from trade agreements and that the voice of young peasants is recognised in all related decision-making processes.”

It’s a strong statement from farmers, agricultural workers, Natives, and peasants: we are strong, and we will not back down until the food sovereignty movement is the norm. And with Maine’s House supporting this bipartisan movement, it’s likely that other states will soon follow suit — providing a bright future for those advocating for the past 25 years.

Are you a part of the food sovereignty movement? How are you working to eradicate anti-peasant laws? Share with us in the comments.

For More Articles On Social Issues, Read These:

Anita Hill Advocates For An End To Gender Violence In Her Book, ‘Believing’

These Inspirational Miss USA Contestants Spotlighted The Need For Diversity Keep Reading
Liberty University Has Silenced Its Accusers. Now They’re Speaking Out. Keep Reading
Facebook Is Rebranding – What Does It Mean For Users And Their Future? Keep Reading
Ann Coulter’s “Personal Fantasy” Is Denying Women The Right To Vote Keep Reading
Want To Know More About Day Of The Dead? This Is What The Cultural Celebration Actually Means Keep Reading
Leave A Comment
Share
Join the Conversation
Cancel reply
shesafullonmonet_ Follow
View Open