What can I say about Ann Coulter?

Nothing nice, so I’ll let her speak for herself.

She doesn’t think women should have the right to vote. 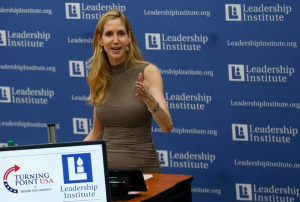 The conservative pundit spoke to Missouri State University conservatives, urging them to focus on the issues of “crime, immigration, and wokeness” to win elections.

Oh, and women should be denied their constitutional right to vote because… “Women see the government as their husbands.”

Now, Ann Coulter is a lot of things, but she’s certainly not dumb.

By saying women shouldn’t have the right to vote, she’s including herself. 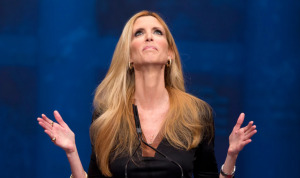 And I can’t reconcile how such a — let’s be generous and call her passionate — Republican woman would be okay with not being able to cast a ballot.

Why She Said It

Coulter was invited to speak by the MSU chapter of Turning Point USA, a “nationwide college campus conservative advocacy group.”

The conservative event was also organized by the Leadership Institute, which, according to their website, “Identifies, trains, recruits and places conservatives in politics, government, and media.”

During a Q&A, a student-submitted question Coulter was asked circled back to Coulter’s long-held belief that women should not have the right to vote. “If we took away women’s right to vote, we’d never have to worry about another Democrat president. It’s kind of a pipe dream, it’s a personal fantasy of mine,” she said in a 2007 New York Observer interview.

When asked about this asinine statement at the event, Coulter stuck to her guns.

“Yeah, I’d give up my vote in a heartbeat as long as the rest of you stop voting…” she said.

“Women see the government as their husbands. I mean, when you look at the Democrats getting in there and spending $4 trillion…wherever women are given the vote in whatever state, in whatever country you see spending going through the roof.”

Does She Mean It?

Odds are pretty good that Coulter would have a massive shitfit if SHE or other conservative women couldn’t vote.

In my opinion, she only wants Democrat women (and probably men) to lose their voting rights.

Coulter has a history of saying the most outrageously offensive things to get attention — and it works.

Case in point, I’m writing about her. Does she truly believe that women should not vote?

But odds are pretty good she wouldn’t or her money where her huge mouth is if it came down to it.

Votes for me, but not for thee — if thee means female Democrats.

Do you find Ann Coulter’s women’s vote stance as offensive as we do? Sound off in the comments!

Want To Know More About Day Of The Dead? This Is What The Cultural Celebration Actually Means

These Inspirational Miss USA Contestants Spotlighted The Need For Diversity Keep Reading
Liberty University Has Silenced Its Accusers. Now They’re Speaking Out. Keep Reading
Maine’s New “Right To Food” Act Is Changing The Game Of Food Sovereignty Keep Reading
Facebook Is Rebranding – What Does It Mean For Users And Their Future? Keep Reading
Want To Know More About Day Of The Dead? This Is What The Cultural Celebration Actually Means Keep Reading
Leave A Comment
Share
Join the Conversation
Cancel reply
shesafullonmonet_ Follow
View Open