A new Miss USA 2021 was crowned this week at the River Spirit Casino Resort in Tulsa, Oklahoma.

And the winner is?

Smith is a reporter for WHAS-TV, the ABC affiliate in Louisville.

She is a graduate of the University of Kentucky and holds a bachelor’s degree in broadcast journalism and a minor in political science.

With the Miss USA crown atop her head, Smith will now compete in the 2021 Miss Universe pageant on Dec. 12 in Eilat, Israel.

Smith is the third Black woman in a row to win the title of Miss USA.

Competing alongside her was the first openly transgender woman, the first Afghan woman to represent Connecticut, and an Air Force veteran who spoke openly about struggling with PTSD (Post-Traumatic Stress Disorder).

Miss USA began in 1952 and is an American beauty pageant that’s held annually.

The contest selects the entrant from the USA in the Miss Universe pageant, says Wikipedia.

“The Miss USA pageant began in 1950 when Yolande Betbeze, winner of the Miss America pageant, refused to pose for publicity pictures while wearing a swimsuit. 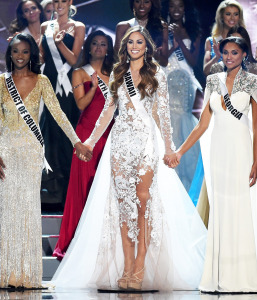 “Pageant sponsor Catalina decided to pull their sponsorship of the pageant and create their own competition.”

The winner is assigned a one-year contract with the Miss Universe Organization, and travels across the USA to speak about their chosen causes.

Aside from the title, the winner receives a cash allowance for her year-long reign, a modelling portfolio, beauty products, clothes, and shoes.

They also receive styling, healthcare, and fitness services by different sponsors of the pageant.

“The winner gains exclusive access to events such as fashion shows and opening galas, as well as access to casting calls and modeling opportunities throughout New York City.”

Past Lack Of Diversity

Past pageants have struggled to catch up with the times, often showcasing a lack of diversity among the contestants. 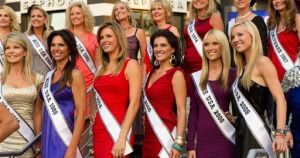 Miss USA traditionally has been a parade of thin, predominantly white, able-bodied women.

The reason 2021’s contest is so refreshing is the celebration of diversity among its contestants.

Kataluna Enriquez, 27, the Miss Nevada USA winner, is the first openly transgender woman to compete in the Miss USA pageant.

Enriquez, a Filipina American and designer of her own pageant clothing, was eliminated before round 16. But she is sparking hope that pageants are becoming more inclusive.

In March, after winning a preliminary pageant in Nevada, she spoke about being trans.

“Today I am a proud transgender woman of color. Personally, I’ve learned that my differences do not make me less than, it makes me more than,” she said, the Las Vegas Review-Journal reported.

“I know that my uniqueness will take me to all my destinations, and whatever I need to go through in life.”

Amanda Torchia, 25, is the first Afghan woman to represent Connecticut in the pageant.

Proud of her Middle Eastern heritage, she often talks about her upbringing.

On her IG page, she wrote “In less than a week, a daughter of immigrants will get to live her #AmericanDream and be on the MISS USA stage🙏 🇺🇸.

“When my parents came to this country, they sacrificed everything. They have taught me that where you come from does not determine where you are going. YOU determine that. Thank you for everything mom and dad, we did it 🙏❤️.”

“Being a veteran, I was unfortunately diagnosed with PTSD, and that’s something I want to look more into.

“I want to continue to advocate for my fellow veterans who have PTSD. I’m one of the lucky ones. I’m trying to put my foot down and overcome it, and I know some people aren’t as lucky as I am,” she added.

Do you think the diversity in this year’s Miss USA pageant is a sign of things to come? Tell us in the comments!

For More Spotlight And Current Events, Check Out These Articles:

Black Santas Will Be At Disney For The First Time This Year Keep Reading
Roe v Wade – What You Should Know About the Landmark Abortion Legislation Keep Reading
Liberty University Has Silenced Its Accusers. Now They’re Speaking Out. Keep Reading
Maine’s New “Right To Food” Act Is Changing The Game Of Food Sovereignty Keep Reading
Facebook Is Rebranding – What Does It Mean For Users And Their Future? Keep Reading
Leave A Comment
Share
Join the Conversation
Cancel reply
shesafullonmonet_ Follow
View Open