Britney Spears has called today her “best day ever.”

That’s because after 13 long years, she is finally free.

The embattled pop star and icon regained her much-deserved freedom over her life and finances on Friday.

A Los Angeles judge ended the conservatorship that had restricted her for over a decade. 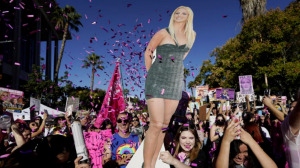 “Effective today, the conservatorship of the person and the estate of Britney Jean Spears is hereby terminated,” Judge Brenda Penny said after a 30-minute hearing in which no one opposed ending the court-sanctioned arrangement.

The 39-year-old Toxic singer had begged the court to end the conservatorship that has ruled her personal life and $60 million estate since 2008.

Although Spears didn’t attend Friday’s hearing, she took to her IG to post, “I love my fans so much it’s crazy!!! I think I’m gonna cry the rest of the day !!!! Best day ever.”

The mood among Britney’s base was celebratory when the decision came down — fans waving signs of support exploded into cheers.

Some broke out into song — Stronger, of course — and danced, popping pink confetti cannons into the air.

“It was a monumental day for Britney Spears,” the pop star’s attorney, Mathew Rosengart, said outside the courthouse.

He thanked supporters in the #FreeBritney movement who he said “had been essential to ending the legal arrangement.”

The conservatorship was set in place after Spears had a mental health crisis in 2007 and was overseen by her father Jamie.

Britney was trending at number one on Twitter, and support and congratulations poured in by fans and other celebs.

Donatella Versace wrote on IG, “Freedom is a human right. My heart is smiling for you, Britney. Congratulations on your regained and deserved emancipation. I love you, your fierce fans love you and the world NEEDS your brilliance. Happy Britneypendence day! #FreeBritney.”

🎉 I will see you all at @DOCNYCfest tonight. However, today is also a day to celebrate the liberation of Britney Spears. 🎉

And last, but certainly not least, Sam Asghari, Britney’s fiancé, wrote on his  IG “History was made today. Britney is Free!”

How The Conservatorship Came To Be

Although it seemed to the public that Britney did need help during her mental health crisis, as the years went on, people began to question why she still had zero control over her life.

When I say zero, I mean none. The court arrangement was set so she could not do even basic things, such as going to her beloved Starbucks to get a Frappuccino without the OK of someone else.

A BODYGUARD walking up to pay for Britney Spears’ Starbucks order with her own credit card when Britney is right there. Every human has a right to pay for themselves. Britney is capable to do that. #FreeBritney pic.twitter.com/F79HqWHK6B

Seems fishy, right? It gets smellier as the years go on and dedicated fans begin to delve into the issue.

People were questioning why she wasn’t deemed fit to make even the simplest decisions for herself but she WAS deemed fit to perform concerts, hold down a grueling Las Vegas residency and earn hundreds of millions of dollars — money she made but couldn’t spend.

The questions kept coming, culminating in the #FreeBritney movement.

Toxic: The Podcast started during the movement and is “dedicated to investigating Britney Spears’ conservatorship and the court system that’s allowed it to persist.”

Hosted by comedians and Britney devotees Tess Barker and Barbara Gray, the podcast delves into every aspect of the case and is credited with bringing awareness to the unjust conditions Britney has suffered while under her father and the court’s control.

A conservatorship is put in place by a court for persons who are unable to make their own decisions — such as the elderly or people suffering with dementia or severe mental illness.

“Spears’ conservatorship is split into two parts — one is for her estate and financial affairs, the other is for her as a person. Under this legal agreement, Spears has not controlled her finances since 2008.”

At first, her father was in charge of both parts of the conservatorship, but stepped down as her personal conservator in 2019 after suffering serious health issues.

Jodi Montgomery, a care professional, replaced him on an interim basis but Britney asked for this to be made permanent so her father could not resume control over her as a person.

According to The New York Times, Britney “quietly pushed for years to end her conservatorship.”

I always knew the conservatorship was bad, but today Britney herself got to testify how bad its truly been, with her own words. She is essentially being trafficked by her own family and team. This cannot continue ANY LONGER #FREEBRITNEY !!!

This summer, Ms. Britney Jean herself spoke virtually at a court hearing regarding the removal of her father as conservator of her estate.

Her July 14 testimony was heartbreaking — at one point during the hearing, Spears said she felt that those in the conservatorship “were trying to kill me.”

“If this is not abuse, I don’t know what is,” she said. Spears called her conservatorship “f–king cruelty.” Spears told the court she was not willing to be evaluated to remove her father from the conservatorship, saying she has “serious abandonment issues.”

“I just want my life back,” Britney Spears told the judge who is handling her guardianship case during passionate testimony. “I really think this guardianship is abusive.”

She also made it clear she wants her father charged with conservatorship abuse.

Britney’s mother, Lynne Spears, said in a court filing that Britney has been “able to care for herself” for years, and asked the court to “listen to the wishes of her daughter” and grant Britney permission to hire her own counsel.

“Now, and for the past many years, [Britney Spears] is able to care for her person and in fact has, inside of the parameters of this conservatorship, earned literally hundreds of millions of dollars as an international celebrity,” the petition read. “Her capacity is certainly different today than it was in 2008.” Lynne’s attorneys also listed more of Britney’s wishes that she wanted to see granted: removing Jamie as a conservator, ending the conservatorship all together without her “having to endure another evaluation,” allowing her “to ride in her boyfriend’s car,” giving her control to “own her own money,” and allowing her to “have her IUD removed.”

The day after Britney’s testimony, the judge granted her request to hire her own attorney to represent the singer in the fight for her freedom.

Spears chose to retain former federal prosecutor Mathew Rosengart, a veteran entertainment litigator, to represent her in the fight for her life.

Even though Jamie Spears, who is seen by fans and the general public as the villain in this story, stepped down, his comments through his lawyer seemed to indicate that he wasn’t finished trying to control his daughter’s life.

“There are, in fact, no actual grounds for suspending or removing Mr. Spears as the Conservator of the Estate … and it is highly debatable whether a change in conservator at this time would be in Ms. Spears’ best interests.”

🚨 Jamie Spears DENIED Britney’s petition for suspension and removal of him as conservator of the estate. Don’t let the media trick you into believing Jamie has stepped down, JAMIE HASN’T STEPPED DOWN! #FreeBritney pic.twitter.com/5YVGkWv9Ll

Huh? Then why even step down??

Jamie’s rep added, “Nevertheless, even as Mr. Spears is the unremitting target of unjustified attacks, he does not believe that a public battle with his daughter over his continuing service as her conservator would be in her best interests.

“So, even though he must contest this unjustified Petition for his removal, Mr. Spears intends to work with the Court and his daughter’s new attorney to prepare for an orderly transition to a new conservator.”

So he contested Britney’s petition for his removal but removed himself?

Hmmm, are we sure about that, Mr. Spears?

So team con went from “there’s no abuse happening to britney spears, everything is fine and she wants this!” to “it wasn’t jamie spears who had anything to do with any medical abuse, that was all everyone else but her poor loving father!” Hilarious.

Rosengart told TMZ, “We are pleased but not necessarily surprised that Mr. Spears and his lawyer finally recognize that he must be removed. We are disappointed, however, by their ongoing shameful and reprehensible attacks on Ms. Spears and others.

“We look forward to continuing our vigorous investigation into the conduct of Mr. Spears, and others, over the past 13 years, while he reaped millions of dollars from his daughter’s estate, and I look forward to taking Mr. Spears’s sworn deposition in the near future. In the interim, rather than making false accusations and taking cheap shots at his own daughter, Mr. Spears should step aside immediately.”

“In the interim, rather than making false accusations and taking cheap shots at his own daughter, Mr. Spears should step aside immediately” #FreeBritney pic.twitter.com/8YBkzkjz0R

He didn’t throw shade, he threw one of those humongous golf umbrellas at Jamie, and we love to see it.

At long last, Britney is free. Free to live her life as she wants, free to make her own decisions, free to do whatever she fucking wants.

And put that shit on repeat.

How do you feel about Britney being freed? Let us know in the comments below!

For More Celeb News, Read These:

Emily Hampshire Was Called Out By Fans On Her Latest Instagram Post, And Her Response Was Pretty Perfect