Britney Spears spoke for 24 minutes about desiring an end to her conservatorship – controlled by her father, Jamie Spears – on June 23rd.

It was a heartbreaking testimony. She discussed how she hasn’t “been back to court in a long time, because [she didn’t] think [she] was heard on any level.” She explained how she was forced to have an IUD she didn’t want, couldn’t be driven by her boyfriend, and had been drugged with Lithium for many years of the conservatorship. This powerful speech seemed like a guaranteed win for Spears, a way out of an arguably abusive relationship that’s been controlling her for 13 years.

The judge came back and denied her request, concluding that her father would remain the sole conservator.

Britney fans, fans who had spearheaded the movement #FreeBritney, fans who had taken to the streets with banners and signs protesting the conservatorship, were heartbroken. How could a 39-year-old woman be under someone’s thumb for 13 years?

#FreeBritneyNOW #FreeBritney If Judge Brenda Penny wasn’t corrupt, she would not be YEARS deep in Britney Spears’ conservatorship case making Britney feel like this: pic.twitter.com/T6X0IMnuIc

Well, a few reasons. And we can start with a tale as old as time: women do not have autonomy.

Britney Spears was 26. She had been struggling for a while: she was seen driving with her first son in her lap; she gave birth to her second son and filed for divorce from her ex-husband, Kevin Federline, within two months; her aunt, whom she had been extremely close with, passed from ovarian cancer in January of 2007; she had to stay in a drug facility for a night. It was a lot for one person to handle, on top of a burgeoning acting career and iconic music career. And remember: Spears was only 26.

So, the night after her first overnight rehab stay, she grabbed a pair of electric clippers and shaved her head. She then entered other treatment facilities. She attacked a paparazzo’s car with an umbrella. Federline received primary custody of their sons.

Incredibly fucked up that Britney Spears got semi-cancelled just for having (an entirely justified) public freakout. She shaved her head during a time when mental health was completely ignored as an issue in the majority of society, and somehow that deserved ostracism.

The media went wild. Every major outlet posted about her breakdown, about how she was a mess of a popstar. None of it came from a place of worry, of course. Rather, it was their epitome of “just like a car crash, you can’t look away.”

In October 2007, she released her album, Blackout. It was meant to be her bounce back from the past year’s turmoil. With black hair rather than her signature blonde, it was a rebirth of sorts. It appeared that she was back on track, that she was in a better place. Spears was back to being a star.

But, in 2008, things went awry once again. Spears, who was spending time with her sons, refused to give them back to Federline. When police arrived, they noted that she appeared to be under the influence of an unidentified substance, leading to immediate hospitalization. Her visitation rights were terminated the next day, with Federline receiving sole physical and legal custody. She was then placed under a 5150 involuntary psychiatric hold, which led to the conservatorship she is under today, in which her father controls all of her assets.

Here’s the thing: A conservatorship may not have been the right answer, but Spears was struggling and needed support. And, may I point out again: Spears. Was. Only. 26. At 26, I was reliant on the adults in my life, because I was struggling, too. In some sectors of my life, I was not capable of making healthy, logical choices. While I was not under a conservatorship by any means, I can acknowledge how crucial it was for me to not have control of specific aspects of my life, as frustrating as it was at the time.

Following the implementation of the conservatorship, she released multiple albums, went on high-grossing tours, held a spot on the judges’ panel for the US’ The X-Factor, and held a residency in Vegas. Things appeared to be looking up, and it seemed realistic for the conservatorship to end. Her father would no longer need to manage her assets. 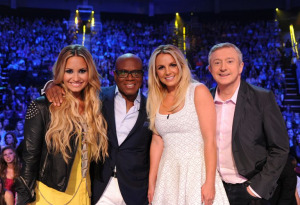 In 2019, the #FreeBritney movement began, sparked by an anonymous tip regarding the conservatorship and her father’s control over not just her assets, but Spears herself. 2020’s Framing Britney Spears documented the abusive nature of the media and the conservatorship, bringing global awareness to the struggles Spears has endured.

Louis Walsh said Britney Spears was pumped full of medication and drugs through her time on X Factor. #freebritney pic.twitter.com/TWuh2bI3bj

Britney Spears had landed a $15 million dollar deal to be a judge on X Factor & yet couldn’t afford to pay her half of dinner! She currently gets a $2000 weekly allowance. She’s the one BUSTING HER ASS for her money & can’t have full access to it?! SERIOUSLY?! #FreeBritney pic.twitter.com/4al3HkFOf8

And that leads us to now, 13 years later, where the judge has denied ending the conservatorship and her father Jamie remains the sole conservator.

My main question, after all of this, is: how can you want to hold this much control over someone? But my follow-up question is pointed: why is it that women are controlled, while men roam free following outbursts?

The Patriarchy Of Conservatorships

Wow – Britney’s ‘conservatorship’ is patriarchal bs. I could never imagine this happening to a male star. #FreeBritney #FramingBritneySpears

Kanye West had what some would call a “breakdown.” He called slavery a choice. He converted to born-again Christianity in 2019, causing problems and parenting differences with ex-wife Kim Kardashian. He ran for President, managing to land on ballots in certain states and actually receiving votes. He spoke openly about how he and Kardashian thought about aborting their first daughter. He went on Twitter rants, attacking other celebrities and family members (refer to his calling Kris Jenner, his former mother-in-law, Kris Jong Un, and accusing her and Kardashian of white supremacy.) He was also very open about being off his medication for bipolar disorder during this time. 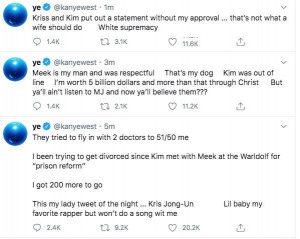 It would have been the perfect time to 5150 someone, and then establish a conservatorship. Instead, people rallied behind him. Conservatives loved the fire that West brought to the political landscape. Fans cheered him on, cementing his status as a creative idol. His ex-wife called him a “genius” in a statement.

What about other men in powerful positions who were given a break? Mel Gibson was accused of punching his girlfriend so hard that her teeth broke, and was recorded saying that if she “was raped by a pack of n****rs,” it would be her fault. (He pleaded no contest to a misdemeanor battery charge.) Robert Downey Jr. struggled with drug abuse, ending up in a neighbor’s bed while under the influence and losing custody of his son for a time. Owen Wilson attempted suicide after his break up with Kate Hudson and following years of addiction. Charlie Sheen was a struggling addict for many years, shooting his then girlfriend Kelly Preston and in later years having drug-fueled parties with porn stars while HIV positive and assaulting his wife. He received a slap on the wrist, only requiring 30 days in a drug rehab center, 30 days of probation, and 36 hours of anger management. And then there’s Bill Cosby, who was just released from prison after three years of his three-to-10-year sentence, effectively telling his accusers that his freedom is worth more than their trauma.

That Bill Cosby is free, and Britney Spears is not, is wrong and revolting. They’re not comparable situations, exactly, but proof nobody is fucking listening to women when they speak about their pain. Sixty courageous women ignored; another (extremely famous) woman ignored.

Ima need someone to tell me how Kanye West doesn’t need a conservatorship but Britney does?

Unfortunately, it’s unsurprising. Women have always been seen as objects to be controlled. In 2021, women are still experiencing a major pay gap (receiving an average of 80 cents to a man’s dollar), refraining from reporting sexual assault due to a system that sides with the accused, and having their reproductive rights stripped. It is as if we are still trapped in the 50’s, where women are second-class citizens. (For perspective: Roe v. Wade was only ruled a constitutional right in 1973 – 48 years ago – and the Supreme Court is currently preparing to hear an abortion case challenging the ruling.)

And it’s not just these big legal issues that put women under a man’s thumb. We are taught to keep our keys between our knuckles while walking through parking garages and to lock our car doors the moment we get in – but first, check the backseat. We can’t walk with headphones in, no matter what time it is. We shouldn’t wear short skirts, because if anything happens, well…what were we wearing? It’s a man’s world, and women are controlled within it, told how to act and what to do in order to abide by the unspoken rules of patriarchy.

A small example: the other night, my brother told my mother and me that his girlfriend didn’t get off of work until one in the morning. When my mother asked if she walked with someone else so she was safe, he was baffled – he hadn’t even thought of that being a necessity. It’s nothing against him – but men don’t have a clue about the world women live in. And if they did, they would not fight so hard against our rights.

Will we see an effort to make ‘conservatorship’ a more popular tool for patriarchal and misogynistic control over women? 🤬

Back to Britney: the world shared a collective jaw-drop when the judge ruled that the conservatorship should be extended. But, instead of silencing the world, it has only driven those who have watched the “car crash” to lobby harder for the pop star.

“I just want my life back,” Spears said. A fair request. Only time will tell when she is finally heard by the court, like she has so desperately wanted for the past 13 years.

Britney has had rough stages in her life as we ALL DO, and her team used this to take advantage of her. Her manager Lou Taylor and her own father Jamie Spears have exploited her for the last 12 years. Enough is ENOUGH… END THE CONSERVATORSHIP! pic.twitter.com/8SOya0tK2r

Mental Health Stereotypes Destroyed Britney Spears, And They Affect You, Too

#MeToo Is Getting A Second Wave In The Entertainment Industry

These Lululemon Dupes From Amazon Are Affordable And Just As Fashionable Keep Reading
Serena Williams Said “No” To The Olympics, And The Reason Why Is Pretty Awesome Keep Reading
Zola Is The 87-Minute Wild Ride Based On…A Twitter Thread? Keep Reading
Pinterest Is Banning Weight Loss Ads. Here’s Why It’s So Important Keep Reading
This Ahi Tuna Poke Stack Will Seriously Impress Your Friends This Summer Keep Reading
shesafullonmonet_ Follow
View Open