Cinderella (Ella, played by Camila Cabello) sings her way onto the movie stage, with: “All I know is love will save the day.” We all know the story. We’ve read it, watched it, and dreamed of one day being a part of a Cinderella romance. But this is not the old, well-worn Cinderella movie. It’s a musical, for one, but this live-action interpretation of the beloved fairy tale is poppin’ with a star-studded cast that includes Minnie Driver, Pierce Brosnan, Billy Porter, Idina Menzel, James Corden, and Nicholas Galitzine. 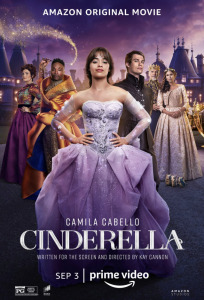 In this Amazon Original feature, Ella is not just dreaming of love, but also that her “name will be known.” She’s a dressmaker, not just for herself as in the age-old fairy tale, but to sell. She’s an entrepreneur, who’s unwilling to rely on anyone to achieve the success she’s so long yearned for. She’s even got a vision of what her shop will look like if only she could get her shot.

Shocking, I know, but it’s true. Of course, her evil stepmother says, “To think that any girl, let alone you, would have the audacity to engage in matters of business, it’s insane. I will not have you embarrassing this household with this blasphemy. Don’t ever let me catch you trying such nonsense.”

Yep, this Cinderella is a new female role model, with empowering #MeToo messaging woven into the movie’s glitz and glamour. It’s a feminist retelling for the ages, with everything we could dream of, including a dolt of a prince, Prince Robert (Nicholas Galitzine), who really doesn’t want to marry, anyway.

As the storyline unfolds, it becomes more obvious that nearly every character has a reason to fight against conventions to become what they dream and hope for. Even King Rowan (Pierce Brosnan) says, “I don’t make up the rules. I’m just the king.” They’re all trying to become what they can’t see.

It might be a “shot in the dark,” as Ella sings. But, Fabulous Godmother (called Fab G, played by Billy Porter) says, “Ok, let’s not ruin this incredibly magical moment with reason.” Those rich people might just change her life, right? What good is magic, anyway, if it can’t make all our dreams jump off the page and become reality?

What could Ella truly become if she only believes?

Obviously, the answer is that she will become whatever she wants to become. All those modern-day twists make the movie unique, but I think it’s fair to say that many reviewers are not loving the new Cinderella movie on Prime. But, I agree with Lewis Royle’s take: “You just need to let go and embrace it, warts and all.”

“This film was, above all else, fun. It made me feel good” says @ljwr_ of @PrimeVideoUK‘s #Cinderella.

Maybe you really have to be in the mood for this movie, but, as Royle says, “This film was, above all else, fun. It made me feel good. It’s a film for kids, and it’s meant to be silly at times, and make children laugh. A lot of the humour is childish, it kind of feels like a Roald Dahl adaptation in that regard, but the target audience is kids, so kids will love it.”

So, perhaps it is stupid, with stilted dialog. Or perhaps we just have too many unrealistic expectations. As for me, I loved this show. I wish I’d been able to see it when I was a young girl, wishing for all my dreams to come true. And, this is the Cinderella movie that I’d like my nieces to see and love.

I hope this Cinderella will inspire them to dream big. I want them to believe and KNOW that all their dreams can come true. But, more than that, I want them to say, as Ella does, “If I have to choose, I choose me.”

What are your thoughts on Prime’s Cinderella movie? Love it? Hate it? We’d love to hear your take. Sound off in the comments below.

For More Reviews On The Latest Shows And Movies, Read These:

Be Honest About Who You Are, And We’ll Share Which March Sister You Are Keep Reading
Rachel Hollis Is Active On Social Media Again: Is She Back? Keep Reading
Exploring Witchy History And The Myths Surrounding These Early Feminists Keep Reading
We Know Which Big Bang Theory Character You Are Based On Your Starbucks Order Keep Reading
Need A Laugh? Here Are The TikToks That Made Us Cackle This Week! Keep Reading
Leave A Comment
Share
Join the Conversation
Cancel reply
shesafullonmonet_ Follow
View Open