The Met Gala has always been the fashion event of the year.

Fashion publicist Eleanor Lambert created the event in 1948 as a way to “raise money for the newly-founded Costume Institute and mark the opening of its annual exhibit.”

Since its inception, celebrities and society’s upper crust have clamored for an invite to one of the most prestigious charity affairs.

The costume themes are a way to celebrate the year’s Costume Institute exhibition, and “the exhibition sets the tone for the formal dress of the night, since guests are expected to choose their fashion to match the theme of the exhibit.”

Guests honor that tradition, but some choose to send a deeper message with their Met Gala dresses and sometimes over-the-top attire.

We’re not complaining — the more flamboyant, the better.

At this week’s Met Gala, the theme was “American Independence” and several attendees chose their costumes with a deeper meaning in mind.

Dan Levy, the 38-year-old Emmy-winning “Schitt’s Creek” star, attended the soiree in an outfit designed by J.W. Anderson that pictured men kissing on the front in the shape of maps.

“A big heartfelt thank you to @cartier for so generously welcoming and accessorizing me tonight,” Levy wrote on his Instagram. “What I’ve so long admired about the Costume Institute is its commitment to educate and inspire people through fashion.

“I was fortunate enough to also get to work with @jonathan.anderson and the incredible team of designers and craftspeople at @loewe on a look that meant something to all of us. With support from the estate of American multimedia artist and LGBTQIA+ activist, David Wojnarovicz (1954-1992), Jonathan and the design team built upon an image of two men kissing from Wojnarovicz’s work, F— You F—– F—–, named after a homophobic cartoon the artist had come across.”

Levy felt it was vital to draw attention to what Wojnarovicz had to endure during his life with his statement outfit.

“But rather than feed on the message of hate, we wanted to celebrate queer love and visibility — acknowledging how hard artists like Wojnarovicz had to fight, while also presenting the imagery in a way that offered a hopeful message,” he confined. “Tonight, we’re celebrating the resilience, the love, and the joy of the community while honoring a crucial American voice that was taken from us too soon.”

The rapper and LGBTQ advocate Lil Nas X wowed the crowd with not one, but three Versace outfits.

Buzzfeed wrote that “Emma Chamberlain, who interviewed her fellow attendees on behalf of Vogue, caught up with Lil Nas X and simply *HAD* to ask him about the inspiration behind his outfits!!!”

“And then we break out of it a little bit more […] it’s kind of like me when I got into the industry. No one knew who I was.” 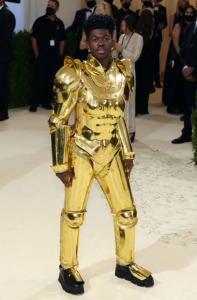 The second look had him fitted in golden armor, which Lil Nas X explained: “It’s like I built this shield around myself […] I came out, and this year, I feel like I REALLY came out. 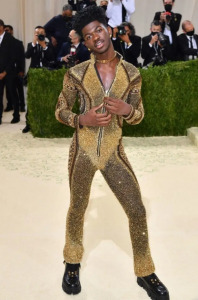 Kim K. and Her Personal Get-Up

Reality star and mogul Kim Kardashian took a hard left from her usual look, showing up in a full-body, blacked out cover-up complete with gloves and a face mask, designed by Balenciaga.

While Kim has not commented on her apparel choice, some are pondering whether it’s a ‘Silhouette Theory.’

An Instagram user, who was “inspired by conversations on TikTok, outlines that Kardashian’s look may be a commentary on her cultural significance.”

“You know a celebrity is an icon when you can recognize their outline without seeing their full embodiment,” she theorized.

A source told Page Six the former “Keeping Up With the Kardashians” star wanted to make a “new subculture and fashion statement” with her polarizing look.

“There’s no logo, no face, but everyone knows it’s her,” the source added.

The theory certainly tracks given that Kim’s body has been talked about for years.

Coming Out With a Powerful Message

Elliot Page walked his first red carpet event since coming out as transgender last December, showing up in a simple black tux with a green flower in his jacket pocket.

“Although the look seems understated, Page’s pop of green is a statement in itself as a symbol of queer love, originating from poet Oscar Wilde who often wore a green carnation on his own lapel,” reported Yahoo!Life.

The green carnation came to represent queer men, as it “embodied the decadent and the unnatural,” according to Oscar Wilde Tours.

For Page, the addition of the green flower had a deeply personal meaning — he had lived for years without showing his true self.

The only plain black tux I will praise with the Oscar Wilde inspired green flower 🧎🧎 Elliot Page I love you pic.twitter.com/EqMLVcY2UA

“I just never recognized myself,” Page told Time of his prior red carpet appearances and magazine spreads. “For a long time I could not even look at a photo of myself.”

One for the Horse Girls

At singer Kim Petras’s first Met Gala appearance, she neighed (I’m sorry, I had to) her way to the red carpet in a Collina Strada dress with a 3D horse head serving as bustier.

Below the horse head was a “panniered skirt featuring a print from the brand’s resort 2020 collection cheekily titled ‘Sistine Tomato.’” 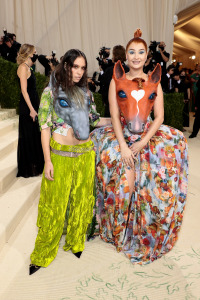 “So we’re gonna talk horse girl stuff?” says Hillary Taymour, the design mastermind behind Collina Strada, when Vogue talked to her a few hours before the gala.

“In her youth, Taymour admits she was an equestrian fanatic until another interest took hold in her late teens. ‘Okay, yes, I was a horse girl in a past life,’ she says, before breaking out into a guilty laugh, ‘and now I guess I’m a fashion girl?’”

“She (Petras) just really wanted to make a statement, and I think we are making a statement for sure,” says Taymour of the outfit, which was loosely inspired by Collina Strada’s fall 2021 show.

“For that collection, Strada enlisted Animorphs book series creator David Burroughs Mattingly, as well as her regular collaborators Charlie Engman and Freeka Tet, to create kaleidoscopic prints and patterns. It offered the exact kind of sartorial joy that has made Collina Strada one of New York’s most thrilling and adventurous fashion prospects.

Taymour approached the look in a simpler vein.

“Remember that time Kim Petras and I dressed up as horses for the Met gala?”

We say giddy up — fashion can be weird and fun while making a bold statement.

What did you think about this year’s Met Gala looks? Let us know in the comments!

For More Articles on Fashion And Current Trends, Read These:

These Old Fashion Trends Are Coming Back, And We’re 100% Here For It

Michael Kors Has Super Chic Pieces On Sale Right Now, And We’re A Little Obsessed Keep Reading
These 10 Autumnal Dresses Will Make “Thanks, It Has Pockets” Your New Catchphrase Keep Reading
Sweater Vests Are In Again — Here Are The 4 Best Ways To Style This Cozy Trend Keep Reading
Obsessed With 2020’s Strawberry Dress? These 14 Whimsical Dresses Are Perfect Fall Dupes Keep Reading
This Wardrobe Staple Is Our Go To For Fall Dressing, Year After Year Keep Reading
Leave A Comment
Share
Join the Conversation
Cancel reply
shesafullonmonet_ Follow
View Open