On September 11, 2001, coordinated attacks were carried out against the U.S. by the terrorist group Al-Qaeda. 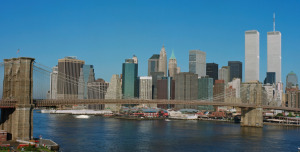 While news broadcasts were reporting on the North tower explosion, as they’d not yet determined the cause, the world watched live as the second plane was filmed crashing into the South tower.

Chances are, you remember exactly where you were on that day, down to the minute.

I was working at a New Jersey newspaper, my first job out of college, and walked into the newsroom at around 8:55 am.

Normally, the place was quiet in the morning. The TV was always on, but on mute. As I approached my desk there were people crowded around the television and the volume was cranked all the way up. 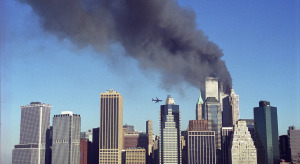 I asked someone what happened — they began to tell me that there was an explosion in NYC but were interrupted by a scream followed by gasps as we watched a plane fly into the other tower.

This was not a normal morning.

As more information began to roll in, my executive editor ran into the building and told me to come into his office.

He looked shocked, as did everyone around us, but he was a journalist, and he had a job to do. He told me that since I was the only other editor in the building, we were going to lay out a 16-page special edition of the paper dedicated solely to the horrific events of the day.

All I could do was nod — even as my brain protested, “You cannot do this, you’re a features editor, you don’t do hard news, you threw up when they sent you to cover a car accident” — I kept nodding.

As we were leaving his office, more screams from my colleagues glued to the TV hanging on the wall: One of the towers was collapsing. 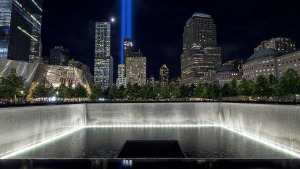 We sat down to get to work and every few minutes the crowd parked in front of the TV would burst into noise, but I did not look up — the images from the Associated Press were starting to come through the wire.

Most of the pictures I saw are the same ones that the world has seen, but there were a few about which even a grizzled old journalist like my exec editor said, “We can’t use those. We just can’t.”

We worked quickly and in stunned silence as writers and editors began trickling into the building, everyone looking what I can only describe as bewildered.

At 1 p.m., a friend in the art department grabbed me and told me I needed a break — my boss said, “I’ve been telling her that.”

I got up and we walked outside, where the smokers were congregated, and I did hear them asking me if I knew anyone working in the Twin Towers. 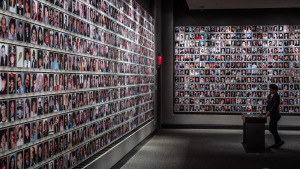 I did, and it hadn’t even occurred to me. We were 45 minutes away from Manhattan but it felt like it was happening much farther away.

As people say, “9/11 — Never Forget,” and I surely won’t, nor will anyone else who was old enough to understand what was happening.

As the U.S. began to pull the last troops out of Afghanistan in August, the world watched the chaos unfold as the Taliban regained control. 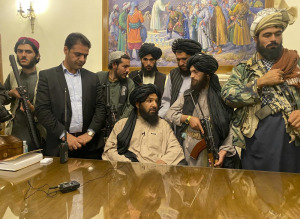 The government collapsed; desperate Afghans tried to flee, and a devastating scene showed people trying to cling to planes as they took off.

9/11 was the reason the U.S. was there — now that we are leaving, what did we accomplish?

Not a lot, it would seem.

The former President set a deadline for complete troop withdrawal by May 1, but that was extended to Aug. 31 by the current head of state.

And it was rumored to be extended again, due to the chaos at the Kabul airport while trying to evacuate vulnerable people.

“The last week at Kabul’s airport saw images of panic and desperation as mothers handed their babies to foreign soldiers over barbed-wire walls and Afghan civilians clung to airplanes as they took off in desperate attempts to flee their country,” reported CNBC.

The Associated Press reported that Biden was considering pushing the withdrawal of troops to Sept. 11, the 20th anniversary of the terrorist attacks on America that were coordinated from that country, several U.S. officials said.

“Biden’s choice of the 9/11 date underscores the reason that American troops were in Afghanistan to begin with — to prevent extremist groups like al-Qaeda from establishing a foothold again that could be used to launch attacks against the U.S.”

The extension also serves to get all Americans, allies, and Afghans out of the country.

But the extension “risked retaliation by the Taliban on U.S. and Afghan forces, possibly escalating the 20-year war. And it will reignite political division over America’s involvement in what many have called the endless war.”

Taliban spokesman Zabihullah Mujahed told The Associated Press that “the religious militia is waiting for a formal announcement to issue its reaction.”

The Taliban has threatened the U.S. with “consequences” if it went back on the May 1 deadline.

Does that mean the U.S. would be right back where we began before Sept. 11?

While the world scrambled to evacuate its own citizens along with Afghans clamoring to leave, a terrorist attack rocked Kabul.

The massive evacuations, already dangerous, became even more perilous when a suicide bomb attack claimed by Isis-K — a terrorist group and enemy of the West and the Taliban — killed 13 U.S. service members and at least 95 Afghans waiting by the airport gates on August 26. 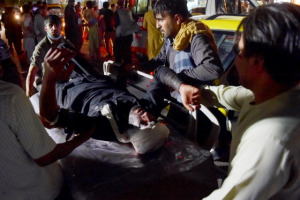 Another 18 service members and more than 100 Afghans were injured in the two explosions — Pentagon spokesman John Kirby said on Twitter that “there was an initial blast outside the airport’s Abbey Gate and at least one other explosion at or near the Baron Hotel, a short distance away.”

ISIS gunmen also opened fire on servicemen and civilians just after the Abbey Gate blast, according to Marine Gen. Frank McKenzie, the head of U.S. Central Command, who vowed “action against those responsible.”

Biden is facing mounting criticism around the world over his decisions, and he also promised “to hunt down the people responsible.” 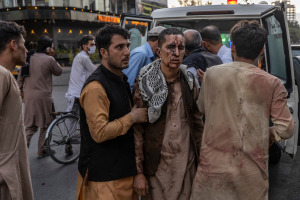 And it certainly does not garner confidence that anything was accomplished — was it even possible to accomplish what we set out to do?

President Biden has said that “we accomplished the objective” of preventing Afghanistan from being used to attack the U.S.

But what happens when we are no longer there?

In a Washington Post op-ed, Bradley Bowman, who served in Afghanistan, wrote, “Indeed, American and coalition forces in Afghanistan have helped accomplish that mission for two decades. 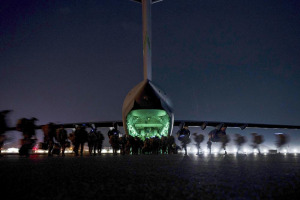 “But Biden’s remark leaves many with the incorrect impression that the international terrorist threat in Afghanistan is over.”

Defense experts say that the Afghanistan-Pakistan region remains a breeding ground for terrorist groups like Isis and Al-Qaeda.

“The U.S. intelligence community, in its Annual Threat Assessment, found that Al-Qaeda leaders continue calls for attacks against the United States and other international targets, and seek to advance plotting around the world.”

These threats were still present when troops were there, but our presence ensured we had insider intel. With the withdrawal, the call for attacks could certainly ramp up, but should we have stayed there forever?

The jury will continue to bicker about when and how we withdrew, but only time will tell.

The United States said on August 30, one day before the deadline, that “it had completed the withdrawal of its forces from Afghanistan in a chaotic airlift nearly 20 years after it invaded the country,” according to Reuters.

“There’s a lot of heartbreak associated with this departure. We did not get everybody out that we wanted to get out,” Marine General Frank McKenzie, the head of the U.S. Central Command, told a Pentagon news briefing. 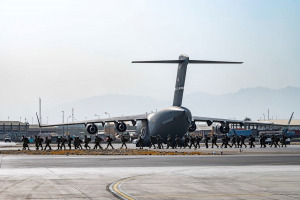 “But I think if we’d stayed another 10 days, we wouldn’t have gotten everybody out,” McKenzie said, adding that the chief U.S. diplomat in Afghanistan, Ross Wilson, was on the last C-17 flight out.

Americans leave Afghanistan in the same position before we sent troops there after 9/11 — with the Taliban in control.

The 9/11 Memorial & Museum held a 20th Anniversary Commemoration on the anniversary.

The focus of the commemoration was “the reading of the names by family members in-person. Throughout the ceremony, we observed six moments of silence, acknowledging when each of the World Trade Center towers was struck and fell and the times corresponding to the attack on the Pentagon and the crash of Flight 93,” the website states. 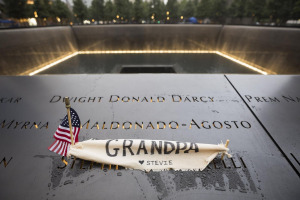 They encouraged houses of worship to “toll their bells at that time,” and the ceremony was exclusively for 9/11 family members.

Access to the Memorial began at 7 a.m. on the anniversary, and the commemoration was expected to conclude at around 1 p.m.

At sundown, the annual “Tribute in Light” will once again illuminate the sky in commemoration of the anniversary of the attacks.

The National Park Service’s Flight 93 National Memorial Pennsylvania in Shanksville held events throughout the week leading up to 9/11 and on the day of.

During the week of September 11, Flight 93 National Memorial hosted the ‘Witness to History’ speaker series. 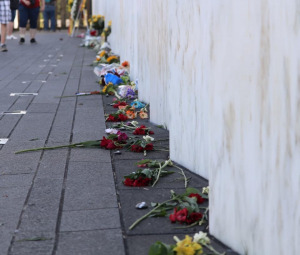 “At 10:03 a.m. — the moment Flight 93 crashed — the names of the passengers and crew members will be read, the Bells of Remembrance will be rung in their memory, and a wreath will be placed at the Wall of Names.

The Observance was free and open to the public. For a complete schedule of events, click here.

Jon Stewart and Pete Davidson are set to do a 9/11 anniversary comedy show for charity, with all proceeds going to 9/11 charities.

The two comedy icons will host “NYC Still Rising After 20 Years: A Comedy Celebration” at Madison Square Garden on Sept. 12, a day after the attacks’ 20th anniversary.

The special aims to honor the city’s resilience, the comedians said in a joint statement.

“We wanted to put on a fun celebration to honor this great city’s resilience. It’s nice to be able to do this with friends and people we love,” Stewart said in a statement.

The event honors an important cause for both Steward and Davidson.

Davidson was 7 when his dad, a firefighter, died while responding to the attack on the World Trade Center, while Stewart has been an advocate for 9/11 victims and first responders. 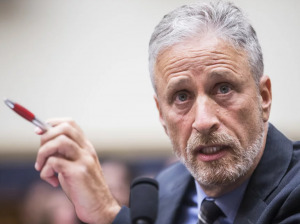 He’s been on Capitol Hill regularly attempting to get more financial support for those who suffered illnesses and injuries as a result of the attack.

In 2019, Stewart memorably confronted lawmakers at a House Judiciary subcommittee hearing on funding for the September 11th Victim Compensation Fund, saying it was “shameful” that more of them did not attend.

“They responded in five seconds. They did their jobs with courage, grace, tenacity, humility,” he said, his voice breaking. “Eighteen years later, do yours.”

The next day the House Judiciary Committee voted unanimously to approve the funds.

Do you remember where you were during the 9/11 attacks? How do you feel about the withdrawal from Afghanistan? Please share  below.

For More On Current Events, Read These Articles: