If you were to ask me when I first started dreaming of becoming a writer and editor, I can probably pinpoint it down to one moment: the first time I saw 13 Going on 30. In the 2004 film, a 13-year-old girl wishes to fast-forward to adulthood and wakes up to learn that she’s a 30-year-old working at her favorite magazine. Middle-school me saw Jennifer Garner making mood boards, organizing photo shoots, and eating Cheetos in her Manhattan apartment and went, “Yep. That’s the life for me.”

I’ve rewatched 13 Going on 30 several times since, alongside my mom, who can sing along to every tune on the soundtrack. We both love the movie. For her, it’s a nostalgic callback to the music and aesthetics of her own teen years in the ’80s. For me, it’s always been imagination fodder, inspiration for living a fun, glamorous life that’s motivated by being kind to other people — just like Jenna learns to do in the film.

And it doesn’t hurt that the style is amazing. In my favorite scene — a classic rom-com getting-ready montage — Garner’s character Jenna brushes on some ’80s-licious makeup, including bright blush and blue eyeshadow, admires her wall of shoes, and then steps out in a colorful little Versace number. Later, the dress swings and shimmers under spotlights as Jenna livens up a yawn-worthy party by leading the guests in an iconic group dance to Michael Jackson’s “Thriller.”

Now that dress and a TikTok trend are giving 13 Going on 30 new life among a fresh generation of fans.

♬ Crazy for You – Madonna

In June, TikTok user @victoriastanec made the post that started it all. “I was bored and started scrolling through Amazon and found the 30 going on 30 dress,” Stanec wrote in a video set to Madonna’s “Crazy for You.” The TikTok includes a screenshot of an Amazon listing for a Soliloquy-brand frock that bears a striking resemblance to Jenna Rink’s dress.

The dress has since blown up on TikTok — even actor Christa Allen, who played young Jenna Rink in 13 Going on 30, took to the app and shared the find. “TikTok, do your thing,” Allen says while wearing the dress onscreen.

Priced at a thematically appropriate (and crazy affordable) $20, Soliloquy’s dupe is pretty darn close to the Versace original. They both feature diagonal swaths of blue, green, purple, and red on the skirt and a cute cutout below the bust. Soliloquy does update their version with a tie-dye effect on the bodice and green and purple panels, making it even more on trend. 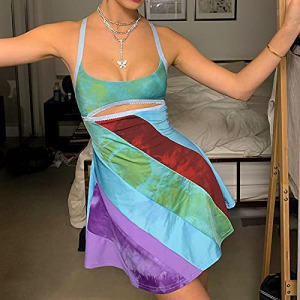 With Y2K style having a serious moment among Gen Z, it’s no surprise that TikTok users are falling in love with the vibrant ’80s-meets-noughties style of 13 Going on 30. And for those who know the “Thriller” dance by heart, the Amazon replica is the perfect throwback party dress — even if just on Halloween.

Are you as obsessed with this dress as we are? Are any other movie styles making a comeback that we need to know about? Let us know in the comments!

Want More Fashion Inspo? Then You Should Read:

I Stole Mamma Mia’s 70’S Styles For A Week, And Here’s What Happened

The Sensational TheColourMeMam Shares How To Wear More Color With Confidence