Being vegan during the holiday season is rough. My sister has been vegan for the past few years, and honestly? We just give her a huge portobello mushroom on Thanksgiving.

But those days are over. With TikTok trends, tofurky, and more, we’re giving you the vegan Thanksgiving of your dreams. No seriously — some of these mouth-watering recipes will star in your dreams tonight.

So vegans, rejoice! It’s going to be a portobello-less Thanksgiving this year!

Thank you Nora Cooks for the recipe! 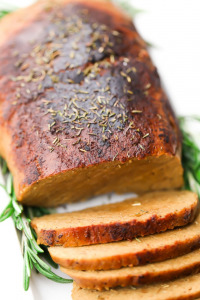 1. In a food processor or blender, add all the loaf ingredients, except the additional broth and vital wheat gluten. Blend or process until the mixture is smooth.

2. Transfer the blended mixture to a large mixing bowl.

5. Cover, bring to a boil, then reduce the wheat so it’s simmering, but not boiling too hard. Steam for 1 hour, and make sure to add more broth if it evaporates too soon. You can pour some additional broth over the roast halfway through.

6. Remove the pot from the heat and open the lid so the loaf can cool for a few minutes.

7. To brown the outside, heat a large skillet over medium-high heat. Add the vegan butter and let it melt, then add the soy sauce and stir. Place the cooked loaf in the pan and let it brown on all sides.

8. Place on a cutting board or serving platter, sprinkle with herbs, and slice thinly. Serve immediately with vegan gravy and mashed potatoes.

Thank you Clean Green Simple for the recipe! 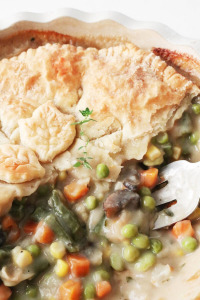 1. Preheat the oven to 400°F. In a large skillet, melt the butter and cook the onions and mushrooms until tender, about 5-7 minutes. Add the garlic, herbs, salt, and pepper, and then cook for another 30 seconds.

2. Add the flour and mix until fully dissolved. The onions and mushrooms should be coated and creamy.

5. Transfer the vegetable-gravy mixture into the greased deep pie dish.

6. Add the puff pastry dough on top of the vegetable filling. You can trim the dough to fit the circle pie dish. Press the edges of the dough with a fork and cut at least two slits into the top.

7. Bake for 40-45 minutes, or until the puff pastry is golden brown and the filling is bubbling. Garnish with fresh herbs if you’d like. Let it cool slightly, then serve warm.

Thank you Loving it Vegan for the recipe! 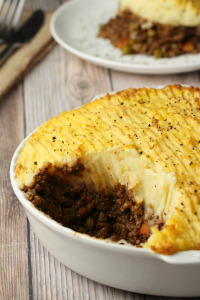 2. While the potatoes are cooking, start making your mince.

3. Add the mushrooms to a food processor and process until they’re finely chopped.

4. Add the onion and garlic to a pot with olive oil and sauté until the onions are softened.

5. Add the soy mince or TVP and sauté with the onion and garlic until they’re soft and browned. If your soy mince is a bit chunky, then use your spatula while sautéing to break it up into small pieces.

8. When the potatoes are cooked, add in the vegan butter and soy milk and mash it up. Add the sea salt and black pepper to taste.

10. Add the veggie mince to a pie dish and smooth down.

12. Dot with some vegan butter on top and sprinkle with black pepper.

13. Place into the oven and bake for 30 minutes. In the last 5 minutes, switch over to grill for some extra browning on top.

Thank you Clean Green Simple for the recipe! 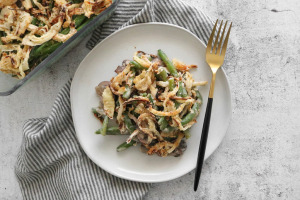 1. To make the “fried” onions, preheat the oven to 400°F. Soak the sliced onions in vegan milk for 10-15 minutes, tossing occasionally. Drain and set aside the milk.

2. In a separate bowl, combine the flour and spices. Toss a handful of onions in the flour until they’re coated. Transfer to a large baking sheet lined with parchment paper. Repeat with the remaining onions.

3. Coat generously with cooking spray. Bake for 25-27 minutes, or until crispy, stirring once halfway.

4. To make the green bean filling, bring a large pot of water to a boil. Add the green beans and boil until crispy, about 10 minutes. Drain and set aside.

5. In a saucepan over medium heat, melt 2 tablespoons of vegan butter. Cook the onions and mushrooms until soft, about 5-7 minutes. Add the garlic and soy sauce and cook for 1 minute. Add to the green beans.

6. In the same saucepan, melt the rest of the vegan butter over medium-low heat. Add the flour and whisk until golden brown. Slowly add the milk and simmer until thick, about 10 minutes, mixing continuously.

7. Add to the green beans and mushrooms. Toss well and transfer to a greased casserole dish. Bake for 15 minutes, add the fried onions, and bake for another 5 minutes. Serve immediately.

Thank you Love & Lemons for the recipe! 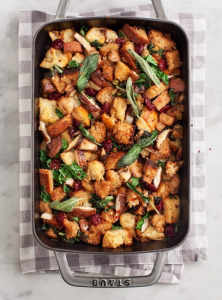 2. In a very large skillet, heat 2 tablespoons of olive oil over medium heat. Add the onions, mushrooms, ½ tsp salt, and several grinds of fresh pepper. Let the mushrooms cook until they begin to soften, 5-8 minutes. Stir occasionally. Add the garlic, celery, sage, and rosemary and cook until everything is soft and the mushrooms are golden brown, 8-10 minutes.

3. Add the balsamic vinegar, stir, and scrape any bits off the bottom of the pan. Add the bread and the remaining ¼ cup of olive oil. Toss to coat. Add the kale and cook until it begins to wilt, about 1 minute. Add 1 cup of the broth and stir.

4. Transfer to a casserole dish and pour the remaining 1 cup of broth evenly over the stuffing.

Thank you Bojon Gourmet for the recipe! 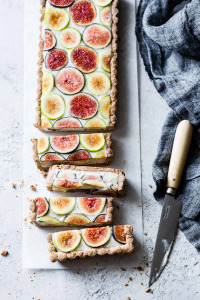 1. Position a rack in the center of the oven and preheat it to 350°F. Rub a 13 ½” x 4 ½” rectangular tart pan with a loose bottom with coconut oil, or spray lightly with cooking spray.

2. In the bowl of a stand mixer fitted with the paddle attachment, combine the almond, sweet rice, and chestnut flour with the tapioca starch, sugar, and salt. Scatter the vegan butter pieces over the top and drizzle with the vanilla extract. Turn the mixer to medium-low and run it until the dough comes together in clumps and the butter is worked through. This should take about 3-5 minutes.

3. Dump the crumbs into the prepared tart pan and press the dough evenly into the pan, starting with the sides and then moving to the bottom, keeping the edges square. Freeze until firm, 15-30 minutes.

4. Place the tart pan on a rimmed baking sheet and bake until golden all over, 20-30 minutes. Remove the crust from the oven and, while it’s still hot, press the sides and bottom firmly with the back of the spoon. Cool completely.

5. Drain the soaked cashews and place them in the bowl of a high-speed blender or food processor. Add the ground chia seed, maple syrup, lemon juice, ginger, salt, and water. Blend, starting on low and increasing to medium-high, scraping the sides of the blender as needed, until the mixture is silky smooth — about 3 minutes. Add the melted coconut oil and vanilla paste, and blend on medium to combine for about 20 seconds.

7. If the figs look dry, brush with a little maple syrup or honey diluted with boiling water. Use a large, sharp chef’s knife dipped in hot water and wiped clean between each cut to slice the tart. The tart is best the day of baking when the crust is crisp but will keep for up to 3 days refrigerated airtight.

Thank you Vegan with Curves for the recipe! 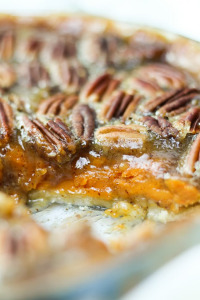 1. If you’re using a pre-bought crust, thaw it before you use it. If you have a pie crust recipe to use, prepare that before you prepare the filling.

3. Pour the water into a pot and bring it to a boil over high heat. Rinse, peel, and chop your sweet potatoes. Add the chopped sweet potatoes to the boiling water and boil for about 15 minutes, or until they’re ‘fork-tender.’ Once the potatoes are done, drain in a colander and add to a large mixing bowl.

5. Add your sweet potato filling to your pie crust and bake for 20 minutes to set the filling. While the sweet potato base is baking, rinse out the large mixing bowl you just used.

6. In a large mixing bowl, add the cornstarch, organic brown sugar, rice syrup, corn syrup, applesauce, melted vegan butter, and flaxseed eggs. Use your electric mixer to whip the filling. Taste and adjust the sweetness to your liking.

7. If you want, crumble up some pecans and fold them into your syrup mixture, or you can save that part for last and place them on top of your pie.

9. Put the pie back in the oven on the bottom for an additional 20-25 minutes until it bubbles and turns brown. Remove from the oven and allow it to cool at room temperature for at least 2 hours to set before serving or storage.

Are you vegan or celebrating this holiday with someone who is vegan? What’s your favorite vegan Thanksgiving recipe? Comment below!

For More Vegan Recipes, Read These: