Whether it’s for fun or for health, the vegan diet has increased in popularity in the last few years. People are ditching the meat, eggs, and dairy and replacing them with plant-based goodies all the time now! But the trick to vegan cooking & baking remains the same — to try to fool your friends into thinking it’s not even vegan! Here are some of the best desserts and dinners that will shock your friends into saying, “I can’t believe it’s vegan!”

Thanks to FoodByMaria for this recipe! 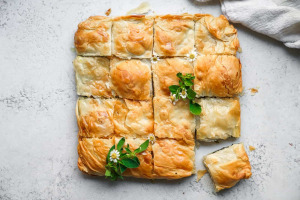 1. Heat your olive oil on medium heat in a large pot for about 30 seconds. Add the onions and leeks and sauté them until they’re caramelized and golden brown. This should take about 10 minutes.

2. Add in the green onions, dill, parsley, mint, nutritional yeast, seasoning, and vegetable stock paste. Cook for about 2 minutes, then add in the spinach. Cook it until there’s no moisture left.

4. Brush the phyllo with ¼ cup of olive oil. You can also keep the phyllo moist by covering it with a damp cloth.

5. Gently place one sheet of phyllo onto a cutting board. Coat it completely with olive oil and repeat that step with another sheet. It should add up to 5 layers in total. Transfer your phyllo to an 8×8 pan and pat it down until it’s flat. Transfer the cooled vegetable mixture to the pan and flatten it with a spoon. Repeat the step of the top 5 layers of phyllo and fold the layers inward.

6. Put the pastry in the freezer for 1 hour before baking.

7. Once the pan has cooled, place it onto a baking sheet and brush with olive oil once more. Bake it for 40 minutes and enjoy!

Thanks to Create Mindfully for this recipe! 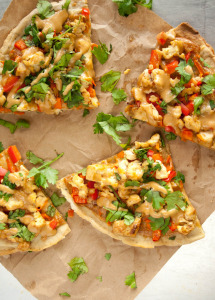 3. To make the ginger garlic tofu, combine the minced ginger, garlic, tamari, and sesame oil. Press the tofu with a tofu press or wrap it in a towel with a heavy object on top for at least 15 minutes to get the water out.

4. Slice the tofu and put it in the marinade. Marinate it overnight for the strongest flavor, but if you’re in a hurry you can marinate it for less than an hour.

5. Cook the tofu in the sesame oil until it becomes golden brown, then flip and cook the other side until golden brown.

6. Mix and cook the pizza dough according to the directions.

7. Layer the peanut sauce, tofu, carrots, and red pepper onto the pizza. Cook it at 450° for 10 minutes. Drizzle more peanut sauce and sprinkle cilantro on the top.

Thanks to Fitful Focus for this recipe! 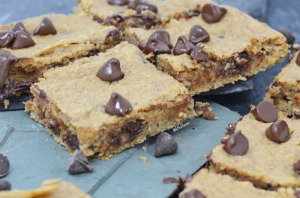 2. Put all the ingredients except the chocolate chips in a food processor and process until a toothpick comes out cleanly.

3. Fold in a ¼ cup of chocolate chips and pour the batter into the baking pan.

4. Sprinkle the remaining chocolate chips on top and bake for 25 minutes.

5. Allow the blondies to cool before you cut them!

Thanks to Show Me The Yummy for this recipe! 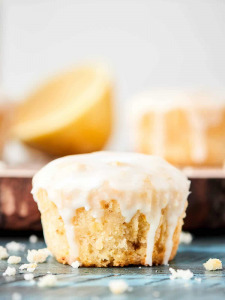 2. Whisk together the almond milk, coconut oil, lemon juice, and a banana in a large bowl.

3. In another bowl, whisk the flour, baking soda, salt, sugar, and lemon zest together.

5. Use a ¼ measuring cup to fill the prepared muffin tin.

6. Bake for 5 minutes in the preheated oven.

8. Remove from the oven and allow to cool.

9. To make the glaze, whisk the powdered sugar and lemon juice in a medium sized bowl. Dunk the cooled cupcakes in the glaze and serve!

Thanks to Bakerita for this recipe! 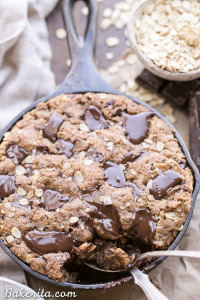 1. Preheat the oven to 350°F and lightly grease a 6-inch oven-proof skillet with coconut oil.

2. Beat the coconut oil, butter, and coconut sugar in a bowl or stand mixer until smooth. Add the flax eggs and vanilla and continue to mix.

3. Add the baking soda, salt, coconut flour, and rolled oats to the wet ingredients. Mix everything until it’s well incorporated. Finally, fold in the dark chocolate.

4. Press the dough into the pan evenly and sprinkle the top with a bit of sea salt. Bake for 20 minutes, or until it’s golden brown around the edges.

5. Let the cookie cool for 5 minutes and serve warm!

Thanks to Orchids + Sweet Tea for this recipe! 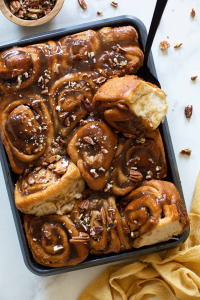 1. Start the dough by combining the yeast and 1 tablespoon of brown sugar in a bowl with an electric mixer. Slowly pour in the warm water and stir everything together. Let the mixture sit for 10 minutes while the yeast activates. It should start to foam when it’s ready.

2. Melt the butter and milk together over the stove top on low to medium heat. Stir the mixture frequently until the butter has fully melted. Allow the mixture to warm, but don’t get it hot. Add the lukewarm butter-milk mixture to the yeast and mix until well combined. Then add the all-purpose flour, bread flour, brown sugar, sea salt, and cinnamon to the wet ingredients and mix on a low speed until combined.

3. Change the mixer head to a kneading accessory and knead the dough for 5-10 minutes on high-speed until the dough becomes smooth and elastic. If the dough is too sticky, add 1 tablespoon of flour at a time until the correct texture is achieved. Once the dough is kneaded, add it to a lightly greased bowl and cover it with plastic wrap. Let it rise for an hour and fifteen minutes.

4. To make the filling, heat the vegan butter, brown sugar, and sea salt in a small saucepan over medium-high heat. Allow the mixture to simmer for 2-3 minutes, whisking frequently for about 3-4 minutes until the sauce looks like a caramel sauce.

5. Remove the mixture from the heat and fold the toasted pecans into it. Keep stirring the mixture for another minute until the pecans are covered with the sauce. Set the sauce aside and let it cool for about 5 minutes, then divide the sauce into two even amounts.

6. Once the dough has risen, preheat your oven to 375°F and flour a flat surface. Place the dough on it and roll it into a rectangle, trimming the edges if necessary.

7. Generously spoon half of the Praline Caramel sauce on top of the dough, spreading it out evenly. Sprinkle the top with some pecans as well.

8. Tightly roll the dough (long ways) and cut it into ⅕” rolls.

9. Pour the other half of the sauce into a prepared baking dish and evenly spread it out with a spatula. Place each roll into the dish and cover them with plastic wrap to let them rise for 20 more minutes.

10. Cook the rolls for 30 minutes, or until golden brown. Serve warm!

Which are the best vegan desserts and dinners? Tell us in the comments!

For More Vegan Recipes, Read These:

Host The Best Vegan BBQ With These Recipes

10 Ways To Keep Your House Plants Thriving During Winter Keep Reading
Not Getting A Good Night’s Sleep? How To Make Your Bedroom Stress Free Keep Reading
Christmas Dinner Sides That Will Make It The Most Magical Meal Of The Year Keep Reading
17 Outstanding Gifts for Outdoor Lovers In Your Life Keep Reading
20 Subscription Box Gifts That Keep Giving All Year Round Keep Reading
Leave A Comment
Share
Join the Conversation
Cancel reply
shesafullonmonet_ Follow
View Open