We love food but hate doing the dishes. So what’s the best way to not do the dishes? Make them edible! For Monet Meal Plan #8, we’re serving up edible dinners — all the way down to the bowl!

1. Preheat the oven to 425°F and line a rimmed baking sheet with parchment paper.

2. Rub the sweet potato skins all over with 1 tablespoon of oil and pat with 1 + ½ teaspoons of salt. Prick the potatoes with a fork a few times and place them on the prepared baking sheet. Bake until they’re tender, about 30 minutes.

3. Meanwhile, in a large pot, combine the chicken breasts, hot sauce, vinegar, cayenne, and the remaining ⅓ cup of ghee and 1 teaspoon of salt. Simmer over low heat for 20 minutes until the chicken is fully cooked.

4. Remove the chicken from the pot and use two forks to shred the meat. Return the shredded chicken to the pot, add the celery and carrots and cook over medium heat for 10 minutes.

5. Cut slits in the tops of the roasted sweet potatoes and open them up a bit with a fork. Spoon the filling into the potatoes and drizzle with ranch dressing, sprinkle with cilantro, and serve warm.

Thanks to Taste of Home for this recipe!

2. Place 2 avocado halves in a large bowl and mash them lightly. Add mayonnaise and lemon juice and mix until well blended. Stir in the crab, 3 tablespoons of cilantro, chives, serrano pepper, capers, and the pepper. Spoon the mixture into the remaining avocado halves.

3. Transfer to a 15 x 10-inch baking pan. Sprinkle the halves with cheese and paprika. Broil for 3-5 minutes, then sprinkle with the remaining cilantro and serve with lemon wedges.

Thanks to Eating Bird Food for this recipe! 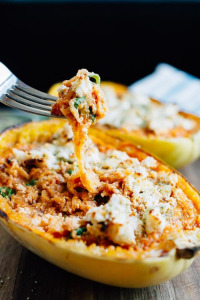 2. Chop the spaghetti squash in half lengthwise and scoop out the seeds with a spoon. Coat the inside of each half with a little olive oil, salt, and pepper. Place them on a baking sheet cut side down and bake for 40-50 minutes, or until you can use a fork to make spaghetti-like strands.

3. Combine the spaghetti squash strands, marinara sauce, ricotta cheese, and baby greens in a bowl and turn the oven temperature to broil.

4. Spoon the spaghetti squash mixture into the bottom of each squash half. Top with a little crumbled ricotta cheese and broil for about 5-7 minutes, or until the ricotta becomes golden.

5. Remove from the oven and sprinkle with a little parmesan.

Thanks to Women’s Health for this recipe! 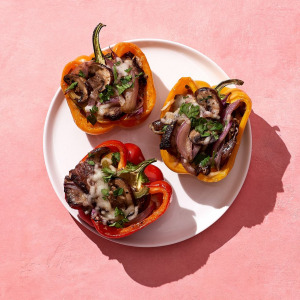 1. Preheat the oven to 425°F. Toss the halved peppers on a rimmed baking sheet with 1 tablespoon of oil and roast until they begin to soften — 12-15 minutes.

2. In a large bowl, whisk the mayonnaise, garlic powder, and ¼ teaspoon of pepper.

3. Heat a medium skillet on medium-high. Season the steak with ¼ teaspoon of both salt and pepper. Add 2 teaspoons of oil to the skillet, then brown the steak for about 2-3 minutes on each side.

5. Transfer the vegetables to a bowl with the mayonnaise mixture and the steak and toss to combine. Fold in the mozzarella as well.

6. Put a half cup of mixture into each of the peppers and bake until the cheese melts and the peppers are tender, about 25-30 minutes. Sprinkle with chopped parsley before serving.

Thanks to Food Network for this recipe! 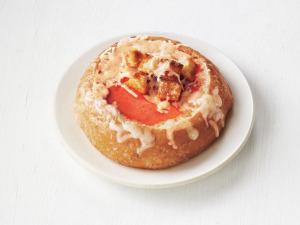 2. Heat 2 tablespoons of olive oil in a large pot over medium-high heat. Stir in the onions and cook until they’re softened — about 5 minutes. Stir in 3 minced garlic cloves, ½ teaspoon of oregano, and a pinch of salt. Cook for 30 seconds then add 1 cup of water, tomatoes, squash, chicken broth, parmesan, ¾ teaspoons of salt, and a few grinds of pepper. Bring the mixture to a boil then reduce the heat and simmer until the squash is tender — about 15-20 minutes.

3. Meanwhile, combine the remaining 3 tablespoons of olive oil, 2 garlic cloves, 1 teaspoon of oregano, and a pinch of salt in a small bowl.

4. Stir the heavy cream into the soup, bring it to a simmer, and remove it from the heat. Puree the soup in batches and serve it in the bread bowls. Top with the cheese croutons and parmesan.

Fully edible dinners? Yes please! Which recipe is your favorite? What theme should we do next week? Comment below!

For More Of Monet’s Weekly Meal Plans, Read These: