Skip to content
Home>Blog>Health + Wellness>10 Types Of Orgasms You...

There are so many different names for orgasms — but did you know there were different types of hitting the high spot?

I am aware of two types of orgasms, but there are 24. TWENTY. FOUR. How did I miss this and why did no one inform me there were so many ways of cleaving the pin (I learned so many fun terms while researching this article)?

While most types are specific to women — hell yes — men can also experience different types of orgasms. But we’re not going to talk about them — this one is all about us ladies.

So let’s explore 10 types of orgasms, and more importantly, how to have them!

This is one I know and have had many times, since it’s the most common and easily achieved type of orgasm.

The scientific definition is as follows:

“A clitoral orgasm usually refers to orgasms induced by stimulating the external part of the clitoris. The clitoris is a large, mostly internal organ that’s densely packed with nerve endings and the main source of sexual pleasure for people with vaginas. A small portion of the clitoris, called the clitoral glans, is located externally at the top of the vulva around where the labia meet, usually covered by a hood of skin that’s also quite sensitive. Stimulating this external bit of the clitoris with a finger, tongue, or vibrator tends to be necessary for the majority of women to have an orgasm,” says Justin Lehmiller, Ph.D., a social psychologist, author of the Sex and Psychology blog and expert at Lovehoney.

Notably, though, even orgasms from vaginal penetration can be considered clitoral orgasms. “The vagina and clitoris are intimately intertwined, with the clitoris having a sort of wishbone shape that surrounds a good portion of the vaginal walls,” Lehmiller explains. “As a result, vaginal penetration necessarily provides some degree of clitoral stimulation.”

How To Have A Clitoral Orgasm

According to Healthline, “Once the vulva begins to get wet — or after you add lube because not all vaginas get wet on their own — apply faster and harder pressure in a repetitive motion.

“Top off this motion with heavy pressure as the orgasm begins to intensify the feeling. Back down a little if the clit is too sensitive.” You can do this with either your fingers or your favorite sex toy!

A vaginal orgasm is a general term used to describe any orgasms induced through vaginal penetration, whether by fingers, toys, or penises.

“Less than one in five women can orgasm from vaginal penetration alone, so it’s not a very common way to climax,” according to Mind Body Green. “The clitoris also wraps around the vaginal canal internally and gets stimulated during penetration, so it’s possible that many types of vaginal orgasms are, in fact, just less intense forms of clitoral orgasm.”

Steps To Have A Vaginal Orgasm

A blended orgasm is when a vaginal and clitoral orgasm happen at the same time, usually including arousal of the clitoris while also participating in vaginal penetration.

“But because vaginal penetration also stimulates the internal portion of the clitoris, it may be more accurate to describe blended orgasms as the combination of stimulating the external and internal parts of the clitoris at the same time. Some people say blended orgasms feel more powerful or intense than the usual clitoral or vaginal orgasm on its own,” says Lehmiller.

How To Explore The Blended Orgasm

“To achieve a combo orgasm, combine clitoral and vaginal stimulation simultaneously, either in parallel or opposite rhythms — whatever feels best for you or your partner,” explains Healthline.

Pro tip: Wait until the receiver is thoroughly aroused before adding in penetrative play.

The G-spot orgasm is another type of vaginal orgasm and one I don’t think I’ve had because I have no idea where mine is?

“The G-spot is located on the front wall of the vagina, usually about 2 inches in, that sometimes feels good when stimulated or pressed against, again because of its proximity to the clitoris.

“The famed G-spot really seems to be where the clitoris, vagina, and urethra all intersect, so a big part of the reason G-spot stimulation is so pleasurable is likely because it offers clitoral stimulation,” Lehmiller explains.

How To Have A G-spot Orgasm

Lehmiller says, “A curved finger or toy can usually give you the optimal angle for hitting the G-spot.” 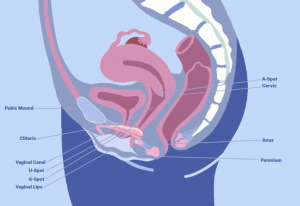 The A-spot is a nickname for the anterior fornix erogenous zone, a sensitive area of tissue at the end of the vaginal canal, between the cervix and the bladder. If you know where the G-spot is, move your fingers another 2 or 3 inches deeper on the same front wall of the vagina until you feel a soft and spongy area. This is your A-spot.

“It’s reported that 15% of women can achieve orgasm when this area is stimulated. Properly stroking this area that feels soft and spongy in a ‘windshield wiper motion’ can bring about an orgasm,” says Sherry A. Ross, M.D., OB/GYN, Lady Parts co-host and author of She-ology and She-ology: The She-quel. “It can be confusing since the A-spot may feel similar to other tissue in the vaginal canal.”

How To Have An A-spot Orgasm

The O-spot is the deepest vaginal erogenous zone and can be a source of orgasmic pleasure, according to some research. It’s located at the back end of the vagina between the cervix and the rectum, on the opposite side of the cervix from the A-spot.

The O-spot may be “behind or underneath the cervix,” Ross notes, and usually requires fairly long fingers or a toy to reach. “The exact location deep inside the back of the vagina may be hard to locate, but it’s thought that stimulating this area brings an orgasmic response.”

“Multiple orgasms” refers to the experience of having several orgasms repeatedly in a single sex session.

How To Have Multiple Orgasms

Be persistent and lucky — the clitoris is the only organ designed entirely for pleasure, so we’re physically designed to experience as much pleasure as we want. Yay!

Here’s how to make someone squirt, step by step.

How To Have A Full Body Orgasm

Stimulating and undulating the upper body during sex can help contribute to a full-body orgasm experience.

Choose the ones you’re curious about exploring and get to it with your partner or with yourself, and happy orgasming!

Were you aware there were so many types of orgasms? Share your thoughts in the comments!

Keep Scrolling To Read More About Health, Wellness, And Relationships: