Disney animation has outdone itself once again in Disney’s latest live action installment of Pinocchio! I was invited by Disney to attend an early screening at Walt Disney Studios of their latest film and was completely blown away. The music, the casting, the twists on the classic tale: they absolutely nailed it. Would I call it the perfect live action Disney film? Not entirely, and here’s why.

If you’re not familiar with the story of Pinocchio, allow me to give a little bit of a backstory. It follows a man by the name of Geppetto, a woodcarver and clockmaker from a small European town. He lives alone, unless you count his cat named Figaro and goldfish named Cleo. He dreams of having a family of his own, and on a very special night, he wishes on a star. His wish comes true but in the form of a puppet he made named Pinocchio. In order for Pinocchio to become a real boy, he must prove himself brave, honest, and good.

The newest interpretation of the story is pretty similar, although it has its own unique characters, songs, and laughs. In the latest installment of Disney’s live action film, you’ll meet some new characters that were not in the original story. You’ll see MANY Disney “Easter eggs” in this film, which are just small Disney-themed objects hidden in their films. You’ll laugh a lot, which was so unexpected for me! I, personally, have never been a fan of Pinocchio growing up. Something about scaring kids into doing the right thing just rubbed me the wrong way. The original didn’t have a lot of funny moments and lacked a real connection to its audience. 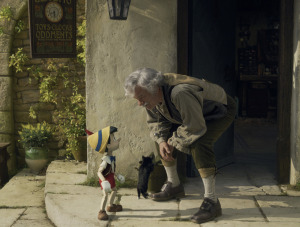 This newest version is packed with funny moments that made me belly laugh multiple times. Tom Hanks as Geppetto is an absolute gem. He nails the role as the father who would do anything for his son and shows us all why he’s one of the greatest actors ever.

One of the absolute highlights of this film is how beautifully illustrated it is. Director Robert Zemeckis created a fantasy with this film in every possible way! Classic scenes like the trip to Pleasure Island absolutely dazzle on screen with his ability to tap into the wonder of a child’s mind.

You will be captivated with just how beautifully illustrated this film is and almost forget about the original cartoon version altogether. Keegan Michael Key nails the role of Honest John, a deceptive fox who tricks Pinocchio into bad choices, and Luke Evans shows us all how musically gifted he is, once again. But the real star: Joseph Gordon-Levitt, who voices Jiminy Cricket. He does such an incredible job giving his own spin to the classic character we all know and love. 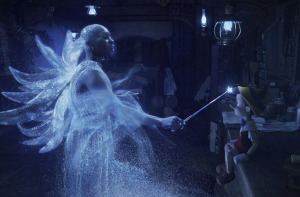 If I could say anything negative about this film, it would be that I, personally, would have written a different ending for it. Without giving too much away, it didn’t give us that satisfaction we need at the end of the movie to know that the main characters will be okay and happy in the end. We all need a good ending, something along the lines of closure. Unless a film promises a sequel, you need to wrap up the story in a way the audience feels it answered all their questions.

This movie ended with you wondering a bit, which left me a little dissatisfied. All in all, this movie will steal your heart and remind you to find the good in everyone. It will remind you that even in the worst of times, having the ones you love by your side means the most. Thank you Disney for inviting me to such a magical evening. Go watch Pinocchio on Disney+, available today!

Will you be watching the 2022 version of ‘Pinocchio’ on Disney+? Let us know in the comments!