Continuing in an unusually interesting August for movie releases, Paramount gives us a new spin on the traditional teen comedy formula with Oran Zegman’s Honor Society.

There’s the snark, the sassiness, the cringe, the friendships and the supposed edginess teens love in movies targeted at them. But all set in modern day 2022, instead of the 1980s-2000s. Like romantic comedies, the teen comedy is a genre that seems to have slipped off the public’s radar for the past decade. But in an era where nostalgia is being sold as a selling point higher than ever, teen movies might be getting a new wave of relevancy like romcoms appear to have gotten lately.

Honor Society begins like a celluloid collage of a lot of other famous coming-of-age comedies. Honor Rose (Angourie Rice) is similar in appearance and shadiness as Kathryn Merteuil in Roger Kumble’s Cruel Intentions (1999). Her ‘friends’ and sidekicks, Emma (Avery Konrad) and Talia (Kelcey Mawema), are almost the second coming of Gretchen and Karen in Mark Waters’ Mean Girls (2004). Honor is like Veronica Sawyer from Michael Lehmann’s Heathers (1989), in that Honor is popular by association more than by her genuine interest.

She pretends to enjoy being adored and people thinking she’s perfect, but in this new tale, Honor will go as far as it takes to leave town as soon as graduation ends. And that includes sabotaging three classmates who have a slightly higher chance of getting into Harvard than she does.

Not Your Average Teen Comedy

Gaten Matarazzo co-stars as one of Honor’s fellow Harvard-bound classmates, and Christopher Mintz-Plasse plays the school’s sketchy principal. With this summary, you would think Honor Society plays it safe with a typical happy ending. But surprisingly, it deviates for a refreshingly different optimistic conclusion. 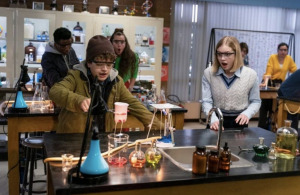 The main dilemma watching the new feature is that, while it did have most of the tropes and gags I enjoy in my own favorite teen flicks [including Honor breaking the 4th wall as much as John Hughes’ Ferris Bueller’s Day Off (1986)]; none of the humor really landed for me the same way. This could be a case of Zegman and screenwriter David Goodman hoping to bank on doing the bare minimum, or just me being too old for teen movies now. There is also a lacrosse coach character who is wildly inappropriate in front of students with foul language and crude references that I found too hard to suspend my brief disbelief with.

For the younger demographic, Honor Society might do the trick for a night home with Paramount+. Rice is always a delight on screen, even when she’s playing someone as divisive and bratty as Honor; and she has cute enough chemistry with Matarazzo. Those of us who are longtime fans of classic/famous teen movies might find Honor Society a bit redundant. But viewers actually still in high school could appreciate it.

Do you still enjoy teen movies? Does ‘Honor Society’ look up your alley? Tell us in the comments!