Remember “Lie To Me,” the critically acclaimed TV drama that aired for a few seasons on Fox? In the 2009 series, English actor Tim Roth starred as Dr. Cal Lightman, a so-called deception expert who solved investigations through his ability to read micro-expressions — brief, involuntary facial movements — to determine whether a person was lying.

I came for the suave British accent, stayed for the crash course in clinical psychology. As it turns out, the show’s binge-worthy plot was based on the work of real-life deception expert Dr. Paul Ekman, who pioneered the study of micro-expressions as they relate to emotions. According to Ekman, who published several books and offers micro-expressions training tools online, these nonverbal facial cues are a kind of universal language, a window into the momentary fluctuations in someone’s emotional state. And when one of us attempts to conceal our emotions, Ekman says, we inevitably produce emotional leakage that becomes evident across our faces, if only for a fraction of a second.

To the untrained eye, such subtle micro-expressions — and the complex emotional story behind them — can be difficult to recognize. But with some patience and structured training, Ekman says, anyone can become well-versed at reading faces and, ultimately, uncovering deception.

How To Spot The Non Verbal Cues

What are micro expressions and how can you learn them? http://t.co/8pq9Kf3y7E pic.twitter.com/ERqdRIKIE0

I have to admit, I was enthralled by this research (and by its depiction on the show) because I, too, wanted to become a human lie detector. After all, who among us hasn’t had to heal from a toxic relationship that left us with deep-seated trust issues, or just felt like our spidey-sense was tingling when we met up with a new Tinder date? And it’s not just personal relationships that could benefit from this newfound superpower. Learning how to spot a lie so readily could come in handy when making decisions on who to vote for in an important election.

After my “Lie To Me” binge, I headed to the nearest bookstore (yes, I was still going to bookstores back then) to browse Ekman’s best-selling books. Eventually, I walked away with two of his most popular how-tos, Emotions Revealed and Telling Lies. As it turned out, both books were a bit too dry to hold my interest, so I soon flitted to another, less-intellectual pursuit. And it’s probably a good thing, because not long after this fleeting obsession, new research revealed that this sensationalized lie-detection system was not as reliable or valid as once thought.

In one 2018 review of the microexpressions literature, for instance, the author concluded that “deception produces positive as well as negative emotional experiences and sometimes no emotions at all. Felt emotions do not have a one-to-one correspondence to outward emotions, and microexpressions are especially rare, leading to false negatives and false positives.” Other research pointed out that facial expressions are not as universal as Ekman proclaimed, because different cultures (e.g., Westerners vs. East Asians) have different ways of expressing the six basic emotions. In other words, micro-expressions are not biologically hardwired but, instead, dependent on various contexts and cultures.

Does this mean that all attempts at developing a lie-detection system are futile? Are we doomed to approach our interactions with a sense of dread because we don’t know whether to trust or not to trust?

Well, not necessarily. A few years ago, a group of determined researchers from Northeastern University and MIT’s Media Lab set out to approach this age-old question from a different, more modern angle: using artificial intelligence.

It’s Not An Exact Science

According to the lead researcher, Dr. David DeSteno, “Scientists haven’t been able to unlock the cues to trust because they’ve been going about it the wrong way. There’s no golden cue. Context and coordination of movement is what matters.” In order to isolate a set of cues that could reliably reveal deception or untrustworthiness, the team utilized a humanoid social robot named Nexi that conveyed one special benefit: the researchers could coordinate her movements in a perfectly precise way, thus controlling for independent variables in the study. 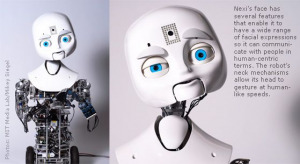 In the novel social experiment, DeSteno and his colleagues asked research participants to converse with the adorable Nexi for 10 minutes, then identify which subtle nonverbal behaviors, when exhibited together, signified that the robot was untrustworthy (for instance, would be likely to cheat them financially). The findings? Consistent with the team’s initial hypothesis, there was a clear set of four nonverbal cues that signaled an air of deception: 1) fidgeting, 2) hand touching, 3) leaning away, and 4) crossing arms. The conclusion was that, when demonstrated alone, not one of these cues necessarily indicated untrustworthiness; but when demonstrated in parallel, they were reliable indicators – even when participants deemed the robot likable at the same time.

Of course, the Nexi study was just one innovative approach to studying deception in a growing body of literature, one that is often riddled with replication problems. But in the meantime, the newer findings suggest that we do not have to endure an extensive training program — nor bury our heads in barely digestible books — to decide whether a person is worthy of our valuable trust. Instead of hiding behind sub-perceptual microexpressions, the evidence is right there in front of our eyes, should we choose to attend to it.

What To Watch For

“This is quite interesting,” reacted Dr. Stephen Sultanoff, a clinical psychologist and Pepperdine University professor, when I asked him about the study. “They are suggesting that there is a ‘distrust’ cluster of four items that untrustworthy people naturally exhibit and that we ‘naturally’ (unconsciously) react to that cluster and see those who exhibit them as untrustworthy. Perhaps they are suggesting that we make our unconscious evaluations of distrust more conscious.”

Dr. Amy Rollo, a licensed professional counselor, counseling supervisor, and school psychologist, confirmed that this cluster of nonverbal cues can reveal untrustworthiness or deception in clinical practice. “Keep an eye on the speaker’s hands,” she emphasized. “If they cover their mouth or touch their face often, these are nonverbal cues that the person should not be trusted during this interaction. Similarly, if the person covers up their vulnerable parts, such as the neck, chest, or head, they have an increased likelihood of covering something up or not wanting to talk about something,” she said.

But the Nexi study’s signals aren’t the only subtle-yet-discernible cues that someone isn’t telling the truth, Rollo explained. Others she has observed in practice include sudden changes in breathing, tilting or lowering the head, and sustained staring without normal blinking or eye movement. “If someone ignores your boundaries and is too close to your personal space, this can indicate that the person is showing power and a position of dominance, and you should be on guard during future interactions,” she added.

Still, Rollo warned, we should take care not to rely exclusively on these cues to determine if someone is lying, as no set of signals is 100% accurate. Reading people accurately requires a more zoomed-out look at the interaction as a whole, which includes nonverbal behaviors, verbal content, and even our own intuition.

“Trusting your intuition occurs when the neurons in the gut communicate with neurons in the brain and allow for physical feelings in the body, such as butterflies in the gut or muscle tightness,” Rollo explained. “When listening to intuition, understanding body language and assessing facial expressions, then you are prepared to assess trustworthiness.”

As for me, I’ll be revisiting my pursuit of becoming a human lie detector. See you at the next poker game, and watch what you do with your hands.

Most of us have a ‘tell’ when we are being untruthful. Tell us what yours is in the comments!

Want To Read More Health And Wellness Articles? Look Below:

Self-Compassion: Why It’s Important And 4 Ways To Build It In Yourself Keep Reading
The 5 Best Products To Help With Kids Bug Bites Keep Reading
Stop Doing These 5 Habits If You Want Better Brain Health Keep Reading
How To Manifest Your Dream Life While You Sleep Keep Reading
The 6 Best Ways To Capture Memories As Your Kids Grow Up Keep Reading
Leave A Comment
Share
Join the Conversation
Cancel reply
shesafullonmonet_ Follow
View Open