Whereas men are praised for receiving sexual content, women are labeled “sluts”, “easy”, and an abundance of other derogatory terms for sending them. And rather than call out those who release this content without a woman’s consent, it’s just assumed that it’s going to happen — and when it does, it’s the woman’s fault.

That is a disgusting outlook to have. Here’s why.

The Cost on Mental Health

The OG influencer Paris Hilton speaks out about the aftermath of the sex tape that was leaked of her by ex-boyfriend Rick Salomon back in 2004. Hilton is still dealing with the trauma of that ordeal and she tells vanity fair, it left her with PTSD.
——————————————————————————
The pic.twitter.com/wZP6wmjegF

That’s how Paris Hilton recently revealed she felt after her sex tape was leaked. Hilton’s ex, Rick Salomon, filmed a steamy session later titled “1 Night in Paris.” The tape was then released without her permission and picked up and distributed by Kahatani Ltd. Both Salomon and Hilton proceeded to sue Kahatani Ltd, though Salomon sued the Hilton family as well, claiming that Hilton had consented, and the family was guilty of defamation of character.

The internet was vicious. Late-night talk show hosts gossiped about it; Saturday Night Live ran with it, turning it into a comedic skit; Sarah Silverman joked about it and took jabs at Hilton at an award show Hilton was present at. “It was a private experience.… It still gives me post-traumatic stress disorder to talk about it.”

Yeah, the average woman isn’t famous — but that doesn’t mean they aren’t traumatized when their nudes and sex tapes land in laps they were never intended for. And just because these images and videos were made consensually does not mean they can be distributed without thought.

The Stats Behind Sexting

ZAVA conducted a study of 2,000 Europeans and Americans, analyzing the difference between the two groups regarding sexual texting. Thirty-two percent of American women aged 35 to 44 reported sending nudes, and another 27% of American women 45+ sent nudes. In all age groups, Americans were more likely to send risqué texts than Europeans. 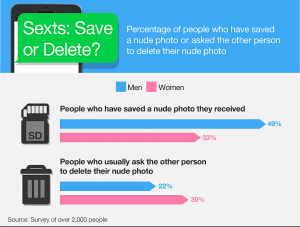 One infamous moment in recent celeb history: in the midst of a nasty breakup, Rob Kardashian released Blac Chyna’s personal nudes on Instagram as revenge. I’m not sure what he was thinking, because I’m not that cruel of a human being. My guess: woman scorned me and possibly used me, and I’m going to get back at her.

How to Protect Yourself if You’re a Victim

Victim-blaming is over. No longer should we punish, ostracize, criticize, or make fun of those who have been so disgustingly and blatantly violated. That’s why the most important first step is acknowledging that leaks are not your fault. It is your perpetrator’s for breaking your trust. 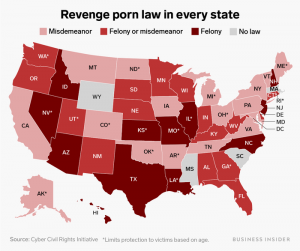 Going to the authorities may be intimidating, but it is absolutely a step you must take. They may ask uncomfortable questions, so prepare yourself for a deep probing into the how and why. Continue to follow up until you get a verdict on if they can help. If they can’t, fight your way to the district attorney.

Finally, if you’re being threatened on top of the releases, it can be tempting to hit delete and hide. Instead, take screenshots and document every single bit of correspondence with your attacker, as well as any sites and information that are distributing it. You can then take this information to the police and file a restraining order.

It’s time we stop blaming victims for what they did, and instead hold those who release these intimate items without consent accountable.

Has this happened to you? What did you do? Bring your wisdom into the comments.

Courtney Stodden Deserved Better, And The Internet Owes Them An Apology

Steal Her Style! Fran Fine Wasn’t Afraid To Dress Bold In The Nanny Keep Reading
This ASOS Sale Will Give You 20% Off The Hottest Trends Keep Reading
I’m In a Long-Term Relationship — How Did I Test Positive For HPV? Keep Reading
Orange You Glad We Found These Recipes? Our Favorite Summer Citrus Desserts Keep Reading
These Are Our 6 Favorite Products From Sephora’s New Clean Beauty Brand, LYS Keep Reading
shesafullonmonet_ Follow
View Open