The response was vicious. Hutchinson’s agent dropped him; he was labeled a pedophile; and he was, eventually, blacklisted from Hollywood. (As of now, his most recent appearances were in 2017, on Celebs Go Dating, Dr. Phil, and Gown and Out of Beverly Hills.)

And rightfully so. Because in the middle of all of this was Stodden, who was thrust into the limelight due to the relationship. Keep in mind: they were only 16 – a child – yet the cyberbullying was rampant. And while it was 10 years ago, Stodden is still facing the pain from the past.

Stodden has spoken about the treatment they received on social media. Namely: from model and chef Chrissy Teigen. Stodden cited tweets that Teigen had sent them publicly, and in an interview with the Daily Beast, Stodden said “She wouldn’t just publicly tweet about wanting me to take ‘a dirt nap’ but would privately DM me and tell me to kill myself. Things like ‘I can’t wait for you to die.’” 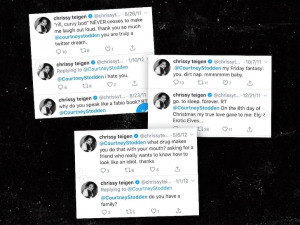 Teigen quickly took to Twitter, issuing a groveling apology about how she was a “troll” looking for attention. (Teigen was 26 at the time.) She explained that she had reached out to Stodden privately, but thought “since [she] publicly fueled all this, [she] want[s] to also publicly apologize.” 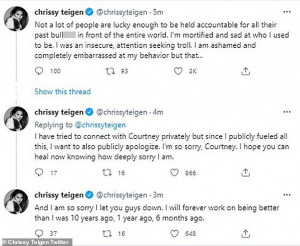 The problem, however: according to Stodden, Teigen apparently did not reach out privately as she had claimed publicly. “I accept her apology and forgive her. But the truth remains the same, I have never heard from her or her camp in private,” Stodden wrote in a caption on a photo showing they remained blocked by Teigen.

But it’s bigger than Teigen, and it didn’t start with Stodden. The facts remain: the industry preys on the young, and they prey on them often.

A History of the Young

In 1959, 14-year-old Priscilla Presley met Elvis Presley, then 24, at a party. Her parents were understandably unhappy with a much-older man taking interest in their daughter, a minor at the time. However, he promised to follow their rules – the first, getting her home on time, for example – and her parents eventually allowed their relationship to grow. In 1962, a 17-year-old Priscilla then managed to convince her parents to let her visit Elvis alone for two weeks, so long as she was chaperoned and wrote home. She continued to work her parents, leading to a move to be closer to Elvis on the condition that he would marry her. Elvis accepted.

This pattern repeats itself throughout Hollywood. While Melanie Griffith and Don Johnson worked together when they were 15 and 22, respectively, a relationship developed. This resulted in a six-month marriage when Griffith turned 18. Jerry Seinfeld dated Shoshanna Lonstein Gruss when she was 17 and he was 38. And who could forget Aaliyah and R. Kelly, who married when Aaliyah was only 15 (though the marriage certificate claimed she was 18, while Kelly was 27 at the time)?

It’s not just men who are attracted to youth – look no further than Sam Taylor-Johnson, who met her husband, Aaron Johnson, when she was 42 and he was freshly 18 on set. The two have lasted, with two daughters, but the scandalous nature was cause for criticism (she had only divorced her ex-husband one year prior, after 11 years of marriage).

Back to Stodden: The Adults That Failed Them

The main question I have: where were Stodden’s parents?

According to their history, Stodden’s mother, Krista, was aware of the communication between Stodden and their eventual ex-husband. Hutchinson allegedly thought Stodden was an adult; when he found out their actual age six months later, he told their mother that he would stop talking to Stodden should Krista request that.

However, Krista and Stodden’s father were convinced that they were “a good Christian girl” and that “Doug [was] a wonderful man and we love him.” So, they allowed Stodden and Hutchinson to choose their own path. When they decided to wed, Stodden’s mother signed off on it, because – let me repeat – Stodden was only 16, and could not legally wed without permission from their parents.

The treatment Courtney Stodden faced was honestly horrific. I remember watching Couples Therapy and being disgusted how that was allowed considering the grooming. Couldn’t believe their parents signed off on the marriage like I hope they are okay.

Years later, Stodden can acknowledge that the adults in their life failed them spectacularly. In an Instagram caption, they wrote “I look back at this picture and feel absolutely taken advantage of” on a picture with Hutchinson. (It has since been removed.) Ten years later, it appears that Stodden is aware of the neglect they endured. “I’ve felt completely trapped and manipulated by adults // growing up in such an environment — it became a lonely and dark place.”

Addressing Hutchinson, they wrote, “I’ve been scared to even speak up about feeling groomed or being verbally abused…because I was a child and he was 50 when we married.” Stodden continued, “please don’t ever do this to another minor again. It’s not right…even if the parent signs off. Wait a respectable amount of time before marrying. Children aren’t on your level.” 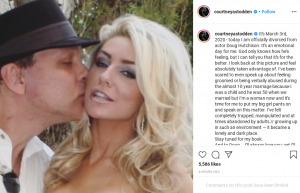 This is where I want to apologize to Courtney Stodden, as should many others. We made fun of a 16-year-old who didn’t know better, who thought they were in love with someone, who thought they were mature enough to marry someone in his fifties. They should not have been on the receiving end of death threats, and it’s time we acknowledge, like Teigen, that we should do better.

So, Courtney, as someone who dated far above her own age, I get it. The power is attractive, and the idea of being “mature” for one’s age is addictive. But we deserve better. We always have. And I’m sorry.

The world owes you an apology. I’m so sorry for what happened to you. It’s vile and disgusting. Your compassion is refreshing.

What are your thoughts on these relationships? What do you think of Stodden’s situation? Let us know below.

#MeToo Is Getting A Second Wave In The Entertainment Industry

Self-Objectification Is A Danger To Women — Here’s Why

Is Kendall Jenner Appropriating Culture (Again) With Her New Brand, 818 Tequila? Keep Reading
Host The Best Vegan BBQ With These Recipes Keep Reading
Which Weird Laws Are Fake, And Which Are Real? Keep Reading
Midsize Bodies Are Beautiful, And These TikTok Creators Are Highlighting Them Keep Reading
I Checked Out goop’s Store, And The Products Are… Interesting Keep Reading
shesafullonmonet_ Follow
View Open