As summer rolls around, body obsession begins. With magazines, trainers, gyms, and social media expressing that it’s time for your ultimate beach body, it makes me wonder: why is there THE ultimate beach body? What happened to loving the skin you’re in?

The body positivity movement is sweeping the globe right now, with discussions opening up about health mattering more than size. Unfortunately, there are still many stereotypes existing: bigger women need to exercise more and eat less, and thin women need to eat a hamburger and quit the gym. It’s extremely toxic, yet here we are in 2021, fighting back against these accusations.

The biggest problem: for those who are insecure about their bodies, it can be easy to fall into unhealthy routines or believe that the haters are right. That’s why I love the body positivity movement – and I’m not the only one.

How the Body Positivity Movement Started

Body positivity has been around for decades, with it notably beginning in 1969. A man tired of body shaming gathered others to form the National Association to Aid Fat Americans (now known as the National Association to Advance Fat Acceptance, or the NAAFA). In 1973, another group called the Fat Underground released their Fat Manifesto, demanding “equal rights for fat people in all aspects of life.” The activism spread like wildfire, with many other groups forming in support of the movement.

In the 2000s and 2010s, body positivity began dominating social media as online forums died down, and people moved to websites such as Tumblr and Instagram. There, body love was preached and celebrated. The hashtag #BodyPositivity was born, with people feeling empowered by history to love themselves. Currently, the #BodyPositivity tag on Instagram has more than 7.5 million posts.

One of the most vocal people in the body positivity movement is Jameela Jamil, who founded i_weigh. It started as an Instagram account, sharing body positivity photos that advocated for an end to toxic diet culture, denouncing criticism of any and all bodies, and spotlighting community members for who they are, not what they look like – think traits such as creative, a good friend, and hardworking.

On Instagram, Jamil explained that she started i_weigh “so that the moments that these women fought back and took pride in their lives beyond their exterior can live on forever.… FUCK SOCIETY’S BULLSHIT EVALUATION OF OUR WORTH.”

Spurred by a post with the Kardashians and their weight, Jamil is voracious in her take-down of society’s size obsession. Regularly sparring with celebrities (like the Kardashians) for diet promotions and lack of transparency regarding their resources, such as private trainers and chefs, she is dedicated to normalizing every body. 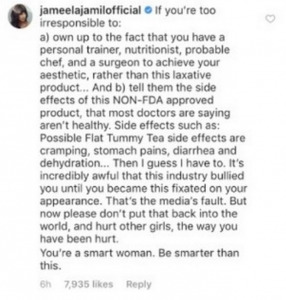 As of publishing, i_weigh’s Instagram has more than one million followers, with its bio declaring its purpose as being “about radical inclusivity, so that no one feels alone.” On their website, they celebrate that they “assisted in changing global policies at Facebook and Instagram around diet & detox products being shown to minors.” It’s a bold and extremely necessary stance, and these platforms listened thanks to the hundreds of thousands who advocated. The message is clear: we are not here for your judgement.

While the body positivity movement is anchored in normalizing bigger women’s bodies, women who are thin feel pressure, too. Despite the many articles that shame thin women for attempting to participate in the body positivity movement, it’s important to acknowledge that body shaming happens to everyone – even those we believe have the “perfect bodies.” While society regularly peddles thinness as the ideal, it can contribute to a diagnosis of Body Dysmorphic Disorder (BDD).

Affecting approximately one in 50 people – or 1.7% to 2.9% of the population, aka five to 10 million people – BDD (defined as “pathological preoccupation with an imagined or slight physical defect of one’s body to the point of causing significant stress or behavioral impairment in several areas [as work and personal relationships]” by Merriam-Webster) is more common than anorexia. In a survey, it was found that (perhaps unsurprisingly) BDD was more likely to affect women. Most begin to experience BDD in their teens as their bodies change, and while the majority of cases are temporary, those who feel unsupported through this time of change may bring BDD into adulthood.

BDD has been found to be more prevalent in those with mood disorders, OCD, and eating disorders. Characteristics include obsession with control and constant anxiety, be it due to their own personal view of themselves or a fear of how others see their bodies.

Body positivity is a crucial movement working to neutralize each body and empower people no matter their size. As someone still getting used to her new body post-medication-change, it’s inspiring to log onto Instagram and see bodies that look like mine – and the owners loving themselves to the fullest extent. My goal is to genuinely join the movement for myself. And, based on how welcoming the world is, I think I’ll get there.

How are you participating in the body positivity movement? Has it helped you? Let us know in the comments.

Diversity In The Media: Is The World Finally Ready To Accept All Bodies?

Celebrities Love To Endorse Diets On Instagram. Can This Lead To Disordered Eating?

Easy Ways To Donate: Shop With These Companies That Give Back Keep Reading
The Reckoning For Racism in Healthcare Is Here: Is There Hope? Keep Reading
Anita Hill Advocates For An End To Gender Violence In Her Book, ‘Believing’ Keep Reading
Teaching Your Children About Consent? Here’s What To Know Keep Reading
Women Run The World…So Why Aren’t More Women Millionaires? Keep Reading
Leave A Comment
Share
Join the Conversation
Cancel reply
shesafullonmonet_ Follow
View Open