Make-A-Wish is known for its ability to brighten children with terminal illnesses’ lives. I would know – I was one of them in 2009. It’s a life-changing organization, dedicated to bettering the lives of these children and their families, if only for a few days. The memories last a lifetime.

The Iowa chapter, one of Make-A-Wish’s 60 in the US, has fulfilled plenty of wishes (granting their 4,000th in 2020 – an amazing number – with a promise of granting 170 wishes per year). On their site, they state that “together, we create life-changing wishes for children with critical illnesses.” Examples of this: they granted a six-year-old her wish of meeting a unicorn, and a young boy wished to be a firefighter for a day. The joy that comes from these wishes cannot be measured. 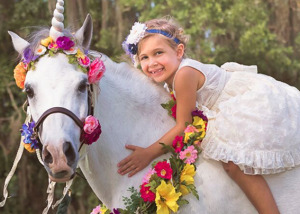 That’s why recent news is heartbreaking, to say the least. The CEO and president of the chapter was arrested last week on felony charges for embezzlement.

Jennifer Woodley was arrested in January for allegedly embezzling a striking amount of money from the foundation. This money included giving herself a bonus that was not approved by the board, and using the company credit card for 84 personal charges. In total, the amount she embezzled from the foundation for her bonus totaled $15,540; the personal charges totaled more than $23,000.

To make it even worse: these charges were made within a 10-month period, and she had only been CEO and president since August of 2019.

A charging document alleges that Jennifer Woodley’s embezzlement totaled nearly $41,000, but restitution has not yet been set. https://t.co/ft2IPC676X

In July of 2020, Woodley was dismissed by the organization after financial irregularities were found in an internal compliance review. Following the dismissal, Joshua Norton, Chair of the Board of Directors, said at the time “We are working on assessing the full extent of these irregularities and determining next steps.”

Part of the irony came from the fact that Woodley’s daughter had received a wish to go to Walt Disney World Resort. At the time of her appointment, Norton said, “As a wish mom and proven fundraiser, we look forward to how she will advance the mission and enable the chapter to continue to grant wishes to children facing critical illnesses.” And Woodley asked at the time, “What kind of example do you want to set for them instead of feeling bad for yourself?” 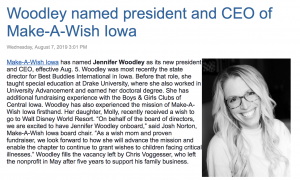 At the time of her arrest in January, the current board chairman, Dave Farnsworth, said that the chapter was “deeply saddened and disappointed by the events” that had led to her investigation and arrest. On the topic of the funds, he emphasized that “We know that we have an obligation to safeguard every dollar given to us.” In January, they were considered “alleged” felonies, and she had been released on bond.

this is a special kind of messed up. also, her name is jennifer woodley and should be said. https://t.co/iRPMCaKHDA

However, after the investigation, Woodley had a change of heart (whatever spurred that, I’m not sure) and proceeded to plead guilty to class C felony charges: two counts of first-degree theft and one count of unauthorized use of a credit card. Prior to her plea deal, her attorney, Nicholas Sarcone, said that Woodley “maintains her innocence, and [they] look forward to [their] day in court.”

While these felonies normally carry a prison sentence of 10 years, prosecutors will recommend five years of probation, as well as paying fines and restitution. Her attorney said they were hoping to have the case expunged from her record once she completes her expected sentence.

The ex-CEO of Iowa’s Make-A-Wish pleaded guilty to embezzling $41,000 in charity funds meant for sick children and their families.

Jennifer Woodley gave herself unapproved raises and a bonus. Lawyers want charges expunged from her record if she completes recommended probation. pic.twitter.com/XNPbEIWPtX

Now, the sentencing hearing is scheduled for July 2nd. And while her attorney is hopeful, Woodley’s actions will not be forgotten, even if there is a successful expungement. It’s a story of greed, of irony, of the complete opposite of a mission statement dedicated to selflessness. As a Wish kid myself, I am sickened by this story. Thanks to Woodley, the wishes within her time of tenure will be tainted. It’s up to the foundation and families to decide if they can forgive.

How did she even make President and CEO? Wow.

What are your thoughts on Woodley’s sentence? Let us know in the comments.

Naomi Osaka Was Forced Out Of The French Open, And The Reason Is Problematic

Is Josh Duggar Finally Being Held Accountable For Years Of Abuse?

My Face Is Sculpted And Glowing With These 7 Amazing Summer Bronzers Keep Reading
Looking To Eat Organic On A Budget? These 4 Tips Will Make It Easy Keep Reading
Mark Ruffalo Takes On The True Story of DuPont in “Dark Waters” Keep Reading
This Mushroom Truffle Butter Risotto Will Make You Think You’re In Italy Keep Reading
This Robo Vac Is The Best Purchase I’ve Ever Made — And It’s Cheap Keep Reading
shesafullonmonet_ Follow
View Open