There are two types of people in this world: those who wrinkle their faces and squeal “TMI!” if you dare whisper that you’re on your period, and those who react to the same utterance by bursting with empathy and asking if it hurts.

Back when I was grappling with puberty, most people fell into the former category – even my equally afflicted female classmates, who’d sooner suffer in silence than face the stigma of talking about their menses.

Fortunately, our culture is finally coming around to embracing period positivity, which involves normalizing menstruation and rejecting the shame that has historically been associated with it. For instance, Midol’s “The Real Reason” campaign encouraged women to speak out about their period pain. Even more recently, the pain-relief company Somedays hooked up men to period-pain simulators so they could understand what cramps are really like for women (spoiler alert: suddenly, they didn’t act so macho).

As someone whose menstrual cramps can be downright debilitating, I welcome the #PeriodPositive movement with open arms. I mean, how many times can you claim the stomach flu or rotten sushi before people question your excuses? Now, whenever I have to turn down an invite due to my dreaded flow, I sum up my response in two confidently uttered words: “Shark. Week.” (‘Nuff said.)

Still, while period pain has become more widely appreciated as a side effect of our monthly cycle, it’s far from the only symptom we suffer. What our biologically male counterparts (and the mainstream media at large) so rarely understand is the uncomfortable bloating that accompanies the bleeding. Ladies, you know what I’m talking about – you’ve finally gotten your cramps under control, but you still can’t squeeze into your jeans. How are you supposed to gussy up for a night on the town when your body is so damn puffy? 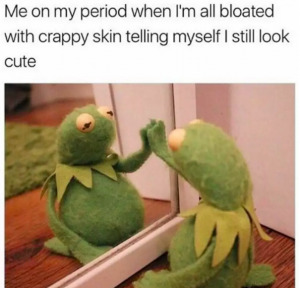 Good news, gals: we’ve got the fixes! First, our women’s health experts helped us debunk 7 major menstrual myths, and now they’re back to help us banish our bloating (finally!). If period bloat is a symptom that is driving you bananas, read on, because our OB/GYNs are here to explain why it happens in the first place, and how we can fight our way back into our favorite pants.

So, why do you feel so puffy around your period? According to Dr. Shweta Shah, an OB/GYN and infertility specialist, hormonal fluctuations are the primary culprit.

“When you ovulate, your body produces progesterone in preparation for a potential pregnancy. If you don’t become pregnant, the progesterone levels drop and your body starts to shed the uterine lining. This shedding process is what causes your period,” Shah explains.

“The hormone fluctuation doesn’t just impact your uterus – it also affects your digestive system,” Shah points out. “Progesterone slows down the movement of food through your digestive tract, which can lead to gas and bloating.”

This rapid drop in hormones first occurs during the week leading up to your period – called the luteal phase of your cycle – and is responsible for the dreaded PMS, or premenstrual syndrome. Even once you’ve started bleeding, the bloating and other unpleasant symptoms (including gas and constipation) persist because hormonal shifts have already produced a cascade of effects in the body, one of which is salt and water retention, which causes your cells to swell, at least until your period is over.

Goodbye for now, skinny jeans; we’ll see you in four or five days.

How To Get Rid Of Period Bloating

Not so fast…you needn’t bundle up in your baggy pajama bottoms just yet. While you can’t easily prevent your hormones from swinging (at least, not without artificial methods like birth control), there are some simple lifestyle shifts that can keep your bloating at bay. From changing up your diet temporarily to heading out for a run, here are five foolproof fixes to combat period bloating, according to the experts:

Don’t worry, you don’t have to put down the spicy Dorito chips for good – but avoiding salty foods and refined carbohydrates for the days leading up to your period can drastically minimize bloat, says Gaby Udabor, a holistic nurse practitioner and functional medicine health consultant. Instead, Udabor recommends, fill up on potassium-rich foods such as bananas, sweet potatoes, cantaloupe, mushrooms, oranges, and cooked broccoli before and during your period. Also, “try natural diuretics – such as watermelon, spinach, garlic, and cucumber – to help you maintain normal bowel movements before and during menses,” she says.

It may sound counterintuitive, but your body needs more water – not less – before and during your period to banish bloat. Drinking extra water can help flush out your system and rid your body of excess sodium. “Dehydrating yourself to get rid of bloating is unhealthy and dangerous and will only make the body hold on to water even longer,” Udabor explains.

As a self-proclaimed coffee addict, I know how hard it can be to pass on the morning cup ‘o’ joe. But, says Udabor, “caffeine sensitizes estrogen receptors,” meaning that it disrupts your hormone balance and can make your period symptoms worse. Plus, caffeine can cause vasoconstriction – the narrowing of blood vessels – that leads to more severe menstrual cramps. Instead of coffee, Udabor recommends, start the day with a cup of green tea. “It has much less caffeine and includes a good dose of L-theanine, which helps to calm adrenaline,” she says.

Trust me, I get it – when you’re battling PMS symptoms, you’d rather curl up in bed than drag yourself to the gym. But the more sedentary your lifestyle, the more sluggish your digestive system likely is, which only makes GI symptoms worse around your period. “Regular exercise can improve blood circulation and lymphatic function, which aid in toxin elimination and waste removal,” explains Dr. Virginia Blackwell, a practicing physician and research specialist. And if you’re not up for a high-intensity workout, try a light activity like yoga that can have a calming effect on your body while you’re moving.

If you regularly suffer from menstrual cramps, you’re probably used to popping a pill to relieve your symptoms. But nonsteroidal anti-inflammatory drugs (NSAIDs), like Advil and Aleve, can do more than dampen your period pain – their anti-inflammatory properties can also block the processes that cause your body to bloat. “A couple days before your period, take 200 to 400 milligrams every six to eight hours,” recommends OB/GYN Dr. Kelly Roy. Midol also offers a bloat-relief caplet with pamabrom (a diuretic) that is specially formulated to target period bloating – so you can tell the cashier “The Real Reason” for your purchase and proudly support #PeriodPositivity!

Do you suffer from period bloating? How do you get rid of it? Share your tips in the comments!

How To Get Your Daily Dose Of Vitamin D In The Gloomy Winter Keep Reading
Lower Back Stretches For When You’ve Spent Too Much Time Curled Up On The Couch Keep Reading
Wait — Is Drinking Coffee On An Empty Stomach Detrimental To Your Health? Keep Reading
Hypoactive Sexual Desire Disorder (HSDD): What It Is And Effective Treatments Keep Reading
The 5 Best Ways To Boost Your Immunity This Winter Keep Reading
Leave A Comment
Share
Join the Conversation
Cancel reply
shesafullonmonet_ Follow
View Open