It’s summertime and our houses are hot enough without us having to turn on our ovens. But the heat shouldn’t mean we don’t get our desserts! This summer, while you’re grilling your hot dogs, hamburgers, and corn on the cob, make some room for these grilled desserts as well!

Thank you The Church Cook for the recipe! 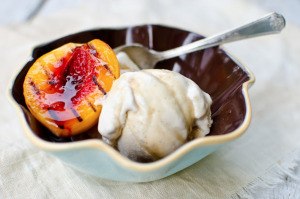 1. Combine the butter, sugar, cinnamon, salt, and bourbon in a medium saucepan and cook on medium heat until the butter and sugar melt, then remove the mixture from the heat.

2. Lightly coat the hot grates with oil. Place the peaches cut-side down onto the grates and cook them for 5 minutes or until the peaches are caramelized. Place the grilled peaches into a bowl, top them with ice cream, and drizzle them with glaze.

Thank you Half-Baked Harvest for the recipe! 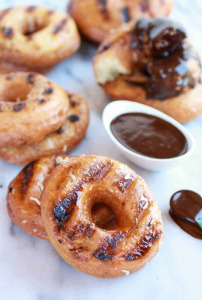 1. In the bowl of an electric mixer, add the sugar to the coconut milk, stir to dissolve it, then add the yeast. Stir the mixture gently, then let it sit for 10 minutes. Melt the butter in a separate bowl and add the beaten eggs, stirring constantly to make sure the butter isn’t too hot for the eggs. Add the egg/butter mixture to the yeast mixture. Put the mixer on medium-low speed and allow the dough hook to stir for a couple of minutes, making sure it’s thoroughly combined.

3. Remove the bowl from the fridge and turn the dough onto a lightly floured surface. Roll it out to ¼ – ⅓ inch thickness. Use a 3-inch cutter to cut as many rounds as you can. Place the doughnuts on a floured baking sheet and use a 1-inch cutter to cut out the middle of the doughnuts. Cover them with a large towel and place them in a warm spot in your kitchen. Allow the donuts to rise for one hour. The doughnuts should be puffy and airy.

4. Make the espresso glaze by combining the coconut water, powdered sugar, and coffee in a medium-sized bowl. Whisk to combine and set it aside while you fry the donuts.

5. Heat a few inches of oil over medium-high heat in a large saucepan. Once the oil reaches 350°F, add the doughnuts 2-3 at a time and fry until golden brown, about 2-3 minutes per side. Make sure you’re using a thermometer and don’t let the oil get too hot. The doughnuts need about 4-5 minutes in the oil. After they’re fried, transfer each donut to a paper towel to let the excess oil drain.

6. Dunk each donut into the espresso glaze, then sprinkle each doughnut with the shredded coconut. Place them on a wire rack and allow the excess glaze to drip off. Store them all in an air-tight container until they’re ready to grill.

7. Preheat the grill to medium.

8. While the grill preheats, combine the milk chocolate and coconut milk in a small saucepan. Heat over low heat until the chocolate has melted. Whisk the espresso powder into the hot melted chocolate until it’s fully dissolved and smooth. Stir in the vanilla. You may also want to melt the chocolate in the microwave at 30-second intervals.

9. Coat the doughnuts with cooking spray and grill the doughnuts, covered, until they’re lightly browned, 30 seconds to 1 minute per side.

Thank you Half-Baked Harvest for the recipe! 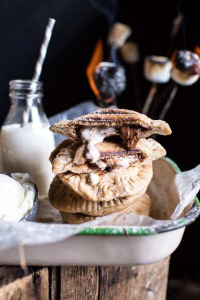 1. In a large bowl, combine water, yeast, and honey, then mix. Let it sit until it gets foamy — about 10 minutes. Add in 1 + ½ cups of whole wheat flour, all-purpose flour, cinnamon, salt, and olive oil. Stir the dough with a spoon until it comes together in a sticky mixture. Using your hands, form the dough into a ball on a floured surface. Work the additional ½ cup of flour into the dough if needed. Rub the bowl with oil, then place the dough inside, turning to coat. Cover it with a towel and place it in a warm place to rise for about an hour.

3. Then, either take the top half of the dough and fold it over the filling or add the top round of the dough. Crimp the edges of the dough to seal it. The s’mores can be placed on a floured cookie sheet, covered, and stored in the fridge overnight until they’re ready to cook.

4. Preheat the grill to medium-high heat. Brush the top and bottom of each s’more with melted butter. Add the buttered s’mores to the grill and grill for 2-3 minutes per side.

Thank you Cooking Channel for the recipe!

1. Preheat the oven to 350°F and place the bananas on a parchment-lined sheet pan. Pierce them a few times with a fork or a skewer. Cook for 10-12 minutes until the banana peels are black, then remove the pan from the oven. Once they’ve cooled enough to touch, peel and mash them as thoroughly as possible.

2. In a medium bowl, stir the flour, baking soda, and salt together. In the bowl of a stand mixer, beat the eggs and sugar on medium speed for 5 minutes. In a slow and steady stream, add the melted butter, oil, and egg until the mixture is blended.

3. Add the buttermilk and vanilla bean paste to the mashed bananas and whisk vigorously. Stir the banana mixture into the egg mixture. Gently fold the dry ingredients into the batter until it’s combined but not overmixed. Fold in the nuts, if you’re using them.

4. Pour the batter into a greased loaf pan and cook for 1 hour. Let the bread cool on a wire rack before removing it from the pan.

7. Chill the sandwiches until the banana bread is frozen, at least 1 hour. Remove the sandwiches from the plastic wrap. Using a serrated knife, cut off a thin piece from all four sides to create a smooth, clean-looking sandwich. Allow them to thaw for a few minutes before serving.

Thank you Crazy for Crust for the recipe! 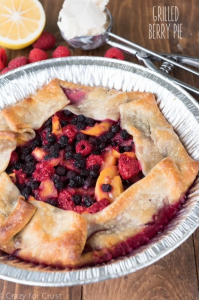 2. Place the berries in a large bowl and sprinkle it with sugar, cornstarch, lemon juice, and zest. Toss the ingredients with your hands.

3. Unroll the pie crust and place it in a disposable foil pie plate. Place the fruit in the center and fold up the edges to form a crust. Brush the edges with heavy whipping cream and sprinkle it with granulated sugar.

4. Place the second foil pie plate upside down on a grill. Place the pie (in its pan) on top of the inverted pan and close the grill’s lid. Cook until the crust is cooked through, 20-30 minutes. Check it at 15 minutes and then every few minutes after to make sure it doesn’t burn.

5. Carefully remove the pie from the grill and cool before slicing. Serve with whipped cream and ice cream!

Thank you Gimme some Grilling for the recipe! 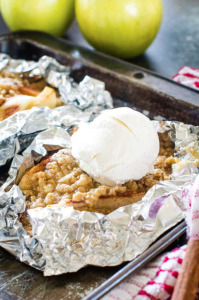 3. Evenly divide the apples between the four pieces of tinfoil.

4. In a small bowl, mix the sugar and cinnamon together. Evenly sprinkle the mixture over top of the apples.

5. In a medium-sized bowl, mix the butter, brown sugar, flour, oats, and baking powder together. Evenly sprinkle the mixture on top of the apple mixture.

6. Fold the foil packets up and seal them. Place them on the grill grates and bake for 20 minutes.

What grilled desserts are you most excited to cook up this summer? Comment below!

For More Summer Dessert Recipes, Read These Articles Next: