Happy end of summer! Transitioning into the fall can sometimes be tough, so we have one final treat for you — a berry dessert recipe roundup! If you’re anything like me, you have a final few summer berries in your fridge that you’re not quite sure what to do with. We’ve got you covered — here are our favorite berry recipes of the summer! 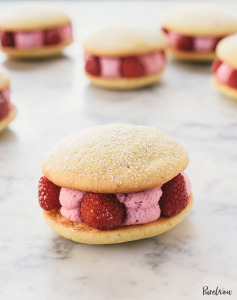 1. Preheat the oven to 400°F and line 2 baking sheets with parchment paper.

2. Cream the butter, sugar, and lemon zest in a bowl with an electric mixer fitted with a paddle attachment. Beat for about 4 minutes, then add the vanilla and egg and mix well.

3. Whisk the flour, baking soda, baking powder, and salt in a medium bowl. Then stir the whole milk and lemon juice in. Add ⅓ of the flour mixture and mix until it’s incorporated. Add half of the milk mixture and mix to combine. Continue to alternate these two mixtures until all the ingredients are incorporated and the batter is smooth.

4. Scoop the batter into ¼ cup-sized mounds onto the baking sheets. Bake until the edges of the cakes begin to brown and the center springs back when you touch it — about 10-12 minutes. Allow the cakes to cool completely.

5. Whisk together the jam and cream in a medium bowl. Cream the butter and the powdered sugar in another bowl with an electric mixer until the mixture is light and fluffy — about 3 minutes. Pour the raspberry cream mixture in and mix to incorporate. Finally beat in the vanilla. Transfer the frosting to a piping bag.

6. Turn over half of the cooled cakes. Pipe the frosting into the center until it’s half an inch from the outer edge. Place 4-6 berries around the dessert’s outside, pressing them into the frosting so they are flush with the edges of the cake. Place one of the remaining cakes on top and press together gently. Serve within 8 hours. 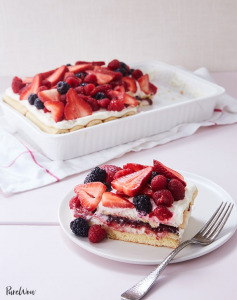 1. Arrange half of the ladyfingers in an even layer on the base of a 9 x 13 inch pan.

2. In the bowl with an electric mixer fitted with a whipping attachment, whip the cream with ¾ cups of sugar until the mixture forms soft peaks. Add the ricotta, cream cheese, lemon zest, cinnamon, vanilla extract, and almond extract. Whip them all together until peaks form.

4. Toss the strawberries, raspberries, and blackberries with the lemon juice in a medium bowl. Add the remaining ¼ cup of sugar and mix well.

5. Pour the berry mixture in an even layer on top of the dessert. Chill for 1 hour to soften the ladyfingers before serving.

Thanks to Well + Good for this recipe!

1. Preheat the oven to 350°F and line a square baking pan with parchment paper.

2. Mix the rolled oats, flour, coconut sugar, lemon zest, and vanilla in a medium-sized bowl. Pour in the coconut oil and stir well. The texture should be slightly crumbly and moist.

3. Press about two thirds of the dough into the bottom of the prepared pan. Top the bottom layer of the dessert with sliced strawberries, then top with the rest of the berries. Lightly dust the surface with cornstarch and drizzle it with maple syrup.

4. Sprinkle the remaining dough on top and place the dish into the oven. Bake for 30-35 minutes.

5. Allow to cool before slicing and enjoy!

Thanks to Minimalist Baker for this recipe! 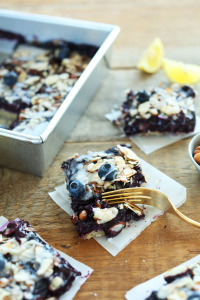 2. Make the crust: add the softened butter and sugar to a mixing bowl and beat until the texture becomes light and fluffy — about 1 minute. Add the flour and salt and mix on low until combined and crumbly. Add the almond milk to form a dough.

3. Transfer the dough to the baking dish and press it down until it’s flat and uniform. Chill the dough in the freezer for about 15 minutes and preheat the oven to 350°F.

4. Bake the crust for 20-25 minutes. Remove it from the oven and allow it to cool, but keep the oven on.

5. Prepare the filling: add all the filling ingredients except the almonds to a small saucepan over medium heat. Cook, stir, and mash the berries for 6-8 minutes.

6. Remove the mixture from the heat and pour it over the baked crust. Top it with the almonds and bake for another 24-28 minutes.

7. Whisk the glazed berries and almonds together and drizzle it on top of the dessert. Cut the pie into 9 even bars and enjoy! 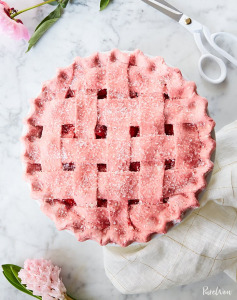 1. Pulse the freeze-dried strawberries and the granulated sugar in a food processor until they become a fine powder. Add the flour and salt and then continue to process until the mixture is well combined. Add the butter and pulse until the mixture looks like small peas, then transfer it to a small bowl.

2. Make a well in the center of the flour mixture and add the ice water. Mix it together by hand.

3. Divide the pie dough in half and form each half into a 1 inch thick disk. Wrap each disk with plastic wrap and chill for at least 30 minutes or overnight.

4. Toss the strawberries, lemon juice, vanilla, and salt in a large mixing bowl.

5. Whisk the granulated sugar and cornstarch in a small bowl. Add it to the strawberries and toss to combine.

6. In another bowl, whisk together the granulated sugar and cornstarch. Add the mixture to the strawberries and toss well to combine.

7. In a final bowl, make an egg wash by whisking the egg white and 1 tablespoon of water together.

8. Lightly flour a surface and roll out one disk of the dough to ¼ inch thickness. Transfer it to a 9-inch pie plate and trim the excess crust around the edges.

9. Pour the filling into the pie crust and then put it in the refrigerator.

10. Roll out the second disk of dough to ¼ an inch thick. Cut it into 1 + ½ inch-wide strips from the dough. Lattice the pie crust.

11. Chill the pie for 20 minutes and preheat the oven to 425°F. Once the oven is ready, brush the surface of the pie with the egg wash and sprinkle it with sanding sugar. Bake until the crust begins to brown slightly and the filling is bubbly — about 40-45 minutes.

Thanks to Life Is But A Dish for this recipe! 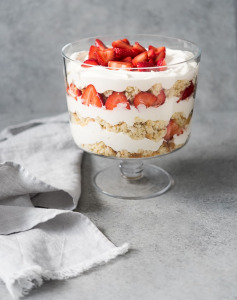 1. Preheat the oven to 400°F. Spray an 8-inch round baking pan and set aside. Sift together the flour, baking powder, baking soda, sugar, and salt in a medium bowl. Add heavy cream and stir to combine.

2. Pour the mixture into the prepared pan and bake for 20-25 minutes. Remove the cake from the oven and cool completely.

3. In a separate bowl, add the strawberries, sugar, and lemon juice. Stir to combine and set aside.

4. In a bowl or a stand alone mixer, beat the cold whipping cream until soft peaks form. Add the powdered sugar and vanilla and beat for another 1-2 minutes.

5. Once the cake has cooled, begin to layer crumbled shortcake at the bottom of the pan. Follow with a layer of whipped cream, then strawberries. Repeat the layers until the ingredients run out. Cover and store in the fridge until it’s ready to serve! 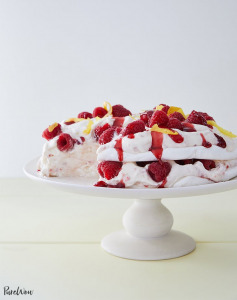 1. Preheat the oven to 300°F. Line two baking sheets with parchment paper. Use a marker to trace a 9-inch plate and turn the paper over.

2. Fit an electric mixer with a whisk attachment and whip the egg whites with cream of tartar in a bowl on medium speed, until the mixture is light and frothy. Increase the speed to high and gradually add in the granulated sugar, continuing to whip until the mixture holds stiff peaks.

3. Divide the meringue between the two prepared baking sheets. Use the tracings as guides to spread the meringue.

4. Put the meringue in the oven and reduce the temperature to 250°F. Bake until the meringue just barely begins to turn golden at the edges — about 60-75 minutes.

5. Turn the oven off and let the meringue sit until the oven has fully cooled. Continue to cool the meringue for an hour and carefully remove the parchment paper from the layers.

6. Use the whisk attachment to whisk the heavy cream with the confectioner’s sugar until it makes soft peaks. Add the lemon curd and raspberry jam and mix to combine.

7. Place the first meringue layer on a serving platter. Spread half of the whipped cream mixture on top and sprinkle half of the raspberries and lemon zest. Repeat this for the next layer and serve immediately.

Are you excited to bake these berry desserts? Which one was your favorite? Comment below!

For More Desserts, Check Out These Recipes:

I Tried Microwavable Mug Cakes, And No, I Won’t Make Anything Else Now

Love Crumbl Cookies? These Dupe Recipes Can Be Made At Home