Because Matt Bettinelli-Olpin & Tyler Gillett’s new addition to the popular Scream franchise is officially titled simply ‘Scream’ – just like Wes Craven’s 1996 original film – I’m going to be referring to the new movie in this review as Scream 5 for less confusion, since all the previous Scream sequels are titled numerically anyway. And before anyone can even ask the current filmmakers why they would make the title to the latest sequel so frustrating and erroneous, don’t worry. There’s literally a direct, self-aware reference to it in the middle of the film.

When Scream 5 was first announced after Craven’s death in 2015, followed by announcing a mid-January release date, naturally horror fans assumed the latest effort would be just a lazy cash-grab. And it kind of is — yet it makes the absolute most out of one of the most paint-by-numbers franchise formulas in the screen medium. In fact, I would say this might be the boldest Scream movie to date.

Despite the franchise’s usual trio of Neve Campbell, David Arquette and Courteney Cox featured all over the marketing, the horror legends actually take the backseat for most of Scream 5. The movie opens with a traditional death scene, only this time it’s subverted to a near-death scene with victim Tara Carpenter (Jenna Ortega) surviving and spending most of the movie in the hospital. Her older sister Sam (Melissa Barrera) and Sam’s boyfriend Richie (Jack Quaid) instantly visit Woodsboro to support the young girl. Tara’s friends and classmates, Wes (Dylan Minnette), Chad (Mason Gooding), Amber (Mikey Madison) and Mindy (Jasmin Savoy Brown), all just happen to be horror fans who become dedicated to figuring out who’s dressing up as Ghostface for another murder spree. 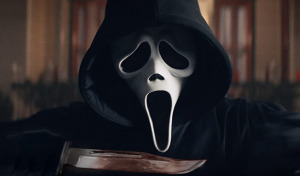 Marley Shelton from Scream 4 (2011), Heather Matarazzo from Scream 3 (2000), and Roger L. Jackson as the regular voice of Ghostface all return this time around too. Some movie fans have noticed there was quite a lot of meta-narrative running throughout new releases in 2021, and now 2022 with Scream 5. Sometimes the tactic works, such as Jon Watts’ Spider-man: No Way Home, Joanna Hogg’s The Souvenir (2019-21) features, Mia Hansen-Løve’s Bergman Island, P.T. Anderson’s Licorice Pizza and Sean Baker’s Red Rocket. Sometimes it really does NOT work though, most glaringly in Lana Wachowski’s The Matrix Resurrections.

The Scream film series has been ahead of the curve with 4th wall breaking and tongue-in-cheek jokes for the past 25 years, so this is far from new territory for the creators. But boy, this new one might as well have been re-titled Meta, because of how intentionally obvious it is. In nearly every other scene characters are making references to rumors and tropes regarding both the real-life productions of the films and also the storylines of the in-universe ‘Stab’ films that are just copies of Scream itself.

There comes a point where a couple of characters are even describing a cliché plot device that ends up actually happening in the film, but it’s more predictable than clever. If this new meta trend is going to be a regular thing for a while, I can already tell it’s going to wear me out with how many fans I can see trying to excuse bad filmmaking as ‘intentionally irreverent.’

That said, some fresh things do still happen in Bettinelli-Olpin & Gillett’s picture. There are just as many guns as there are knives this time, a kill in broad daylight, and more ‘serious injuries’ than flat-out instant deaths (albeit a bit unrealistically). We get a Psycho-esque shower sequence with a male actor rather than an actress, and I enjoyed how the young characters were more interested in indie/artsy horror rather than just slashers. Quaid has surprisingly decent comedic timing, and the new youngsters seem like they’re having fun (especially Brown and Madison). It’s always nice to see Campbell, Arquette and Cox, even if they’re given less to do this sequel. Barrera is passable as the female lead, but I personally kept finding it distracting how much she resembled a pre-famous, pre-makeover Kim Kardashian. 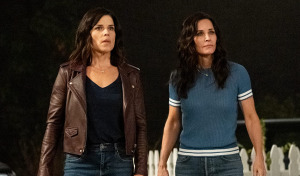 Scream 5 is technically unnecessary and redundant, but you could also say that about any of its predecessors. And judging by the feedback from both the critics and box-office, it really doesn’t seem to matter as long as you’re having a good time.

Are you a fan of the Scream franchise? Do you think it’s still entertaining two decades later? Let us know in the comments!

For More Entertainment And Media, Check Out These Articles:

Mission Accomplished: ‘Lightyear’ Is A Blast On The Big Screen Keep Reading
For Father’s Day, We’re Celebrating These Legendary Father-Daughter Duos Keep Reading
Ranking The Jurassic Park Movies From Best To Worst Keep Reading
Pick Between These Workouts And We’ll Tell You What New Emoji You Are Keep Reading
Why Is Amy Schumer Getting Blamed For The National Tampon Shortage? Keep Reading
Leave A Comment
Share
Join the Conversation
Cancel reply
shesafullonmonet_ Follow
View Open