I’m sorry! I’m sorry! I can apologize from now until the cows come home and still, there would be someone else I’ve disappointed, some expectation I haven’t met. Maybe the cows took off because of something I said.

I learned to be sorry from the nuns who hovered in the background of my girlhood. They frightened me terribly with their otherworldly superiority. My memory renders them as tall, spindly-fingered figures with all-seeing, hollowed-out eyes, shrouded in black, like creatures from Tim Burton’s imagination.

I’ve mostly blocked out past associations. I’m no believer, but catechism class indoctrination holds fast, and I still do this one weird thing every night: I examine my conscience. I really do. I lay my book aside, shut the light, take the big breath, and curl into myself and around my, you know, conscience. (I picture it as situated just under my soul, which is somewhere between the left trapezius muscle and my upper ribs, behind my heart.)

I have the same worries everybody else has, money and health and love, but for whatever reason — get out of my head, Sister Mary Joseph — just before I slide into sleep, it’s all about who I may have offended. As a kid, that inquiry centered around God, how I’d sinned against “Him,” and concluded with an apology. In fact, here it is, branded across my brain:

O my God, I am heartily sorry for having offended Thee, and I detest all my sins because of thy just punishments, but most of all because they offend Thee, my God, who art all good and deserving of all my love. I firmly resolve with the help of Thy grace to sin no more and to avoid the near occasion of sin. Amen.

As a little girl I murmured this “Act of Contrition” nightly in my little-girl bed as if He were listening for it. Like the poems and song lyrics I absorbed as a kid and could recite or sing without effort, words I knew by heart, the nightly apology prayer is still in my heart.

When I’m doing my pre-sleep rebuke-apology-mantra combo, I don’t think He is listening, but I sure am. I review the sins I’ve committed, which, in my contemporary existence, for better or worse, are kind of dull. Did I covet my neighbor’s husband? That would be Larry, who is lovely but whom I definitely do not covet, except when I need a piece of furniture moved. Did I forget to respond to a needy friend’s email? Birthday greetings to a cousin? Was I too harsh with a daughter? Did I work hard enough, long enough, smart enough?

I think what I’m doing is closing out the Me of one day and setting up a better Me of tomorrow. What acts of contrition must I perform to get there? I think I’m on my way to a better Me, and then I turn around, and there’s something else.

Recently, I did not meet a professional expectation. This has rarely happened to me, not because I’m so great but because I am so paranoid about not finishing respectably in the late-bloomer overachiever race I’m always running. Excuses, excuses, but in my defense, I was busy achieving elsewhere, as a daughter, and as a wife and mother, back when that all held different cultural currency.

Anyway, for this project, the opportunity was promising, the deadline was tight, the direction somewhere between let’s-wing-it and exacting. I missed cues, I made assumptions, I muscled through. I got it wrong. I messed it up. The project lead was less than thrilled. I’m still obsessing over the “feedback” — not sugar-coated — in the wake of handing in my work.

I realize as the spoon scrapes the bottom of the carton of my latest obsession, Caramel Cone, that with all my conscience-examining and amends-making, I’m never on my own list. I never apologize to myself for being so hard on myself, for punishing myself because I made a mistake, for not once pausing to allow that the job I screwed up was not one I purposely sabotaged. My shortcomings were human: time pressure, missed communication, fuzzy assumptions. I am human, which means I am imperfect, as are we all, even Sister Mary Joseph.

So I will continue to do that one weird thing. I’ll examine my conscience, but I’ll expand the prayer because now, I am listening for it. I am heartily sorry, for having offended Me, and I firmly resolve with the help of my own grace and experience and humanity to lighten up on myself.

When was the last time you were hard on yourself? How did you apologize? Share the ways you lighten up on yourself in the comments below! 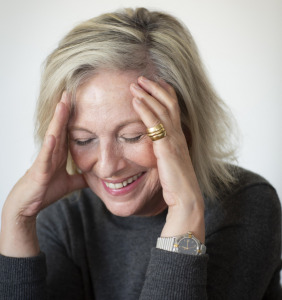 Stephanie Gangi is a poet, essayist and fiction writer. Carry the Dog is her second novel. Her acclaimed debut, The Next, was published by St. Martin’s Press. Gangi’s shorter work has appeared in Arts & Letters, Catapult, Dame, LitHub, Hippocrates Poetry Anthology, McSweeney’s, New Ohio Review, Next Tribe, The Woolfer. She lives in New York City, where she is at work on The Good Provider, her third novel.

Catch Up With More ‘Sorry Not Sorry:’