The following article was written for She’s a Full on Monet by Flint, a schoolteacher determined to create a safe space for their queer students.

When straight people imagine what coming out must be like for queer people like me, there are generally only a couple of narratives they can picture:

But the real truth is that understanding who we are is a slow, confusing, and unclear journey, and the cards are stacked against us right from the get-go.

You see, especially in Western society, we tend to assume that babies are straight.

You may be throwing up your hands in protest now, but think about it. Long before children develop voices of their own, we tend to project our hopes for their future on them. We might comment when our toddler is playing with the girls at daycare that he’s going to “break hearts” one day, or that he has a “little girlfriend” next door. We buy onesies that say “Ladies Man” and “My daddy says I’m not allowed to date”.

And while these small moments feel harmless, they add up, especially as our child grows. I’ve seen it.

I’ve been an out queer high school teacher for the last decade, and there has never been a shortage of students who are struggling with figuring out who they are, especially students who are fighting against the phenomenon I just explained, commonly called “compulsory heterosexuality.” They grow up in families that are not explicitly homophobic, but aren’t especially forthcoming about any other options. Their parents may be outwardly supportive to people outside of their circle, but haven’t even considered that their own children might need more overt messaging that they haven’t been prescribed a heterosexual and cisgender future.

Take for example a student I’ll call Alex, who came into my room looking for advice about how to come out to her mother. No, she didn’t think her mother disliked gay people, but she thought that it was likely she wouldn’t accept her. Why? Well, Alex had spent the last sixteen years in a family where her father changed the channel when gay characters appeared on television, where her brother casually used anti-gay slurs when playing video games, where her mother had taken her to baby and bridal showers, nudging her on the shoulder to say “I hope you find a man like that someday.” She’d never read a book where a main character was like her, never listened to love songs that acknowledged that she existed.

For her, the message was clear: “You don’t belong here.” To come out now would mean admitting to a lie that she hadn’t even been part of making. Being anything other than straight was now deceitful by default because of the story about her that had been crafted by everyone else.

So, what’s the cure? What’s the antidote to compulsory heterosexuality? How do we show all of our kids, the cisgender and the trans, the straight and the gay, the asexual, pansexual, nonbinary, and bi, that they have the space and freedom in our families to be who they want to be?

Well, it’s time to stop assuming all of our children are straight, and start providing them with worlds where there are other options.

In my classroom, that looks like an entire queer library. 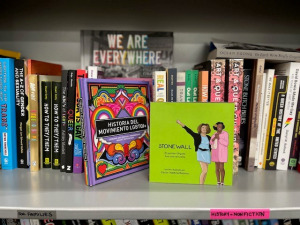 Started about seven years ago by a student who is now out changing the world as a confident queer adult, my library is stocked (via community donation) with books meant to showcase to students that there are people like us in every part of the world, and that we’ve always been there. There are books about our history, comics showcasing the diversity of our lives, memoirs detailing the lived experiences of generations before us. For a student just beginning to learn that they aren’t living a lie simply by existing, it’s exciting to learn that there are so many titles written just for them.

Titles like Everything You Ever Wanted To Know About Trans* (But Were Too Afraid To Ask), a book with en entire glossary for those who are just beginning to learn about themselves or a transgender loved one. It includes information about dating, talking to parents, and the ins and outs of medical and social transition.

Or This is a Book for Parents of Gay Kids, a how-to guide that students can read with their parents to navigate the questions that they might not even know how to answer yet.

And The Stars and the Blackness Between Them, a novel detailing Black immigrant experiences with queerness written in an engaging and accessible way for teen readers.

Also And Tango Makes Three, a children’s book that proves it’s never too early for young people to understand the essential truth that what really makes a family is love. 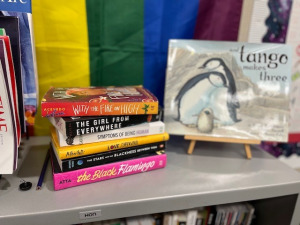 And though many families are supportive of their queer children, many more are not, so my library (unlike a school or community library) doesn’t ask students to leave their names or information, and I don’t reach out for returns. Often, books leave and never find their way back. During the height of distance learning during the pandemic, students wrote in requests, and I sent out brown paper care packages with texts that carried them through the months of isolation that were hard on all of us, but especially challenging for students who felt even more alone at home.

But the cycle can be broken much sooner than that by people who have access to loving and supporting their children long before they ever make it to a classroom like mine. It starts by accepting early that parents can shape a child’s relationship with themselves much earlier than they realize, and that the way they talk to their children matters.

It might seem small, but even just an “I’ll always support you, no matter who you are or who you love” can be exactly what a child needs to hear.

If you would like to support my classroom library with a donation to keep it running, check out our “needed books” list at www.tinyurl.com/SJHqueer.

What are your thoughts on Flint’s library of LGBTQ books for teens? Share in the comments!

Want To Read About More Social Issues? Check Out These Articles: