Somehow I’ve managed to stay away from all the hype surrounding The Bachelorette for all its 15 seasons. But when I came downstairs to my roommate watching the first episode of this season, I decided to half pay attention. It seemed moderately interesting, so I watched the whole episode later.

Let me just tell you, this show has just become my new favorite guilty pleasure.

I immediately knew I wanted to report on my experience of losing my Bachelorette virginity, so I started taking notes. Here, for your reading pleasure (hopefully), is my play-by-play of The Bachelorette, Season 16, Episode 1.

These previews are making this season look particularly dramatic, but I feel like they probably do that every season…

Okay, so they’re flashing back to February. I think this girl was the runner-up on the last season of the Bachelor? She is absolutely not surprised that she’s the next Bachelorette, there are cameras there filming her reaction…but good job acting surprised on her part.

Love this one shoulder sparkly dress. I’d keep watching just for the dresses.

Wait — “each and every time” you’ve gone on the Bachelor and Bachelor in Paradise? (I didn’t even know the second one existed.) How many times have you been on these shows?!

Why does the host have SO MANY ROSES on his desk?

She’s bringing her dogs? Is that normal/allowed? (*Note: I did some research and apparently it is allowed, but this is the first time it’s happened.)

What do they normally do for the first 10 minutes of this show? They’ve just been talking about COVID. Is that why this is a 90-minute episode?

Wait, is she dating all 31 men at the same time?! That sounds stressful. I don’t even think I have 31 friends right now, let alone 31 men doting on me.

This seems like a recipe for disaster…31 men in the same place, fighting over one woman? That’s probably what makes it good reality television, though.

Every one of them is SO SURE she is his future wife! She can’t marry all of you! Most of you are wrong!

These men are wimps. COVID tests don’t hurt THAT bad. I’ve had two and I dealt with it better than them.

I already do not like this Yosef dude. He’s pulling the daughter card. Just seems a little sketch.

FOR REAL, what happens in the first 20 minutes of this show when there’s no COVID?

I don’t understand, out of 31 men does she really expect to find one she wants to spend the rest of her life with?! I’ve met way more than 31 men and only maybe one or two could I ever have seen myself spending the rest of my life with…

Why are they all toasting to the same woman? They have to just not like each other automatically because they’re competing for her, right?

Okay, looks like it’s time to meet all THIRTY ONE guys…

Meeting (some of) the Men

I really like how they’re all going to come up to her and say something along the lines of, “I have a really good feeling about this.” Bro, she can’t marry all of you!!

Man #4: Jordan M. is wearing velvet shoes and pants that are way too short. She is touching his chest and he is very tall and I’m still uncomfortable. “Just in case you’re thirsty, I’m your tall drink of water.” I would not find that attractive.

Man #5: Jason! I like him already. He’s basically Chris Pratt and also fat Thor from that one Avengers movie and I am here for that. Clare, can I have him if you don’t want him?

She’s not going to remember all of these names. Maybe she quizzes herself with the names on the pictures like Cheryl in Miss Congeniality.

Man #9: Mike brought her sparkly flip flops. How does he know her shoe size?

Man #11: Blake Monar is a male grooming specialist and it shows. Go Blake!

Man #12: Tyler C. is rolling up in a station wagon. We love it. It looks like this very cute southern boy lawyer is moving in. 10 bucks he did not actually “pack up his entire life.” I bet those suitcases are empty. 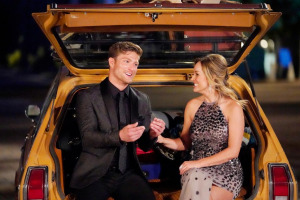 Man #13: Bennet gets fancy music and a Rolls Royce. He looks like a prince. Bennett’s even a prince-y name. I’m a little obsessed but he looks pretentious but he looks prince-y. I have very mixed feelings about Bennett.

Man #20: Eazy. I like his pink suit a lot. She’s his “first round draft pick.” I think that’s nice but I don’t know what it means, but I think it has to do with football? Also I want to be his best friend.

Man #21: Jay showed up in a straightjacket? She’s a little floored by that and, quite frankly, so am I. It’s a no from me. “I think magic will be in the air.” Gross gross gross.

Man #23: Demar came in with a parachute and said “I may have fallen for her already.” I need to know if he actually parachuted in. The other guys are impressed by that one.

Man #24: Healthcare salesman Ed is in a bubble. Like, one of the big plastic ones you can roll around in. He’s struggling to get out, and it looks like he just got birthed by a giant…well, you know.

Man #25: Yosef, whom I’ve already decided not to like. He brought her moon pies and they look store bought. Yosef is very offended the guys are calling them thin mints and cookies. 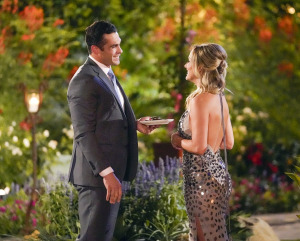 Man #27: Zach J. the cleaning service salesman. He opened a ring-sized box and there is a man with his butt out that makes a fart noise. Is that supposed to be attractive? I hate it. Next. 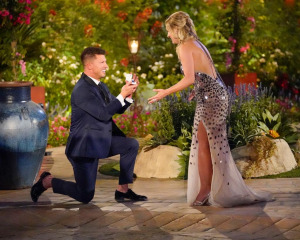 Sorry, did Clare just say she’s having fun doing this? I would be terrified.

Man #29: There is magical music playing for Dale. He lifted her up which is hot. He’s also talking a lot. Aw, he seems like a sweetie. She likes him a lot.

Oh, Chris is coming over. Are we done meeting the men? Either way, there is something going on inside this lady right now.

I still don’t know how these guys are all in the same room talking about how they want to marry the same girl, and they’re laughing and joking about it? That’s not realistic. Sorry.

31 men is way too many men. They’re all clapping for her as she walks into the room. They’re like little puppy dogs around her. This is wild, I can’t even imagine. Part of me does want to be doted on by a room full of men though.

Yosef just winked at her. Gross.

So it’s the evening now and she’s had a really big day. Does she now have to sit down and have a conversation with each of these men?! How do you do that?

Ooh, she’s outside with Dale. She’s obviously smitten. They’re both empaths and “everything feels very natural with him,” apparently. I hope she keeps her options open though. He’s just a man, Clare.

Ok, Ben is doing one of those hammer bell things from carnivals. How did he get that there? Could they pick anything to do with her? What are the limits here?

Mike’s putting the flip flops on her…I like those shoes. Where can I get them?

Aaaaand she’s bowling with the guy in the plastic bubble. Like, while he is in the bubble. In this moment she probably feels very powerful. Also, major points for creativity on his part.

What is a “First Impression Rose”?

This guy is STILL in a straightjacket and Yosef thinks he’s going to get the first impression rose. He’s also pulling the dad card again. Having a kid does not automatically make you a good man!! 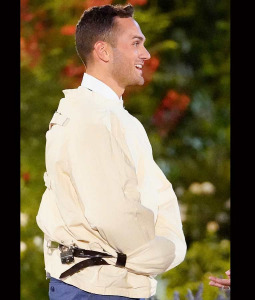 Oooh, DRAMA already, between Tyler and Yosef! I knew Yosef was a bad egg.

Apparently Yosef’s been flirting with Tyler’s friends on Insta. Scandalous. Tyler says he “doesn’t want to make a scene.” My guy, you’re totally making a scene. Yosef says he “doesn’t remember” that happening. I call BS.

CLARE IS UPSET AT TYLER AND NOT YOSEF?! Sorry girl, I’m on Tyler’s side. But I also decided not to like Yosef from the start.

“If I was going to message someone, they would respond to me.” Does Yosef even hear the words that he is saying. Message me, I won’t respond.

Now she’s talking to bearded dog guy Blake. We like him. But apparently he reached out to her during quarantine and that’s against the rules. But she’s happy about it? So she likes a rule breaker. He is visibly relieved at this revelation.

All these men practically explode every time she comes into a room. Oh, to have that kind of power in a room of men…

Aaaaaand Dale gets the first impression rose. Are we surprised? Eh, not really. Blake is super upset though. Why am I starting to get weirdly invested in this?

THIS GUY IS STILL IN A STRAIGHTJACKET.

YOSEF. Get me out of here right freaking now. Maybe they told her to keep him on for further drama. That has to be what happened, right?

I feel bad for drama Tyler though. He didn’t deserve that.

Clare says it’s been a “long and exhausting night.” Honestly, same and I’m just an observer. Sleep easy, girl, you deserve it.

This episode was definitely juicy and it’s not hard to see why so many people love this show! I’m a little ashamed to admit that I’m hooked. I’ve never been one for reality TV, but watching Love Is Blind (and being obsessed with it) pushed me to give The Bachelorette a try. I’m strangely invested in all of these people now…but I guess that’s what reality TV does! Time to catch up on the rest of this season!

Are you a Bachelorette fan? What do you think so far? Let us know in the comments!

If You Liked This Bachelorette Review, You May Also Like:

No Plans Tonight? You Need to Binge Watch the Haunting of Bly Manor

The Monet Book Club’s Favorite Reads, Watches, and Listens of the Month