For someone who’s been firmly placed in the B-list his whole career, film director Sam Raimi sure has made an impact on Hollywood. He helped bring gore to general audiences with The Evil Dead (1981); revitalized the superhero movie genre with Spider-man (2002); and was a big mentor to filmmaking legends Joel & Ethan Coen at the beginning of their careers.

Following a decade-long break from the big screen, Raimi is back in his comfort zone for the second Doctor Strange feature in the MCU: Doctor Strange In the Multiverse of Madness. Like a lot of my generation — who still has memories of the original Spider-man trilogy in theaters — I was all on board to see what the filmmaker would give us.

After successfully helping save the universe in the Russo Bros’ Avengers: Endgame (2019), Stephen Strange (Benedict Cumberbatch) is back to saving NYC in Multiverse of Madness. Right off the bat, we get Stephen saving a teenage girl, America Chavez (Xochitl Gomez), from a giant octopus monster. He senses they know each other, and America reveals that they actually are acquainted in an alternate universe. America has superpowers which can make her travel all over the multiverse but doesn’t know how to control said powers. At the same time, Wanda Maximoff (Elizabeth Olsen) is tempted to channel her former superhero identity, Scarlet Witch, to steal America’s powers for her own selfish reasons. 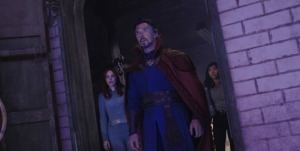 Rachel McAdams, Benedict Wong, and Chiwetel Ejiofor reprise their roles from Scott Derrickson’s Doctor Strange (2016). Along with Raimi’s return to the comic book film genre is his previous Spider-man composer, Danny Elfman. The combo of the two men back in familiar territory should be a nice return for movie fans, and it does feel like that for the first hour or so.

Raimi’s recognizable directing style and signature quirks were great to see in a theater for the first time since Oz the Great and Powerful (2013); and arguably even better here in Multiverse of Madness than Oz. If anything, we’re reminded his vibrant and showy aesthetic is best enjoyed with a fantasy story. With the exception of America’s introduction, we also don’t get any blatant damsel in distress moments, which used to be a regular complaint about the female characters in Raimi’s pictures.

I should note that, in general, Dr. Strange isn’t one of my favorite MCU superheroes, and I haven’t watched Marvel’s “WandaVision” (2021) limited series, which is, apparently, very relevant to Multiverse of Madness. Having this in mind, I was a little underwhelmed by the end of the new movie. I was happy to see Raimi’s specific direction stand out in such a well-oiled celluloid machine as Marvel; but I also felt like his graphic trademarks were out of place with fight sequences in this franchise.

Olsen is fine as Wanda/Scarlet Witch, while newcomer, Gomez, is very cute and has potential for a future acting career. I know I’ve mentioned this in the past, but I’m still not sold on English Cumberbatch as American characters. There is a whole scene with various superhero cameos that should be fun; yet, instead, feels a little redundant, since we just got a similar gimmick in Jon Watts’ Spider-man: No Way Home (2021). Overall, I just wasn’t as invested in the plot or characters this time around.

Between the two movies, presently in theaters, featuring alternate universe themes, I would go with Daniels’ Everything, Everywhere, All at Once.

Do you like ‘Doctor Strange?’ Are you excited for his second solo feature? Let us know in the comments!

For More Entertainment And Media Articles, Keep Reading Below:

Quiz: Tell Us Your Opinion On These Foods And We’ll Tell You Which ‘Stranger Things’ Character You Are Keep Reading
32 Celebrity Mental Health Advocates Dish On Their Own Experiences Keep Reading
Guess The Quote: Lin Manuel Miranda Or A Children’s Book? Keep Reading
In Honor of Mother’s Day, We’re Honoring These Iconic Hollywood Mother-Daughter Duos Keep Reading
Quiz: Tell Us Your Biggest Fears And We’ll Give You A Comfort Show To Rewatch Keep Reading
Leave A Comment
Share
Join the Conversation
Cancel reply
shesafullonmonet_ Follow
View Open