Valérie Lemercier’s Aline is one of the most bizarre experiences I’ve had watching a movie. Without even getting into the quality of the film or whether it’s worth watching, this new music biopic has already gotten a lot of attention for one unique, strange decision (as in, this is pretty much all anyone who has seen Aline is talking about). Lemercier not only starred, wrote, and directed the film herself, she even played the title character in the childhood sequences…with extensive CG special effects to de-age her into appearing 12-17 years old.

Note: Lemercier is currently 58 years old. The absolute creepiest scene in the movie is when we first see Aline at age 5, and yes, it’s Lemercier’s face superimposed onto [I assume] a real child’s body. To any film producers or studio executives who just happen to come across this review: please do NOT make this option a norm with productions. No one should be feeling this awkward and uncomfortable watching a movie.

Beyond the strange choice to have Lemercier act and appear like a literal adolescent, Aline is, essentially, your generic film based on a real-life superstar, in this case, Céline Dion. Dion seems to be ignoring the existence of this movie [I can’t say I blame her], yet, all of the posters, trailers, other promotional marketing, and even the opening text state Aline is “heavily inspired by the life of Céline Dion.” Lemercier and the producers beat the lawyers and nay-sayers to the punch by not even bothering to attempt a direct interpretation of Dion’s life, but some of the Canadian legend’s songs are still featured throughout, including ‘My Heart Will Go On.’ All of the dialogue in Aline is in French with real Quebecois actors cast (excluding Lemercier, who is French). For all the effort that went into making the star appear juvenile, she actually doesn’t do her own singing and is dubbed by professional singer Victoria Sio. 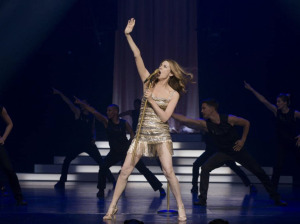 Here, the musical jewel of Quebec is Aline Dieu, and Lemercier portrays her as the most naïve, socially awkward, overly emotional woman ever. While it makes sense for this grown woman to act immature and ignorant in the first hour of the film, Aline’s personality doesn’t grow in the second hour. Even by the time the character is an adult, she still plays her as a little girl who doesn’t have proper manners at the dinner table or in public. We should be grossed out by the courtship she has with her aging manager, Guy-Claude Kamar (Sylvain Marcel), but are too distracted by the ridiculous de-aging effects and Lemercier’s performance that we barely notice the inappropriate romance.

Once the effects are completely gone, the movie’s mainly boring. Neither Aline nor Céline have scandals with drugs or affairs to sensationalize, so we focus a lot on her taking extra good care of her voice and trying hard to conceive a baby. Amusingly, the character portrayed as the biggest victim in the story is Aline’s paranoid, protective mother, Sylvette (played by Danielle Fichaud). She just couldn’t say no to her perfect, talented daughter and pushed her into a singing career in 5th grade. Something tells me that’s probably not how it went down with Céline.

The most hilarious part, and probably the only scene I got a kick out of, was the ending, which blatantly and unapologetically rips off the final scene of Bradley Cooper’s A Star is Born (2018). Between the bad editing transitions, sloppily transcribed subtitles, corny comic relief, and predictable plot, I would normally not recommend Aline to movie fans. But the CG de-aging in the first half is so unusual and hypnotically perplexing, I’m recommending it strictly for anyone who needs proof as to why proper casting and practical effects are still needed when making films. Although, I would skip the theater and just wait until it shows up on your preferred streaming service.

Do you like Céline Dion? Does ‘Aline’ look somewhat interesting to you? Let us know in the comments!