Are you just coming out later in life, or just realizing you’re attracted to women? Or maybe you’ve known for a long time, but you’re finally ready to acknowledge and live out this part of your true self? Congratulations, and welcome to the wonderful world of being a woman who loves women!

There are some very special and unique things about loving women — things you need to know so you can orient yourself to this new world, prevent unnecessary confusion and hurt, and have the kind of love and passion you’re longing for. I’ve been out of the closet for 40 years now and teaching lesbians and queer women about dating and love for many years, too, through the Conscious Girlfriend Academy. So, here are my top ten tips for women coming out later in life.

It takes enormous courage to go against culturally-engrained programming and prejudice, and honor your deep emotional and sexual longings for other women. And, it’s worth it. Relationships with women are different, deeper, more dimensional, more exquisite. There is far more intimacy possible than most heterosexual couples could ever imagine, much less achieve. Women have 150,000 more neurons devoted to bonding than men do! So, at their best, lesbian relationships can be like “best friend” and “lover” in one package.

2. Be Ready for Emotional Intensity

Although lesbian relationships can be the best relationships on the planet, they can also be harder. More intense. More emotional. Hey, you don’t get all that depth at no cost! Women who come out later in life often say that relationships with women are entirely different than relationships with men. Because of all the bonding and intimacy, there are also more triggers. It takes emotional intelligence, self-awareness, and plenty of skill to navigate these depths in healthy ways.

Studies of homosexual behavior in sheep have found that this is exactly what happens with ewes. What a female sheep does to indicate sexual receptivity is…stand still. So, there could be a lot of female sheep out there really wanting each other but not connecting. Same with female humans, unfortunately.

For that reason, a lot of classes in the Conscious Girlfriend Academy aim to help women break this frustrating stalemate. (By the way, just because one woman looks more “butch” or masculine than the other doesn’t mean that woman necessarily can, or wants to, initiate…anything. More on that below.)

Just as it has taken great courage for you to get to this point, and it likely hasn’t come without pain, every other lesbian, bisexual, or queer woman you meet will have her own courage, herstory and pain story. This is an amazing thing about our community. It creates such depth. We are all such survivors, such warriors for love and desire! You might feel afraid of being judged for coming out later. It could even happen. But the more you can cultivate curiosity for what other women in the community have gone through, and their unique wounds and resilience, the more easily you’ll be able to connect, make friends, and find a girlfriend, too.

5. Be Honest About Your Intentions

So, you might as well know up front: some lesbians mistrust bisexual women, or women who have recently come out and don’t have a lot of lesbian experience yet. A lesbian might be afraid of being your experiment or your plaything. She might worry that she’ll fall in love with you and then you’ll leave her for a man or change your mind about your sexual orientation.

If you run into this kind of fear, try not to take it personally. It’s not about you. This experience actually has happened to many lesbians, sometimes over and over, and it can leave a residue of fear and mistrust, even hostility, toward you as a new lesbian or proudly bisexual or pansexual woman. You don’t deserve that hostility. But if you remember that it comes from someone else’s hurt and fear, and just give it a wide berth, it’ll be easier to avoid hurt.

And if you are just experimenting, be honest with yourself and others about that if you don’t want to leave a trail of broken hearts in your wake. Some women will be fine with being your girl- or boi-toy. Others will feel set up, led on, toyed with in a bad way, and all kinds of other unpleasant things. Date and make out responsibly, please!

6. Be Aware of the Wide Spectrum of Gender Identities

The lesbian and queer community has a wonderfully complex array of genders. Yeah, we’re all women who love women, but there are many, many shades and expressions of “woman” and, actually, some within our community who don’t identify as women at all. Meanwhile, others do identify as women, even if they technically have penises or things other people might see as penises — which are actually differently-shaped vulvas — because gender identity doesn’t always line up with genitals. 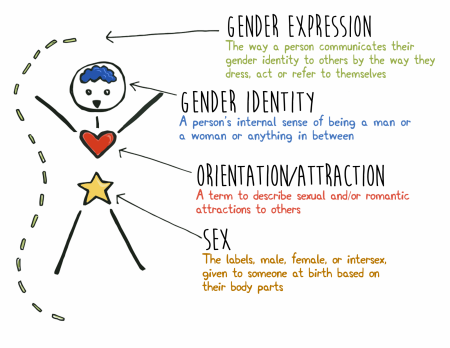 There are people who were Assigned Female At Birth (AFAB), which means that when they were born, the doctor said, “It’s a girl!”, but who don’t currently identify as female, regardless of their body parts. They may identify as trans men or they may not. There’s a lot of liminal space within the queer community, space where someone doesn’t have to be either/or, female or male. That’s why some people like terms like non-binary.

There are other people who were Assigned Male At Birth (AMAB) and may or may not still have the genitals they were born with but identify as trans women who may also be lesbians or bisexual.

In my heart and community, there is room for all of us — but not everyone agrees. Some lesbians feel strongly that only “women born women” (people assigned AFAB) are true lesbians. Others feel equally strongly that “self-identified women” (people who feel strongly that they are women, regardless of their genitals) are lesbians if they say they are. Lesbian and queer communities aren’t above the human fray, and humans tend to go to polarized “us and them” a lot. So, within our communities, there are often fights about these things. Sigh.

7. But the Gender Nuances Don’t Stop There!

At first, the gender nuances and differences among lesbians and queer women might seem confusing, alienating or frustrating to you. You might think, “Why can’t we just all be women with women, end stop? Why does it have to be so complicated?”

But over time, you may come to appreciate the enormous creativity and freedom with which the lesbian community understands nuances of gender. Here’s a quick overview:

8. What Are You Attracted To?

To make it even more complicated, many women are specifically attracted only to other women at a specific place on the gender spectrum. For instance, some femmes are exclusively attracted to masculine of center, soft butch, stud, and butch women. Of course, there are also femmes attracted only to other femmes. And there are many women whose attractions don’t line up so neatly and who are open to women with a variety of different gender expressions.

Within some parts of the lesbian community, there is also a lot of granularity about preferred sexual roles. This can, but doesn’t necessarily, correlate with the varieties of gender expression described above.

If you don’t yet know “who you are” and what you prefer in these ways, that’s not surprising, and there’s nothing wrong with you. There is simply far less room in the heterosexual world to claim or even understand these nuances in your sense of your own gender, or the energetic, psychological, and physical dynamics you prefer in bed. You don’t have to know any more than you know right now — and, as you go about your new life, you will, undoubtedly, learn more. And you might find yourself at home with some of these labels, or you might find that none of them fit well, or fit for long.

One of the wonderful things about engaging in lesbian/queer culture is that there is a vast and ever-changing vocabulary and menu of identity and sexual options available to you to try on, play with, and explore. You go, girl! Or boi. Or whatever you are, and whoever you turn out to be.

So, consider this your official welcome to the wonderful, infinitely rich world of lesbian love. You’re here, you’re queer (unless you dislike that label), and I hope you’ll find and create everything you desire. As one woman I know told me when she was struggling to come out, she took comfort in a kid’s video that said, “Gay means ‘happy.’” Yes! Gay can mean happy!

But wait? Speaking of desire, what about S-E-X? How come I haven’t mentioned that? How can you actually know what another woman likes in bed and give it to her? Stay tuned for another article…or check out the many classes available at the Conscious Girlfriend Academy.

Have you recently come out? Do you have any advice for anyone thinking of coming out later in life? Share your story with us in the comments below.

Ruth L. Schwartz, Ph.D., is the director of the Conscious Girlfriend Academy, the leading global resource for lesbian dating, love, and sexuality education and support. She is the author of eight books, including the Amazon bestseller Conscious Lesbian Dating & Love, and has taught at eight universities. She lives in Northern California and teaches worldwide via Zoom.

Read These For More Insight Into Your Relationship Style: