I always viewed juicing as something only cool people could do. The vegans, the girls who went to spin classes, the husky owners — they juiced. But this week, I became one of them.

I had never used a juicer before this month but had always been curious. I love health and wellness and juicing seemed to be the thing all the health influencers did. I have never done a juice cleanse (and still won’t), particularly because I love food and juice doesn’t do anything to quell my appetite.

But I tried juicing this month and, honestly, it improved everything about my life.

I almost did a juice cleanse when I first received my juicer (I’m very excitable), but after doing research about cleanses, I found that they might not be the best idea.

One of the problems about juice cleanses is actually due to the juicing process itself. When you’re putting vegetables and fruits in the juicer, it strips them of their fiber. You know, all the skins and bits that the juicer discards? That’s all fiber.

I don’t need to get into why fiber is important in your diet…that would be shitty (wink, wink). It balances your diet, gives you healthy gut bacteria, helps you feel full, and keeps your blood sugar from going up too quickly (oh, and it helps you poop). Because the juicer strips your fruits and veggies of their fiber, practicing a juice cleanse can create a significant caloric deficiency in your diet and might lead to fatigue, headaches, cravings, dizziness, and muscle and bone loss.

That’s not to say that juice isn’t good for you – just that living only on juice probably isn’t the best idea.

There are a ton of benefits to juicing, lack of fiber aside. Everyone should be eating much more fruits and vegetables than they are. (I am everyone.) Drinking your vegetables is one solution to that problem – because it takes so many fruits and vegetables to make one glass of juice, it’s an easy way to add more of those vitamins and minerals to your diet.

Juicing also gives you more energy. I know I rely on my morning cup of coffee like it’s my lifeline. But if you add more leafy greens, citrus, beets, and ginger to your diet (especially in the AM), you’ll get more energy, naturally. They also will provide you with more vitamin B, which is always a win.

Juicing takes the benefits that eating a fruit and vegetable-centered diet gives you and multiples them. Yes, you will be missing out on some benefits, but you’re also going to increase the amount of produce you eat by making it easier to access.

Even though I didn’t dive head-first into the juicing culture and juice everything in my fridge (it was very tempting, don’t get me wrong), I still fell in love with juicing.

I had always assumed a juicer would be on my wedding registry or a birthday gift. I saw it as an extravagance, something I could live without, but would really love to have — as soon as I bit the bullet. That is, until one of the internet influencers I follow got a juicer. Then it was all I could think about.

Once I got my juicer, I realized how much I was missing out on.

I have to be honest, I avoided juicing for a bit. I got the package and, in a serendipitous moment, my friend got a package from Misfits Market that she gave to me. That meant I had total access to two boxes full of fruits and vegetables.

But I still avoided using my juicer because I was a little intimidated. I think I have machine fear. I don’t use new things because they scare me. Please, don’t get me started on my air fryer.

Plus, most of the juice recipes had at least two ingredients that I didn’t want to eat and I wanted to avoid going out and getting more ingredients because I was also working with so much.

But one night, I was alone and the fruit from Misfits Market was going bad, so I knew I needed to take the plunge. I didn’t follow a recipe, which is ironic for someone who writes recipes, and I, honestly, threw everything in the juicer.

After decimating a few apples, some pears, a bit of ginger, honey, celery, and other ingredients that I cannot remember, I had made my first juice. And I was hooked.

Was it the best juice ever? No. But it was shockingly great, considering I put in, literally, everything I could find.

My partner adores orange juice, so I bought a bag of oranges, juiced the whole thing, and got about 2 cups of orange juice. Another thing I quickly found out is how much produce you need to make just one drink. Thankfully, the drinks are strong and I didn’t drink one bottle full every time I made it.

I bought glass bottles from Amazon and washed my old kombucha bottles to reuse them and, suddenly, I was in business. I tried my luck in making ginger shots and green juices, this time with a recipe. While I modified them a bit, I think these were more exciting to make because I knew they would make something good.

I think my favorite thing about having a juicer in my house is that it’s an easy way to use those fruits and veggies that are about to go bad. We all know the feeling – we go to the grocery store and get too many fruits, assuming that we’ll make the right decision, stay in, and eat healthily.

I certainly overestimate myself because I constantly have rotting fruits and end up wasting too much food. But with the juicer, once things start to take a turn for the worse, I just grind them into juice!

Something everyone warned me about with the juicer was how obnoxious it is to clean. I’m not going to lie, it takes a bit — I timed it. Once you get all the ingredients out, the juicer set up, the juice juiced, and everything cleaned, it takes about 40 minutes. That’s why I often made my juice at night when my day was done.

I also had trouble getting the rinds out of the mesh blender at first – then I remembered that my juicer came with a long scrub brush and it took care of the clean-up, immediately.

My coworker also suggested getting a spare grocery bag and throwing all the fruit scraps into it so you don’t crowd your counter or clog your disposal. This helped a bunch because I had so many scraps – plus, it makes them easier to compost!

But all in all, juicing is my new favorite thing and if you’ve been debating buying one, I swear it’s worth it.

If you need some inspiration for juice recipes, we’ve got you covered! Here are my favorite recipes I used this month.

Thank you tastylicious for the recipe! 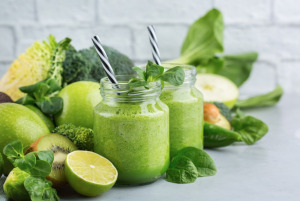 1. Put all the ingredients, one at a time, into the juicer and blend!

Thank you Foodie and Wine for the recipe! 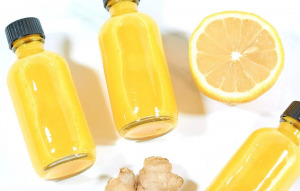 1. Wash the ginger with a brush and juice.

2. Remove the peel from the lemons and juice.

3. Add the cayenne pepper directly to the juice and stir (or shake) it to combine.

Are you ready to start juicing? Do you already have a juicer? Comment below!

For More Markey Tries It Articles, Read These Next: