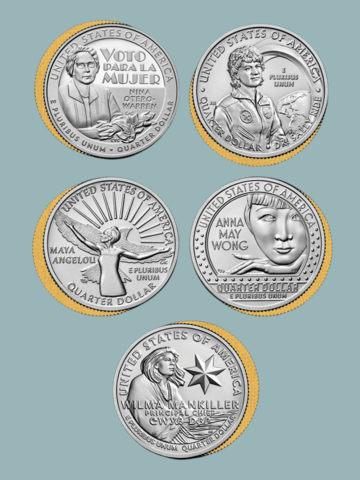 In January 2022, rolls of shiny new quarters began making their way across the United States, minted with historic new imagery: renowned writer and civil rights activist, Maya Angelou; physicist and astronaut, Dr. Sally Ride; the first female Cherokee Nation chief, Wilma Mankiller; suffrage movement leader, Nina Otero-Warren; and Hollywood’s first Chinese American actress, Anna May Wong. These are the first women that the US Mint is recognizing as part of its American Women Quarters Program, a series that will issue up to five quarters annually between 2022 and 2025 to recognize pioneering American women and their contributions to history. In this episode, we discuss why these new quarters are so significant, particularly for young women and girls in the US, and the opportunity that our currency offers us to say something about our country, our values, and the progress we have made. We also touch on the backlash this decision has received, dive into the story behind each woman represented on the new quarters, and the types of conversations that we hope these coins will spark, as well as the importance of making a positive impact, no matter how small! If, like us, you’re into history, politics, and feminism, you’re sure to enjoy today’s episode!

Key Points From This Episode:

“This is a huge step in the right direction. Hopefully, that bill or act to replace Andrew Jackson with Harriet Tubman [on the $20 bill] will happen, because that would be really cool.” — Kelly Castillo [0:10:00]

“They didn’t have to stop at those five [likenesses]. There are so many incredible women in history. If you were going to replace the currency, who would your personal choices be?” — Megan Block [0:12:35]

“Hopefully this helps people, even Americans who may not be as familiar with all five of these women, to go on Google and look up this person and see who [they are] and read about it and be interested.” — Kelly Castillo [0:21:49]

“Including certain communities is still a great step forward, but you have got to try your absolute best to include all communities; especially communities who get continually ignored.” — Megan Block [0:28:05]

“[This] will spark, hopefully, a lot of cool conversations within families and within communities. You’re holding your change in your hand. It’s right there to talk about.” — Kelly Castillo [0:31:08]

The Who Was? Show

She’s A Full On Monet

She’s A Full On Monet Discussion Board Facebook Group