Thank you Jehan Can Cook for the recipe! 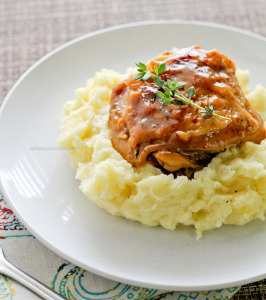 1. Wash and dry the chicken, then sprinkle both sides with salt and pepper.

2. Heat the oil over high heat in a large pot. Once the oil is hot, add the chicken skin-side down. Cook the chicken until it’s golden brown — 5-7 minutes. Then turn the chicken over and cook the other side for another 5-7 minutes.

3. Remove the chicken from the pot and set it aside. Reserve 1 teaspoon of oil from the pot.

4. Return the pot to the stove and cook the onions, garlic, rosemary, and thyme for 1 minute. Add the apple cider and mustard and stir the browned bits from the pot into the sauce. Finally, add the chicken and bring the mixture to a boil.

5. Cook the mixture until the sauce has reduced and thickened, basting the top of the chicken occasionally.

6. Remove from the heat and serve!

Thank you Pinch of Yum for the recipe!

1. Preheat the oven to 375°F. Run the walnuts through a food processor until they have a chopped texture. Arrange the chopped walnuts on a small sheet pan and toast it in the oven for 8-10 minutes. Remove the pan from the oven and toss with the rosemary, butter, sugar, salt, and pepper. Set it aside to cool.

2. Cook the pasta according to the package directions.

3. While the pasta cooks, heat the rest of the butter in a skillet over low heat.

4. Add the garlic and sauté the mixture until it’s fragrant, but make sure not to brown it. Add the pumpkin and broth and simmer until it’s smooth, then add the cream and salt and simmer until the sauce coats the back of the spoon. Finally, squeeze in some lemon juice and add the pasta to the cooked sauce.

5. Serve the pasta in shallow bowls with a sprinkle of walnut crispies and a sprig of rosemary to top!

Thank you Lexi’s Clean Living for the recipe! 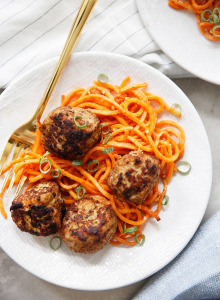 1. Preheat the oven to 375°F and line a rimmed baking sheet with parchment paper.

2. Add all the ingredients to a large bowl and mix until everything is fully combined, then form the mixture into 12 meatballs.

3. Heat a large skillet over medium-high heat. Once it’s hot, add the oil, then the meatballs, taking care to leave enough space in between each. Brown the meatballs on all sides, about 2 minutes per side.

4. Transfer the browned meatballs to the prepared baking sheet and bake them in the oven until they’re fully cooked through, about 10-15 minutes.

5. Serve the meatballs with noodles or pasta!

Thank you PureWow for the recipe!

2. Stir the pumpkin puree and broth into the pot. Season the soup with salt and pepper, the bay leaf, thyme, and sage. Cover the pot and simmer over low heat until the soup develops a good flavor, about 30-40 minutes.

3. Remove the bay leaf and use an immersion blender to puree the soup inside the pot (or transfer it to a blender or a food processor). Finally, stir in the half-and-half.

4. Preheat the oven to 400°F and line a baking sheet with parchment paper.

5. Cut around the stem of each pumpkin to remove the top, scoop out the seeds, wash them, and lay them out to dry. Rub the inside of each pumpkin with olive oil and season them with salt and pepper.

6. Transfer the pumpkins to the prepared baking sheet, replace the tops, and roast them until the flesh is tender but not so soft that it begins to collapse. This should take 20-25 minutes.

7. Use a food processor or a blender to combine the baby kale and garlic. Gradually add ⅓ cup of olive oil with the machine running, then add in the parmesan. Season with salt and pepper and set aside.

Thank you Eating Well for the recipe! 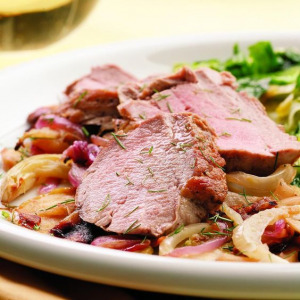 1. Position the oven racks in the upper and lower thirds of the oven. Preheat it to 475°F.

2. Toss the apples, sliced fennel, onion, and 1 tablespoon of oil in a large bowl. Spread the mixture out on a rimmed baking sheet. Place the pan on the lower oven rack, stirring it twice, and roasting until it’s tender and golden. This should take 30-35 minutes.

3. About 10 minutes after the apple mixture goes in, sprinkle the pork with salt and pepper. Heat the remaining 2 teaspoons of oil in a large, ovenproof skillet over medium-high heat. Place the pork on one side for 2 minutes, then turn the pork over and transfer the pan to the top oven rack. Roast the pork until it’s just barely pink in the center and an instant-read thermometer reads 145°F. This should take about 12-14 minutes.

4. Transfer the pork onto a cutting board and let it rest for 5 minutes. Immediately stir the vinegar into the pan, then add in the apple mixture. Thinly slice the pork and serve it with the apple mixture and sprinkle the fennel fronds on top.

Who needs apple orchards and pumpkin patches when you have these amazing recipes! Which recipe is your favorite? What theme would you like to see next week? Comment below!

For More Of Monet’s Weekly Meal Plans, Read These: