Helen Mirren is a Dame.

And not in the “that’s a real classy dame old-timey movie” sense — an actual DAME, a UK title bestowed to a woman equivalent to the rank of knight.

I first saw Mirren in the fantasy movie Excalibur (1981). We saw it in the theater and when she came onto the screen as Morgana le Fay, I was smitten. 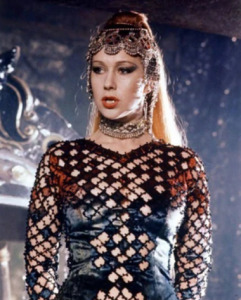 It didn’t matter that she was the villain.

You know when you see a woman and you’re conflicted about whether you want to be friends with her, actually BE her or be with her?

In a career spanning decades, Mirren has starred in over 60 films, playing everyone from Jason Statham’s mum in The Fast and the Furious franchise, to Queen Elizabeth. 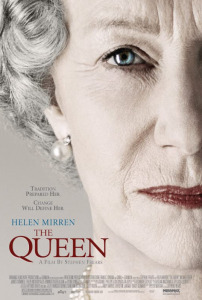 Mirren is also the only person to achieve the Triple Crown of Acting in both the US and the UK, winning an Academy Award and a British Academy Film Award for The Queen, a Tony Award and a Laurence Olivier Award for the same role in The Audience, three British Academy Television Awards for her performance as DCI Jane Tennison in Prime Suspect, and four Primetime Emmy Awards.

And in her spare time, she was shutting down sexist men when other women were too afraid to speak up.

In 1975, Mirren, then 30, shot back at Michael Parkinson during an interview on his talk show, when he came at her with a bunch of sexist bullshit.

The host listed a series of comments theater critics made about her body which was unnecessary, but hey, it was a different time (and unfortunately, not much has changed).

He then had the audacity to question her about whether Mirren thought her body held her back from being a “serious actress.”

“Because serious actresses can’t have big bosoms, is that what you mean?” Mirren countered. “What a crummy performance if people are obsessed with the size of your bosom or anything else.”

No wonder she played the Queen — she’s been one since the disco era with no signs of dropping her crown.

Helen Mirren talked with British Vogue’s acting beauty and wellness editor, Hannah Coates, and shared her advice on a life well-lived, so read these quotes carefully — actual royalty is speaking.

“I always mix it up and do something different. I apply makeup according to how I feel. Usually I apply whatever is immediately to hand in my make-up drawer — I put my hand in and grab the first thing.” 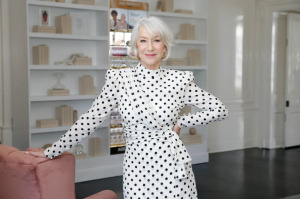 “I like to break my own rules as much as possible. If I’m working with a makeup artist, they will ask what I like and I always tell them that my face is their canvas and to do what they want. We all get stuck in our ruts in the way we make up our eyes, hair or lips — it’s good to shake it up.”

Her Secret To A Life Well-lived

“Don’t feel paralyzed by your own insecurities and don’t be too polite or apologetic in life.” 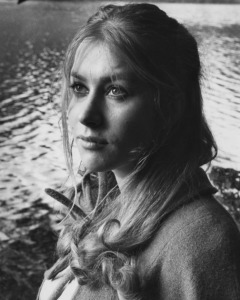 “It’s a very good idea, occasionally, to look at the world as a child or foreigner and witness your own environment.”

When She Began To Feel Most Confident In Her Own Skin

“You grow into it, without question. It was a long time ago but I remember the moment I learned to smile.” 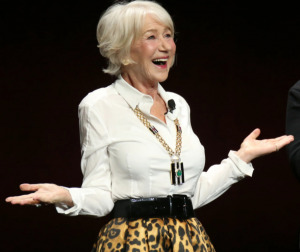 “I always had fat cheeks (and I still do!), so I was always sucking my cheeks in. But you can’t suck your cheeks in and smile at the same time! Then I discovered that, actually, it’s nice to smile openly and with freedom, not a tight little smile, a big one. It certainly has served me in good stead.”

Tips For Getting Ready

“Usually if I have some sort of function to go to, or if I’m traveling or have an interview to do, I sort my clothes out the night before.” 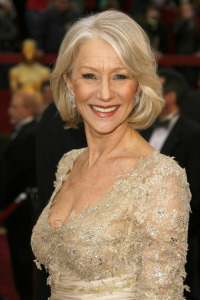 “It means that if I am in a panic in the morning, which I often am because I’m late, I’m not worrying about what I’m going to wear because I know it’ll all work together. That’s the only little thing that I do.”

Mirren says it was very easy for her because her hair was always blonde. She “put lowlights in it in the past — I’ve always done it myself, I never went to have my hair colored; I couldn’t be bothered, it’s so boring and expensive.” 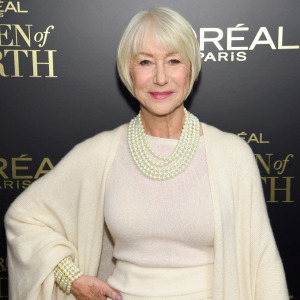 “I think it can be more difficult [to go gray] if you have much darker hair, but the women of my age who have made the leap recently look so spectacular.”

“My advice is to work from the inside out. First of all, take control of your diet and find one that makes you feel good.” 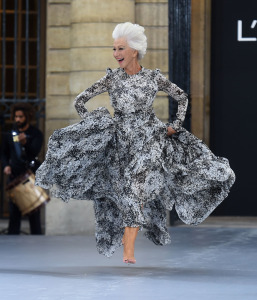 “I’m the first one at the fish and chips, but what you’re putting inside your body does influence how you feel about yourself, so start there.”

“The next thing is exercise, which doesn’t mean joining expensive gyms. I’m a big believer in the Canadian Air Force women’s exercise regime, which is 12 minutes.” 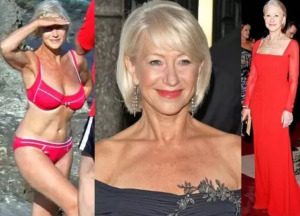 “I’m incredibly lazy and if I can avoid doing it, I will, but every now and then I pull myself back and do what I know works.”

“I’ve done a lot of theatre in my life so the whole idea of walking out to do a show is in my DNA. But what I love about fashion shows is that — unlike theatre where it’s all rehearsed and everyone knows what they’re doing (you hope!) — it’s absolute chaos!” 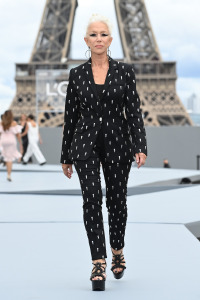 “Somehow, miraculously, there is a moment where you all line up and go on one after another and it all comes together. It all looks perfect and everyone knows what they’re doing and I never quite get it! But it’s really fun.”

Mirren’s interview answers are a testament to why she is an icon.

Not only is she a world-renowned actor, but she’s relatable as hell and has self-awareness in spades. 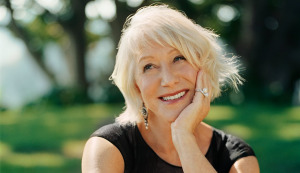 She’s lazy! She colors her own hair! She’s frequently late!

She’s a little bit of all of us, only she’s Dame Helen Fucking Mirren.

What do you think about these Helen Mirren quotes? Let us know below!

For More Entertainment And Celebrity News, Check Out These Articles:

Billie Eilish’s Dress Rocked And Won The Fight Against Fur