Critical race theory is becoming a buzz-phrase in the political world — but this serious subject shouldn’t be. The topic pushes buttons on both sides, with conflicting views and “radical agendas.” But what exactly is critical race theory, and why is it such a hot topic? We explore the different viewpoints, and why it’s currently a controversial subject in schools.

What IS Critical Race Theory?

Critical race theory (CRT) originated approximately 40 years ago, with originators including Derrick Bell, Patricia Williams, Tara Yosso, Richard Delgado, and more. They brought to light the oppression that Black people face within the legal system, and how racism directly and indirectly influences it. Bell, a Black professor at Harvard Law School, wrote “Race, Racism and American Law” in 1973 (it is now in its sixth edition). The casebook touched upon many subjects of racism within the law, such as the Supreme Court’s “color-blind” concept and its negative effect on desegregation.

CRT is defined by Britannica as “a socially constructed (culturally invented) category that is used to oppress and exploit people of color.” Read: critical race theory states that our legal systems and policies have deeply embedded racist ideology within them, and it is not simply an individual’s personal bias or prejudice. You are not born with racism in your DNA; rather, it is so prevalent within systems and policies that this bias is birthed from a sociological context. People are not necessarily consciously choosing to be racist, or choosing to be anti-Black – it’s inherent in society, and those who are racist have been brought up in this societal construct.

When it comes to education of CRT, many schools in America teach grades K-12 about racial inequality and its roots within our history, stemming from slavery to the regular violence against Black people now. Some schools explore the concept of “white privilege”; others simply cover the timeline while emphasizing how the system failed Black people time and time again, and how recent strides toward equality continue to fall short.

Unsurprisingly, this has caused a divide within political parties. Leading the pack of anti-CRT teachings is minority leader Senator Mitch McConnell, who penned a letter with his and 38 other Republicans’ signatures to Education Secretary Miguel Cardona. “Americans never decided our children should be taught that our country is inherently evil,” the letter said. “Taxpayer-supported programs should emphasize the shared civic virtues that bring us together, not push radical agendas that tear us apart.”

Critical Race Theory is wrong. It shouldn’t be taught in schools. And it shouldn’t be funded by the government. pic.twitter.com/l6AJXGcxpQ

The “radical agendas” these Senators were referring to was Biden’s proposed administration rule, in which schools must teach students about systemic racism and how slavery is not in the past.

Republicans have already begun taking stances against Biden, with many states putting (or attempting to put) anti-CRT laws in place. Oklahoma’s GOP governor, Kevin Stitt, put his state’s version of anti-CRT rhetoric into place in early May. Rep. Michelle Udall, R-Mesa, has stated that “propaganda and one-sided ideology” will not be tolerated in classrooms, and that teachers who violate this law, pushing this “propaganda,” will be fined $5,000 and must repay the school for their misstep. And a bill in Ohio requested that schools may not teach that “an individual, by virtue of the individual’s race … is inherently racist” or that “meritocracy or traits such as a hard work ethic are racist … or were created by members of a particular race … to oppress members of another race.”

On the opposite side, Democrats remain conflicted. While more progressive members of Congress (especially those of color) push for open dialogue about racism and its roots in the classroom, some Democrats are hesitant to declare that America is racist at its core. It’s understandable – progressive parties do not want to invalidate those who face racist discrimination within the legal system, especially after the past decades’ many deaths at the hands of police (think: Trayvon Martin, Tamir Rice, George Floyd, and Daunte Wright). Children deserve to know their history, and it’s critical for those of all ages to learn about how they can progress forward, rather than refuse to act against racial inequity.

Critical race theory (CRT) is an academic movement of civil-rights scholars and activists in the United States who seek to critically examine the law as it intersects with issues of race and to challenge mainstream liberal approaches to racial justice.

One of the problems with hesitant stances against “indoctrination” by both Republicans and Democrats: almost 80% of teachers from 2017-2018 were white, while non-white students made up the majority of students in 2018. These students have lived experiences, all of which are valid. By playing devil’s advocate, and therefore showing where the oppressors’ viewpoints come from – especially by a white teacher with no experience being a Black person throughout history to now – there is a large portion of students who will feel alienated, invalidated, or as though the oppressors’ sides are legitimate, if not understandable. In states where racism runs rampant, this is especially dangerous for non-white students, as many already have targets on their backs without the taught legitimacy of racist views.

Parents’ Involvement in the CRT Fight

Parents are taking matters into their own hands and involving themselves in the conversation, too, with both sides convinced that leaving the answer to the government will result in winners and losers.

On the pro-CRT side, there are many organizations spurring protests to continue teaching systemic racism. For example, the Zinn Education Project held a protest in 22 cities, with teachers unions and activists rallying their support for CRT in classrooms. The Zinn Education Project provides free race-centric materials and lesson plans to schools in order to teach students about systemic racism. Many teachers believe in teaching all students about the past. As one teacher told the Tennessee Chalkbeat, “Both history and English content standards require students to think critically. Teachers are evaluated based on our ability to inspire critical thinking. How are we supposed to teach the standards and have our students think critically when we can only present and discuss one side of an issue?”

Teach Critical Race Theory (AKA the truth). CRT will not divide us, it will unite us in our cause for a United States that has liberty and justice for all. It will strengthen our bonds as human beings. It will teach us humility and humanity.#TeachCRT pic.twitter.com/jLWRlfrqJN

On the opposite side are protestors who believe that by teaching CRT, white children will feel guilty for their skin color. While white supremacy is relevant to Black people’s enslavement, CRT does not teach that all white people are supremacists; rather, white people have privilege. Despite this, there are many groups battling back. No Left Turn in Education is a group founded by parents that argues against CRT in classrooms, saying systemic racism has no place there. The group was launched by a parent, Elana Fishbein, who felt that political correctness was taking over in classrooms. She was ignored by schools when she asked for her children to opt out of “grossly biased views.” Her letter received vitriol from other “woke” parents, but the founder soon discovered a community who sided with her; the group now has more than 35,000 outspoken group members.

RT if you think Congress should BAN Critical Race Theory from being taught in public schools!

Critical Race Theory doesn’t belong in our schools or in our institutions. It is a racist ideology promoted by the left that teaches black people that they are the oppressed and white people are the oppressor. CRT only promotes further division and hatred of country. Enough!

We are winning this fight. Parents across the country are revolting against critical race theory in American schools. Keep pushing forward.https://t.co/rBln8Elceq

Here’s the scene in Ashburn, VA this afternoon as parents protest against critical race theory before the Loudoun County school board meets. Scott Mineo, founder of Parents Against CRT, talking to a crowd of about 200: pic.twitter.com/DZLo7beTx4

The Problem of CRT In Government 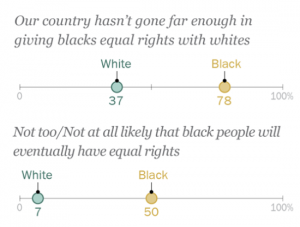 It’s a stark contrast within America, one that causes hesitancy within the progressive party. Democrats don’t want to alienate, but they also don’t want to risk losing support with so many other propositions on the line. Republicans, on the other hand, grasp onto the low numbers from white people and downplay the percentages from other racial groups, claiming they’re making progress — even if the percentages only slightly match these claims.

In the end, the battles both against and for CRT in the classroom will continue for many more years – if not forever. The safety that many feel with being racist has only risen – in the same Pew survey, it was reported that 45% of people felt that, since Trump was elected, it has become more acceptable to express racist views — and children are still being raised with these views, bringing opposition to the classroom. And with Republicans and Democrats unable to compromise, it’s unknown how long this war will wage on within schools. But one thing is certain: there is no denying that CRT is fully accepted as a concept. Only time will tell where it sits within — or outside of — classrooms.

What are your thoughts on critical race theory? Let us know in the comments.

For More Articles On Social Issues, Read These:

Is This A Microaggression? Here’s How To Build Awareness

Child Marriage Is Still Legal, And It’s Closer To Home Than You Think